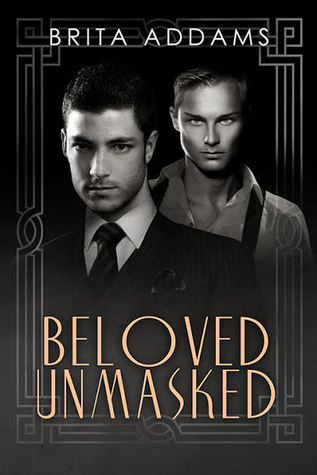 Born in 1898 to a heartless prostitute in Storyville, the red-light district of New Orleans, David comes into the world as Picayune, a name meaning “of little value” or as his mother reminds him, nothing.”

In the early 20th century brothels and clubs, his love of music sustains young Pic until a fortuitous meeting places him on the road to respectability, and Pic reinvents himself as David Reid.

As David realizes happiness for the first time, conscription forces his friend and first love, Spencer Webb, into the Great War. A telegram from the War Department deals a staggering blow and interrupts David’s pursuit of a law degree. He must gather his wits and move forward. While his future looks bright, specters from Storyville return.

The past holds both pain and love, and facing it head-on might destroy David or give him the freedom to live the life he has dreamed.

Beloved Unmasked starts when Picayune is born to a prostitute named Sapphire. Sapphire hates that he is a “get” from one of her dalliances with a john. She names her son Picayune because it means of little to no worth, and that’s how she sees him. They live in Storyville, the legal red-light district of New Orleans. Sapphire, is a total bitch. I can’t describe her any better than that, worse, yes, I could describe her as much worse. She beats and berates Pic constantly. From ten she makes him wash her clients cocks with disinfectant at the Gem, one of Storyville’s brothels. He’s always had to clean her room and he’s always taken the insults and beatings. He sketches, learns to play the piano, and he loves all things music, especially jazz. Pic wants out of the district, out of Storyville, and he doesn’t want to do it by selling himself like his mother has for all of his (young) life. He’s made sure he’s kept up with study, when most of the others don’t, but Pic knows study his a way out.

Pic’s best friend is a working guy, Spence. Spence is six years older than Pic and Spence has no qualms about selling himself – why give it away for free when a lot of men are prepared to pay him top dollar for sex? He helps Pic ‘pop his cherry’ in a ménage with Spencer and Spencer’s client, a high-end lawyer with a big cock, Emile. Spence figures that someone like Pic, someone trying to improve himself, someone who studies, should have a kind, smart guy as his first.

I loved Spence. He was flamboyant. Charismatic. Cheeky. Not ashamed of who he was, what he did, and he loved cabbage roses and to dress in stockings, if given a half a chance.

“You said it yaself more ’an once—you ain’t got nothin’ in this world that matters. Leastwise if yer whorin’, ya can pretend someone cares.”
“Is that what you do? Pretend?”
“You bet your ass I do.” He closed his eyes. “Oh, yeah, Daddy, right there. Fuck me harder. No one does it better than you.” He opened his eyes again. “I give men what they want and can’t get most places. What’s wrong with that?”

At eighteen, finally pushing back at Sapphire, Pic has had enough of his ‘mother’ and approaches Tom Anderson, the “Mayor of Storyville,” to ask for full-time work, instead of part-time.

The unofficial mayor of the District had hired him the year before to take money from customers and pass out the brothel tokens. Anderson also kept Pic’s pay in safekeeping, out of Sapphire’s grubby paws.

Anderson knows Pic is a hard worker and he admires his drive to get ahead and decides if he’s going to make a go of it he has to have a better name than Picayune.

“A working man needs a solid name, and forgive me, son, but Picayune isn’t the kind of name you want in the working world. Would you let me help you with that?”
…

“How about David? Do you know what that means?” Pic shook his head. Anderson put his hand on Picayune’s shoulder and gave it a squeeze. “While Picayune means trivial, David means beloved.”

Pretty soon Emile Dauterive is back in Pic’s life, but this time in a different capacity. He steps in to make the newly named David Reid his ward. Emile concocts a suitable story for polite society to enable David to be able to live at his house. Emile is a lawyer who wants to enter public service. Having David stay with him, go to Tulane and study law, clerk at his law firm, bodes well for both of them. He knows the boy is bright. David knows Emile is gay, and Emile knows David will keep quiet about that, as well as make something of himself, if given a hand. Emile understands what it’s like to have difficulty with parents and finding yourself alone.

Not too long after David starts living with Emile, America enters WWI. While David is too young at nineteen and Emile too old at thirty one to be conscripted, Spence is twenty five.

Spence is called up  to serve, and he’s scared witless – he’s a lover not a fighter. On top of this, after twenty years of existence, Storyville has been closed down because the politicians don’t want brothels near the armed personnel. David’s not sure what to think. Everyone struggles with the dismantling of a place they’ve known all their lives, or for a lot of it. David wants to know that Spence will come back. Spence is devastated and feels pretty sure he won’t. While Spence is in training, and later when he’s posted to France, David and Spence write to one another. Every letter signed – Don’t take any wooden nickels. Pvt. Spencer C. Webb, with a different meaning for Spence’s middle initial , C.

I can’t review any more of Beloved Unmasked because it will be one big spoiler if I do. Just in general, Brita Addams has certainly done her research about New Orleans. About Storyville and the characters who occupied that place at that time in history. Real characters from the era occupied the pages around fictitious ones.

If I had to outline my primary niggle with this book – why 4 stars instead of 5 – it would be that it’s slightly too long. I just felt 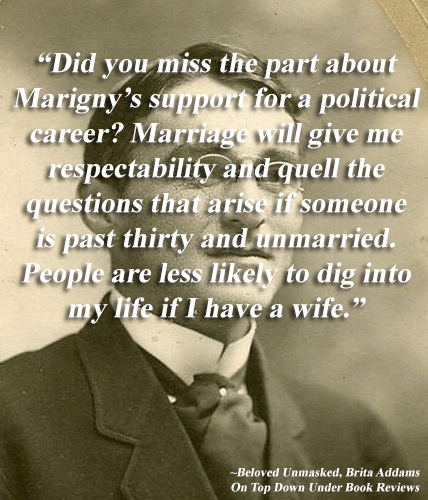 that Ms Addams got so involved with the era, the people and places that, at a point, the primary chemistry of the main characters veered of course for a while. It pulled me out of a pivotal building attachment. I can’t say more than that because it would spoil the book.

Apart from that, I loved Spence, thought Pic/David was strong, loyal and a good guy, who admirably thought of others and remembered where he came from. I also hold a big old soft spot for the lonely and kind Emile. Maybe he’ll get a book of his own.

I read book #1 but I missed book #2 in this series, but it doesn’t matter at all as they seem to be standalones with a common thread of interesting American history. I knew nothing of Storyville when I went in and found myself  looking up more on the people and the times – including this page. http://www.storyvilledistrictnola.com/anderson.html
It’s an incredible story and a fascinating period in history.

Beloved Unmasked has a whole lot more packed into the pages than I can cover without giving things away. However, if the era interests you, if you like the quotes or the premise, then definitely put Beloved Unmasked on your TBR. 4 Stars!

You know that I’ve spent a lot of time in New Orleans over the years, so I’m really into the history of the city. I can tell the author researched well for this book. Thanks for posting the link for the Storyville district. Very interesting reading.

With that being said, this looks like a really nice book. I can tell I would despise Sapphire and would love Spence and the others.

I do know you’ve spent a bit of time in New Orleans, and you’ve had a ball. I wondered if you knew about Storyville because I didn’t know the story at all.

Yes, Brita Addams really did her research and the combining of actual and fictional characters is something she does easily – she did the same in Tarnished Gold.

Sapphire was heinous – no, you would not have liked her – and Spence was the type of character I am drawn to.

Thank you Kazza for the great review of Beloved Unmasked. So pleased you liked it. I am working on Emile’s book as we speak. He does deserve one, after all.

Yes, Emile does deserve a book 🙂