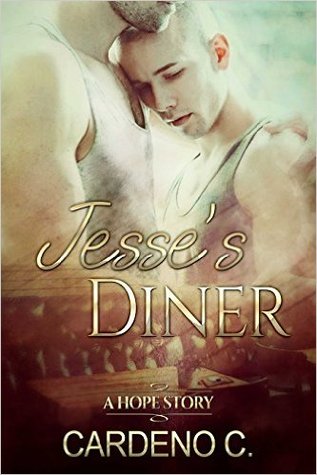 Two men with a shared history and a mutual attraction must be honest with themselves and each other so both their dreams come true.

Quiet, unassuming Tanner Sellers spends his time running a diner in Hope, Arizona. Not particularly social, twenty-two-year-old Tanner keeps to himself and enjoys his simple life, but he longs for someone to call his own. In his most secret fantasy, that someone is sexy Steve Faus. But Steve is his friend’s father and mentor’s widower and therefore off-limits.

Despite some challenges, thirty-nine-year-old Steve Faus has had a good life. He’s extremely successful at work, has a great relationship with his college-age son, and lives in a wonderful town. Eighteen months after losing his partner, the one thing Steve lacks is someone to share his life. If Steve is honest with himself, that someone is the young man he has known and cared about for years. Steve and Tanner want one another, all they need is a little push in the right direction to make both their dreams come true.

Tanner is twenty two and has inherited a diner from his boss, Jesse, who died eighteen months ago. Much like Jesse’s Diner, the quiet and staid Tanner needs a bit of changing up. His best friend, Mike, Jesse’s son, tells him his other dad, Steve, has been asked to take time off from his work because he’s down. Mike’s in Nevada and needs Tanner to check in on him. Like the good person Tanner is, even though he is really nervous being alone around sexy Steve – the man of his six year crush and fantasies – he takes food from his diner over to his house.

Mike was the closest thing I had to a brother, so I’d never had so much as an ounce of attraction to him. Or maybe that was because I’d used up all my attraction tickets on my unhealthy obsession with his dad.

I used the quiet time to remind myself that I was doing my friend a favor by helping my mentor’s partner; I was not going to ogle a hot guy.

From this point, Jesse’s Diner is about the slow-ish burn relationship 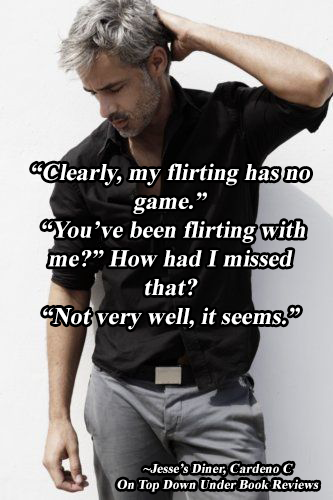 between Tanner and his best friend’s dad. Not to mention the issues with the fact that Jesse was his mentor and he left Tanner the diner – Steve has a good job, Mike is at college, and Tanner fits the town and the diner so it was a good choice. Tanner sometimes worries about that choice. Feels bad about desiring Jesse’s (now widowed) partner. Is clueless to the fact that Steve has developed feelings for Tanner and would like to take their friendship to another level.

I could do this. I could be Steve’s friend. We’d both lost someone important to us when Jesse passed and we both missed Mike since he’d moved away.

Steve was wilder and, typically, carefree when he was younger, and he contracted HIV. He went into (what would end up) his twenty year relationship with Jesse knowing this. They raised a son together. So he’s an HIV+ (family) man looking at going into a new relationship and the way Cardeno C handled this impressed me. It’s a 30,000 word romance novel so, you know, it’s not meant to be the HIV serodiscordant relationship ‘manual’. PrEP was discussed, as were condoms, current viral load, and research, but I liked Tanner’s no fuss acceptance and the lack of drama and stigma attached. It was a part of the overall book, much like HIV+ status is part of a person, but not all of them. The less stigma, the more rational the handling of the topic, the better. Because it is a part of the community I was glad an author made it part of their book without making it about shock value.
**SPOILER OVER**

While Jesse’s diner is somewhat sexy, it’s not particularly steamy. It isn’t angsty. It isn’t dramatic. There’s no big alpha hero or really over-sexed twink. What Jesse’s Diner is, is 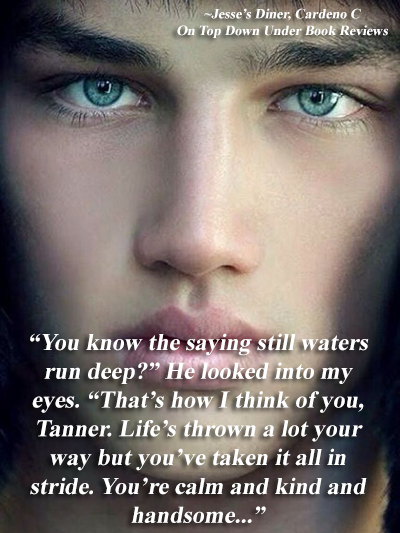 humorous, light-hearted and sweet, with some social commentary. Tanner, the primary voice, is guileless. I like guileless. He’s not a complex character – he’s accepting of his life, he likes his own company, is socially awkward, works hard, is respectful, likes where he lives, and is not too keen on broadening that horizon, and even when he fantasised about Steve prior to Jesse’s passing, he would never ‘cut someone else’s lunch’. All good qualities, in my opinion. Likewise, Steve is a decent, straightforward and patient guy. He’s honest about his status, prepared to give Tanner time to digest it fully, particularly given he’s never been with anyone else, and he’s kind. Cardeno C has written a gentle novella here and I think anyone wanting to spend a few hours relaxing, or maybe cheering themselves up by reading something  hopeful and sweet, will enjoy Jesse’s Diner. One more thing, I don’t know if the dedication at the end was for someone in Cardeno C’s life but it was incredibly moving. 4 Stars!

Amazing review, Kazza! I think I’ll have to give this a shot! 😀

Thanks, Trisha. I do think you’ll really like this story 🙂

I have to start this comment about your first photo. There are no words for how much I love that photo. Just… wow. Your Steve is my opinion of the perfect man. 😉 Now my thoughts on the actual review… I’m all about books with characters who have substantial age differences so that alone would have me wanting to read this. Then there is what you mentioned in your spoiler section. Not many books take that on with one of the main characters. I applaud the author for doing it and for obviously doing it with sensitivity. This looks like… Read more »

I do like that age difference. Yes. Yep. For sure 🙂
The premise grabbed me and I was sold by the writing. You’re right – you have to walk the right line with certain topics. I remember being totally unimpressed with another book handling the same topic within the story. Cardeno C did really well.

Mmm hmm. You are a connoisseur of men pics. He is totally gorgeous 🙂

See, I love CC. all those things that you mentioned in the last paragraph are why I buy his books. That ability to deliver sweet souls to those in need. Gives us hope.
Nice review, Kaz.