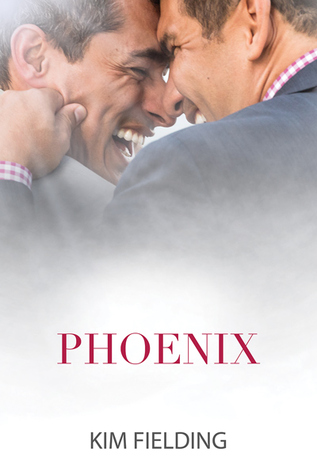 First a soldier and then a diplomat, Juberi now spends his solitary days on a single ambition: trying to resurrect the phoenix, which has been extinct for centuries. He’s not pleased when he is obligated to attend a public ceremony in memory of an elderly friend and former colleague. But at the ceremony, Juberi meets the friend’s beguiling son, Desen. Despite being from a markedly different culture, Desen has much to offer. But after decades of denying his own desires, Juberi fears there is no alchemy that will reopen him to love.

It’s funny. Kim Fielding is an author I always mean to read and always seem to miss connecting with for one reason or another. Nearly every time I read a premise I think, “This sounds so good, TBR it,” and then I miss it. The two I have read by Kim Fielding haven’t been as widely read or reviewed as the others I haven’t read. I don’t know what that says about me as a reader.  *Shrugs shoulders* No matter. This was another really well written and touching novella from Kim Fielding. It’s only 44 pages and it’s originally part of a longer anthology. If you ever saw it in the anthology and you weren’t interested in the others, you can always grab this standalone copy. The other book I read by Ms Fielding was Night Shift. It had mixed reviews but I thought it was terrific.

I’ll say one more thing before the review, I do not know who thought this was a good cover for a fantasy e-book, but they have to be kidding. Yes, the two guys are older, but suits and contemporary styling? Hello…. Fantasy!! And… Juberi is dark skinned, Desen light. Anyhoo… my real review is below…

Juberi is a retired general and ambassador and now, in his fifties, he’s quite the shut-in. He 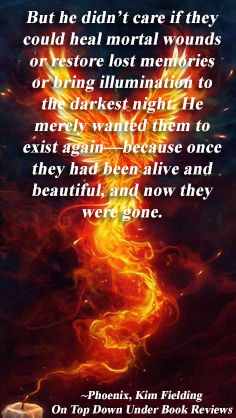 has a housekeeper, Saura, who by his own admission is more like a daughter to him. He has a lab where he likes to spend most of his days working with the feathers of the Phoenix. He’s trying to bring the Phoenix back from extinction – in this book the Phoenix was not a mythical bird.

And someday, if he got the potions and incantations just right, he would transform those feathers into the birds themselves.

But today is a break from the other quieter ones he is so used to now. He has to attend a royal function. His uniform is a little more snug around the belly than it once was, he’ll have to socialise and give a speech. All the things he normally avoids now he must do, with good reason.

He scowled, but she was right. He couldn’t miss the afternoon’s events without causing serious offense. The king was dedicating a new park in memory of the deceased ambassador from Tamrat, and because Juberi had once been ambassador to Tamrat, he was expected to pay his respects. That didn’t mean he had to be happy about it, though.

At the function Juberi meets his deceased best friend’s son, Desen. Desen is around the same age as Juberi and he’s in Kokoto for the dedication to his father. Desen has the utmost respect for Juberi, particularly based on stories and details his father has shared with him over the years. It’s been decades since Juberi was in Tamrat but Desen’s father and mother always kept in touch until their passing. Now Desen has something he needs to ask of Juberi and he hopes he’ll take him up on the offer.

In Kokoto homosexuality is thought of as unnatural and not allowed. In Tamrat it is the complete opposite. All of his life, except the short period he lived in Tamrat, Juberi has had to hide who he is and not show any affection for a man. He does not date women either, so life his has been one of mostly keeping to himself in case something were to slip. Desen’s father knew and accepted who Juberi was. 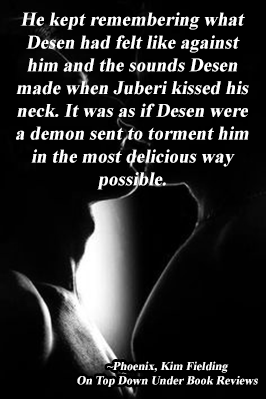 bring the beautiful and vibrant Phoenix, and all it stands for, back from extinction. The parallel of getting older, having an injury or a physical limiter or two, and not allowing oneself to feel passion or live life to the fullest anymore, like Juberi has been doing, is so well written.

Desen finds much that is attractive in Juberi, but will Juberi be able to accept the interest of the honest, free-spirited and attractive Desen? If so, can he allow himself to burn brightly like the Phoenix he wants so passionately to live again?

This is a lovely little story. I really enjoy being transported into a fantasy world and there was enough world-building in here to give me that. I also like older and interracial couples and Phoenix has all that going for it. If you haven’t read Kim Fielding and you like a little fantasy with charming characters – one more outgoing and full of life, the other more reserved and gentle, then pick up a copy of Phoenix. 4.5 Stars!

I love books with older couples and I love the idea of the phoenix because of what it stands for. This looks like a nice story.

Great review, as always, and I love the pics and quotes.

P.S. I feel your pain over the cover. I get irked if the cover doesn’t reflect the book accurately.

I love a book with an older couple, they just don’t get represented enough. Neither do interracial couples, not that that was made a big deal of. But I like that too – until it comes time to make GIFS or memes, they are not represented out there in pics, that is sad 🙁 It is a really good story and I found it when I was cruising Amazon the other day – because, you know, I don’t have enough books on my Kindle 🙂 and I bought it because it sounded so interesting and I thought “aha! Kim Fielding,… Read more »

Yay! I’m so glad you enjoyed your second Kim Fielding book! This is one of the ones I haven’t read yet, but have been meaning to. This sounds like a really great story and I’m even more excited to read it now.

Agree about the cover! Love it for a contemporary story. But I don’t think it works for Fantasy.

I did indeed enjoy it. If you like fantasy and a shorter novella, and I know you enjoy Kim Fielding, then this is a terrific novella for you.

Yes, we agree on the cover for a fantasy, not the right one.