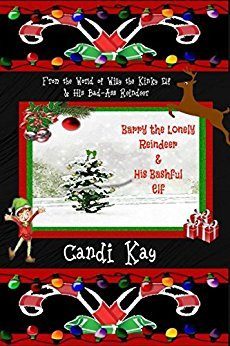 Reindeer Barry Simpson leads a simple life. He works, comes home, then does it all again the next day. Once upon a time, he was outgoing and social. That changed after he became involved with an abusive reindeer. It’s been a year since Barry ran and he’s finally getting over his fears, eager to start living again.

Ricky is a shy elf who blushes at every turn. One accidental touch and Barry’s convinced he’s finally met his mate. He’s never been with an elf before but he knows in his heart that this is the man he’s been waiting for.

Between meddling parents, an overprotective brother, and even a sad Santa Claus, Barry and his elf are pulled in several directions. When his abusive ex-boyfriend starts getting violent, Barry has to fight to protect not only himself but also those he loves, including his newfound mate.

Barry Simpson is an accountant at the North Pole, he’s unique in this series as the reindeer before this book have all pulled, or at least aspired to pull, Santa’s sleigh. When he’s doing some work for Mr Pipton at his lolly store, he meets Ricky the workshop elf for the first time. When their hands touch, some energy passing between them, Barry knows that there is something special about the quiet elf.

Barry is still recovering after having been in an abusive relationship with Ashton Kenton. Ashton is from an old-money North Pole family and he has arrogance to match the temper and the lies that roll quickly off his tongue. He hasn’t “forgiven” Barry for leaving him and is out to cause some trouble. Barry has a few words to say to Ashton when he also turns up at Mr Pipton’s. Ashton isn’t one to allow anyone else the final say and attacks Barry when he’s on his way home from work later that day. Blake happens to be flying over the woods on his way to Barry’s when he sees what’s happening and makes sure he does more than say a few words to Ashton. However, none of Barry’s family know the extent of what Barry went through with Ashton because he’s always kept it to himself. As Ashton keeps harassing Barry, more of the information comes to light. Blake, who is now in charge of tech security at the Pole, makes sure that cameras are installed at Barry’s and he’s extra protective. Blake feels like he has some making up to do for the time he alienated his family before becoming sober. Blake went from being someone I never thought could be redeemed – Evan’s book – to an incredibly strong and caring older brother in this book.

Ricky Elfton has his own issues with an ex. Spencer Templeton is another supposedly upstanding North Pole resident when he’s actually nothing more than a philandering user. He took advantage of Ricky when Ricky was  younger, complete with a youthful crush, all while he had girlfriends and was Ricky’s father’s best friend. So, while Barry and Ricky hook up, Ricky can’t allow himself to believe it will be anything more. He definitely doesn’t want to be someone else’s dirty little secret. It’s hard for him to believe an elf can be the mate of a gorgeous reindeer shifter.

Ricky is a mate-sceptic, as was Barry until he saw Willy and Randy and his brother and Seth. He has no doubt what Ricky is to him but he has issues with an increasingly harassing ex, his mother who is a force of nature, and I mean that in a good way, and an elf mother who I wanted to slap, not meant in a good way. All this is happening while Barry has an elf he wants to get cosy with and needs to convince he’s his mate. 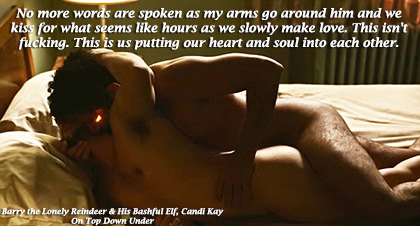 the Kinky Elf series. It isn’t Christmas until Willy has called at least one person a butthead and made his, at times, acerbic opinion known about others. The gossiping at the North Pole has reached new heights, including Willy, although Willy’s is in a well-meaning way. The usual suspects make an appearance, and Santa is moping around the village after pictures emerged at the last Christmas Ball about what he’d been up to with Seth’s parents. Barry’s mum also makes sure to guilt him for not letting her know what’s been happening instead of her hearing it from someone who told someone who heard it from someone else. Although she likes the idea of a new man in Barry’s life.

My mother looks between the two of us a couple of times before her angry expression disappears and is replaced by one of pure joy. I know that look and I feel bad for Ricky because no doubt in the next few minutes he’s going to be subjected to an interrogation that will make one of Randy’s look like child’s play.

Barry and Ricky make a cute couple and they come from similar backgrounds, Barry’s being partner abuse and Ricky’s being an abuse of trust. They are probably quieter after some of the shenanigans of the other couples – no peppermint whisky escapades this year, no attempting to ruin Christmas, but it was a nice change of pace because people/couples are different. Barry has to make Ricky believe in mates. Ricky has to believe in himself and Barry, and Barry has a potential mother-in-law who doesn’t trust reindeer motives, they are a frisky bunch after all. Then there’s Santa, who needs to get his act together before Christmas and make with the ho-ho-ho’s.

This series is fun and goofy and doesn’t take itself too seriously, although there can be a little bit of social

commentary slipped in. I always read one of the books each year and kick back within the surrounds of the magical North Pole and it’s ever-increasing supernatural characters. I also think about sexy reindeer shifters. Hmm, that sounds weird but they are tall and built and not afraid of nudity, so what’s not to like? Willy continues to be sassy Willy and this year Barry and Ricky joined the crew of reindeer and elf (and Seth) who support one another and are like family. Long live Willy. 4 Stars!

I remember well how much you hated the big brother when he was a bad guy. I was surprised last year when you said you liked him in his own story. Willy, mate-skeptic (I love that word), and lots of gossip -on top of the reindeer and elf hooking up. 🙂 Great review. I love the visuals.

Oh yeah, I didn’t like Blake first time and I really could not see how he could be redeemed but he was and he is such a good brother in Bazza’s book. Barry is sweet and so is Ricky. I like the visuals and quotes too – the Christmas one is beautiful and the antithesis of my Christmas weather 🙂

Thank you so much, Kazza! I wanted to slap Mrs. Elfton a few times too. And thinking about sexy reindeer shifters doesn’t sound weird AT ALL. I think about them all the time. 😉 I’m glad you enjoyed Barry and Ricky’s story.

I love the photo and GIF. Thank you again for the review and your support!

I should have added the slapping scene from Flying High as a GIF for Mrs Elfton. No, my reindeer shifter desire is not weird *snort.

You’re welcome for the review and Willy has to insult someone before I know Christmas is coming, lol