Willy the Kinky Elf & His Bad-Ass Reindeer by Candi Kay 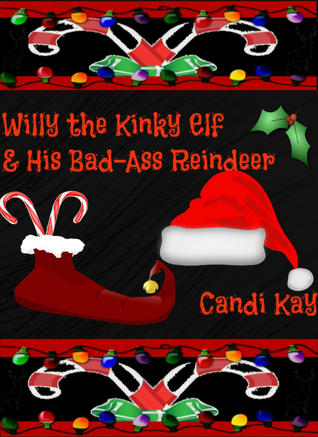 The North Pole isn’t exactly as it appears in fairy tales. It has the elves and Santa and his reindeer, but Santa and Mrs. Claus aren’t the jolly couple the world believes them to be. The elves, while short, aren’t pointy-eared tiny men with squeaky voices. The reindeer are all shape-shifters who transform into gorgeous beings in human form. Feared by all, the reindeer keep to themselves and only associate with their own. Randy the Chief Reindeer is the most feared of all. The largest of the pack at six-five, Santa’s Village breathes a sigh of relief when he takes off on his Harley to parts unknown during the off-season.

Elf Willy is all about kink and will do almost anyone and everyone. The one he wants most is out of his league – Randy the Chief Reindeer. While drunk on Peppermint Whiskey, Willy is dared by the Master Elf to sneak onto Randy’s property to take a compromising photo. Getting caught is a given, as the Chief Reindeer values his privacy above all else. Does Randy kick Willy’s elfy self all the way to Tinsel Town? Or does he mete out a more appropriate punishment for the kinky elf?

Mrs. Claus may be evil, but she knows how to throw a mean party.

Willy is an elf. He lives at the North Pole and is rather fond of a couple of things – sex, Peppermint Whisky and Randy, Santa’s Chief Reindeer… and not necessarily in that order. Willy is a hard worker but Santa is a hard-arse who expects his pound of flesh. Mrs. Claus is known to sleep around and is a cranky old bitch who fancies Randy herself. But who doesn’t? He’s tall, has hair you can run your fingers through, is buff, enigmatic and hung like, well, a reindeer  🙂

The reindeer are shape shifters who, when they shift, are naked and on display, and Willy likes to get his fill of the sexy Randy. So when Master Elf Jason asks him to go to Randy’s well fortified and private house to get a picture of Randy’s cock, it all seems a bit odd. Thing is, if you dare an elf they have to go for it, especially when they have had a few Peppermint Whisky’s under their belt like Willy does. Master Elf Jason may well have another agenda as well.

I’ll also add that the North Pole is turned on its head, the Claus’ are not the jolly people we have read about before, and even though elves are short, they are in the mid five foot range… and they don’t have pointy ears. Also, because Mrs. Claus is such a ho, they are all gay.

Apart from the kink and the fun, I liked the subtle message in the book as well –

“Reindeer and elves don’t mix,” I say into his shoulder. He kisses me on my head, his arm still wrapped tightly around me. “Why don’t they?  When you find the one you’re meant to be with, what does that matter. Elves, reindeer, humans. All that should matter is how you feel.”

This is a really fun, sexy ‘n’ sweet Christmas tale with some paranormal – hello! it is the North Pole after all – mixed nicely together to make for a good read. Candi Kay has never failed to deliver for me so far, and this is actually the only Christmas story I’ve read this season and I’m so glad I did. What’s not to like about an elf being named after his Willy? It is pretty spectacular at 9″, and what’s not to love about a Harley riding reindeer who growls on occasion, and flies his Willy around…and may also deny an orgasm with a cause. Also, whatever you do, don’t violate Union Code 4, Section 12, Paragraph 3 of the elves contract. 4 Ho, Ho, Ho Stars!

Thank you so much for the great review. I’m so glad you enjoyed Willy. Also, thank you for pointing out the message about love being love. I had so much fun writing Willy and Randy’s story, but I do want that message to come across as well. I’m glad it did.

You’re welcome, Candi . I did enjoy Willy 🙂 It was fun but it did have a message and I always notice those things because they are important.

Love your review. REALLY love the GIF. It just stops too soon, damn it. 😉

The bright Christmasy colors on the cover really stand out with our black background.

Ha ha, the GIF IS a good one but it did stop too soon 🙁

I like that cover a whole lot because it says ‘here’s a Christmas story’ so you know what you’re getting with a quick glance. You’re right, It does stand out 🙂