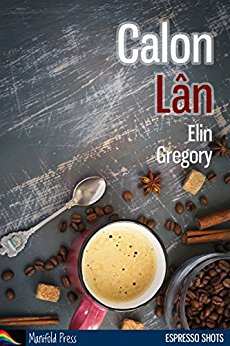 As war rages in France, battles are also being fought on the Home Front.

Bethan Harrhy, farmer’s wife, does her best to keep her family happy as prices rise and the weather worsens. Nye, her husband, is angry and worried. Alwyn, her brother, is injured and shaken by his experiences in the trenches. Her baby is teething and there’s another on the way. Surely having her brother’s best friend to stay, another face, another voice, another pair of hands, can only be a good thing? But when Joe arrives, Bethan is forced to confront ideas she had never even guessed at and makes a terrible mistake.

With conflict at home and abroad, can there be a happy ending for any of them?

You know how you read some books and they just make your heart happy? Well, that book would be Calon Lan. It’s good for your heart and your soul. Once I picked it up I couldn’t put it down until I’d finished.

Bethan is the sole narrator of this story, and a better one I could not have asked for. A famer’s wife, she is gentle and kind and motherly in her ways. I loved her innocent observations and her peacemaking skills. She is close to and 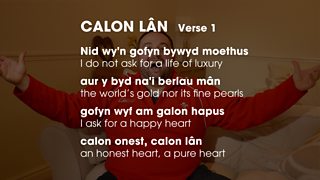 loves her brother Alwyn, who is now home from the trenches. He is partially blind and deaf, with a scarred face and voice. Apart from the obvious, I thought for a Welshman, someone raised with pride in their voice/their singing, it was an extra sadness. Bethan lets us know that Alwyn isn’t the same man he was before he enlisted. The war was anything but an adventure. He is quieter, his voice a whisper, and he doesn’t laugh or smile much anymore. He says nothing of his time away, except when he has nightmares. Then a loud voice full of fear rings through the farmhouse.

When Bethan and Alwyn were growing up the family had another couple that helped work the farm, but they have long since gone. They lived in the other little cottage on their land. Now Alwyn is back he is a blessing as far as Bethan is concerned. With baby George already here and another on the way, Bethan can’t physically help as she did before. Her husband, Nye, also doesn’t want her doing hard manual work. So it’s a given that Nye and Alwyn need someone else, so when extra help is discussed Alwyn immediately suggests his friend Joe Jenkins, quickly sending him a letter to come to Ty-r-Onnen. Bethan is beyond pleased that Alwyn is visibly happy about his friend coming to stay, that his friend can help the family with farming and chores.

There was a note of hope in his voice that made Bethan all the more eager to welcome his friend to their home. In fact, now she came to think of it, Alwyn seemed better. Standing taller, speaking more often in a stronger voice. He had even smiled when she got him to help her fluff up the eiderdown by tossing it high.

There are several arcs in Calon Lan. Nye, who stayed behind to tend the farm while Alwyn enlisted, is bothered by remarks intimating that he was reluctant to enlist. After Joe comes to help, snide remarks about Joe being after Bethan also goad Nye on to voice his insecurities in an unpleasant manner. It’s hard work raising prime horses, sheep, cows with that much more of a shine to them. Alwyn has always had a knack for turning out good animals for sale which also eats at Nye. Although Nye does what he does best – some networking with the men and a few beers at the Abergavenny pub, and Bethan successfully sells the produce alongside the other women, there is jealousy within Nye. Bethan also becomes aware there is more than friendship between Alwyn and Joe. And that Joe understands Alwyn because he has his own wounds.

Calon Lan is a Welsh song which fits this story to a T. All Bethan wants is for her family to be near, for there to be love between them, for them to be happy and safe, to go to church, to work the farm and have enough food to feed them, to be able to sell some extra produce. Nothing grand or excessive is asked for or required.

“And what do you need?”
“My husband, home and my babies – and for my babies to have two loving uncles to help bring them along.” Bethan smiled as Mrs Mortimer nodded her approval. “But a good summer wouldn’t hurt.”

I love short stories when they deliver so much in so few words. This novella may be shorter on page count but it’s huge 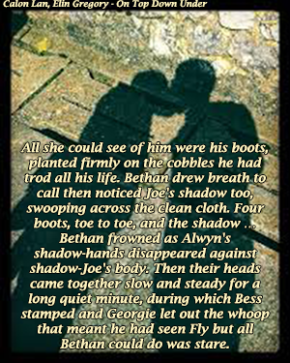 on heart and vivid storytelling. The characters were all three dimensional thanks to Bethan’s patient, kind, and loving eyes. Thanks to the author’s skill. I can imagine both Alwyn and Joe before the war and I just knew how they were feeling when they could be together again. I can imagine this little part of Wales as a rare sanctuary in another time and place for two injured men. Two men in love. Alwyn and Joe’s relationship is sweet, loving, and, quite frankly, perfection. I just know they lived happy lives in spite of their disabilities, in spite of being same-sex attracted in the early part of the nineteenth century.

While Calon Lan is gentle for the most part, there is some conflict. Nye really ticked me off. I had to remind myself of the era and that he was a man of his time, that he dealt with some bullying of his own, but I kept thinking – very loudly – ‘get a check on your insecurity, Nye’. However, Alwyn developed a strong voice when needed, as did Joe. Their mature and charming disposition helped quell a situation that could have been quite disastrous for them all.

“You didn’t hear what they said – running a good farm into the ground, can’t handle his stock, can’t manage without his brother-in-law, the wrong one went, ah, but he was scared to go – you don’t know what it’s like to hear them whisper behind your back.”
“Oh, don’t we just?” Alwyn snorted. “The whispers and sneers – can’t be trusted, all cowards, not real men – and the approaches, the suggestions.”

I’ve tagged this book as WWI (as opposed to WWII).  The use of the word trenches led me to feel that’s correct. 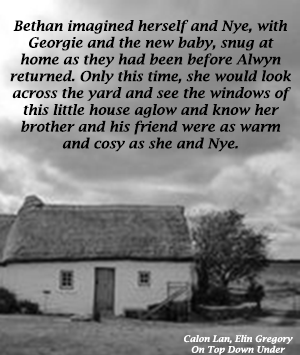 Going to market on a horse and cart, equipment used, swayed me that way as well, but any equipment, including the prosthetic Joe wore, plus the song – Calon Lan – were all about before, during and after WWI. Take my tag as a maybe.

This isn’t a long novella and it’s so everyday that it’s hard to write much of a review to help other readers understand what a gem it is. What a terrific snapshot into a period in Welsh history it offers. Then there’s same-sex attraction seen through someone else’s eyes in a time when gay or homosexual weren’t part of the vernacular. Bethan, Alwyn and Joe are such a delight. Nye offers a look at the relative norm for the time. Every story I’ve read by this author is set in or around a war, clearly I have affection for her war stories, and every single one of them has been excellent. I am so glad I read Calon Lan. I cannot recommend it highly enough. It’s absolutely gorgeous. 5 Stars!

You know it says a lot about an author’s talent when they can say so much in so few words. I usually shy away from historical books but I can tell I’d really enjoy this one. Great review, Kazza. I love the photos and quotes.

[…] “Alwyn and Joe’s relationship is sweet, loving, and, quite frankly, perfection.” Undated review by Kazza K at On Top Down Under Book Reviews […]

[…] I love short stories when they deliver so much in so few words. This novella may be shorter on page … […]

I’d seen this on Manifold’s site but the cover didn’t inspire then I read this review and now I’m sold. Many thanks!

I always pick up Elin Gregory’s books, but I haven’t read this one yet. Now I’m really looking forward to it even more. I’m glad it was such a great read for you!