We love stories about the mind. Think about the most influential genre novels, the most famous examples of cyberpunk sci-fi, or paranormal romance, or spy thrillers. Henry Dorsett Case shoves a plug into his head and enters the consensual hallucination of the matrix. Sookie Stackhouse can read the thoughts of anyone who walks into her Bon Temps diner, with the exception of a mysterious, handsome vampire. Jason Bourne takes an ill-timed dip in the Mediterranean and emerges with a case of amnesia and a clean slate. We’re fascinated by the inner workings of our grey matter, despite (or maybe because of) the fact that we know so little about it.

We don’t know much, but scientists have suspicions. They think our willpower comes from the frontal lobes of our brain, thanks largely to a grievous head wound suffered by one Phineas P. Gage. They think our memories are organized more like networks than file cabinets, with signals bouncing between nodes the way a funny meme zigzags across the internet. Some more outré theorists even think consciousness can’t be explained by classical mechanics. Instead, they think consciousness arises from quantum processes occurring inside our brain’s neurons.

We have so many stories about the human mind, but most of these stories don’t make much use of scientific theory. With Countermind, I wanted to remedy this a bit. I wanted to write a thriller that does for psychology what Jurassic Park did for biology.

Of course, science can be boring, and theory alone doesn’t make for exciting fiction. Countermind doesn’t have any dinosaurs, but it does have psychics, and hackers, and spies, all caught up in a tense game of cat-and-mouse in a near-future, post-privacy Hong Kong where secrets are illegal, communications are monitored, and government telepaths can read your mind at will and without a warrant. And that’s before things get really weird.

I won’t give too much away, but I promise you won’t be bored. The state-sanctioned psychics reading your mind know I’m right. 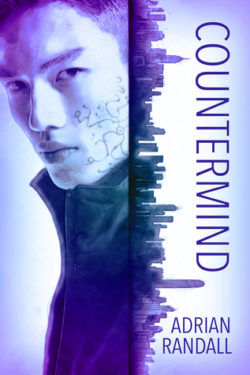 Alan Izaki is one such fugitive, as well as a hacker, grifter, and thief.
Countermind agent Jack Smith is hunting him through the twisted underbelly of Hong Kong.

It was past midnight, and some parts of Hong Kong actually did sleep at this hour. The pawnshop was near Kwai Chung, its customer base mostly local workers pawning valuables just to squander their money on the races, men who wouldn’t have the resources to track down the goods they’d put up as collateral. Alan had chosen the shop for its proximity to a body of water, and it was just a minute’s hard sprint to the nearest container yard, then through that to the channel.

He’d only gotten a brief glimpse of the attacker in the pawnshop, but that had been plenty. The man looked just a few years older than Alan, Eurasian, tall and lean, hale, clean-cut, clean-shaven. His attire had been dark but utterly nondescript. There was an impression of a black suit jacket, black slacks, and a black button-down shirt (but no tie, and open at the neck). Alan hadn’t the time for more lingering impressions, but the man would’ve been attractive under more civil circumstances.

The man wasn’t the shop owner, and was too well-dressed to be another crook or a triad member. That probably meant law enforcement, ample reason for Alan to make the quickest possible escape without sparing even a backward glance.

Alan vaulted from the sidewalk over a steel railing, dashed across the street, leapt another rail, and charged down a covered stairway, letting gravity lead his charge toward the water, angling toward the red lights atop the cargo-loading cranes just visible over a row of gently swaying palm trees. He hit the next street with such speed he lost some momentum to a brief stumble. A red-and-silver taxicab blared its horn at him, and Alan ducked under the canopy of a shuttered dim-sum shop to get his bearings. He glanced up at the building corners in the nearest intersection and spotted the closed-circuit cameras. He couldn’t see which way they pivoted in their housings, but didn’t think they’d have a clear look at him where he stood. Just to be safe, he’d have to circle around, keeping shy of major streets if he was to stay clear of any more traffic cams, though his pursuer couldn’t be far behind.

Or was it pursuers? The man had attacked Alan alone, not a standard practice for an officer of one of the world’s most famous police forces. If he was a government agent, he had to know what Alan was, right? And what such agent would be so reckless as to challenge a rogue telepath completely solo? Alan doubted even a state psychic would risk such a confrontation, and this man had given no sign of being a psychic himself, had not attempted any telepathic attacks, relying entirely on physical force. Who was he?

Whatever he was, if he caught Alan, it would mean death or worse. He had no need to know who this man was, only to escape him.

Alan pulled his jacket tight around him and popped the collar up. He turned a corner for a side street with fewer cameras and fewer lights and strolled a leisurely path into the shadow of an elevated highway, traffic rumbling above him. From there, he made his way through a hole in a chain-link fence he’d prepared earlier tonight with the help of his bolt cutters, slipping into the container yard, and then he sprinted across the yard toward freedom.

He ran straight into the agent.

The man stepped around the corner of a container and flashed Alan a razor smile as he kneed him in the stomach, allowing Alan’s own momentum to double him over. Then the man threw Alan into the side of the steel container with a clang that echoed inside his head as his arm was twisted behind his back. Alan was strong for his size, but the agent was using some sort of judo leverage shit. Alan tried to wrench free, nearly succeeded, and then the man compensated for his strength by spinning him into the side of another container.

The man tightened his hold and hissed into Alan’s ear.

“How many counts of resisting arrest?”

Alan gasped, gulped, and tried to talk his way out, forcing the words. “Come on, man. You never said you were arresting me.”

“I thought it was implied. You did flee.”

“After you shot me!”

The agent tripped Alan roughly to the ground and buried his knees in Alan’s back. His hand forced Alan’s face against the concrete, and Alan wheezed as the air was squeezed out of his lungs.

Alan screwed his eyes to the edges of their sockets, trying to see up through the corner of his eye. The light of a passing ship winked between the container towers and slid over the man’s features: dark eyed, dark haired, darkly smiling.

“Resist some more,” the agent said. “I don’t need to excuse brutality, but it helps with the paperwork.”

Alan realized—a bit belatedly and with scant sense of relief—that he was now very much in danger of physical harm.

He expanded his thoughts outward and upward, seeking out the luminescent glow of his assailant’s mind as if reaching for a firefly in the night. He found it, wrapped telepathic fingers around it, and squeezed tight.

There you are, Alan thought at him.

Fleeting impressions of the man’s surface cognitions filtered through the permeable membrane of Alan’s consciousness: mild surprise, then recognition, and then a strange kind of resigned satisfaction.

“And there you are,” the man whispered.

Alan Izaki is one such fugitive, as well as a hacker, grifter, and thief.

Countermind agent Jack Smith is hunting him through the twisted underbelly of Hong Kong.

Adrian Randall is a PhD and a dual-class bureaucrat/scientist. A native Floridian, he lives in Alexandria with the love of his life and their many beautiful board games. He has a tenuous grasp on reality, owing to a steady diet of novels, comics, and other distractions. All his ideas start as character backstory for MMOs and RPGs, and he does all his writing while listening to video game soundtracks. So if he’s gaming instead of working on a book, it’s not procrastination, it’s workshopping. He usually spends his free time geeking out about some damn thing or another. You can geek out with him through any of his social media channels. If he doesn’t respond, it means he broke his phone again.

I spent several years back and forth living in Hong Kong, I loved it, and this sounds very intriguing. The excerpt helped, but is there a review coming?

I promise there is a review coming, Matt. Paul is writing one but he’s a bit under the weather right now. Hong Kong is definitely vibrant and full of life and people, I can understand why you enjoyed it so much 🙂