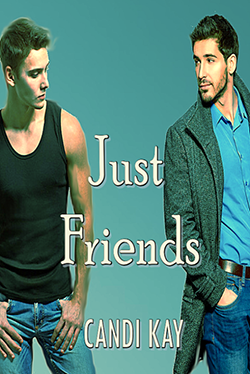 Justin and Trent have been best friends for over twenty years. From first loves to first times, they’ve shared everything. Well, maybe not everything, though it’s not from lack of trying on Justin’s part. He’s wanted to get into Trent’s pants since they were in high school but his friend is either oblivious or simply not interested. Both twenty-five, they’re as different as night and day. Justin likes to party and have a good time while Trent is more settled and serious.

They’re secretly head over heels in love with each other.

After seeing Justin with one guy too many, Trent has finally had enough. He pulls a silly prank on his best friend. Sure, it’s childish, but he can’t keep watching the man he loves hook up with random strangers. What happens after can make or break everything. Will it finally push the two together or will their long friendship be over?

Justin and Trent have been friends for twenty years, they grew up next door to one another and came out at fifteen to their respective parents. Trent has always been tall and easy going and fit in at school. Now he has a good job, including lots of promotions.

Justin was bullied at school for being gay and even though he’s got a business degree he sells suits for a living, preferring to put his energy into partying, clubbing, drinking and hooking up with lots of guys. If he had a hard time at school, then now is his time to party.

Trent is sick of bailing Justin out after he’s drunk and been with yet another guy… or two. He’s in love with Justin and he wants to be more than just friends. He’s at the point where he’s over thinking a life with Justin is ever going to be possible.

“I’m tired of being the one who takes the middle of the night calls when you’ve done the walk of shame. Or when you’re falling down drunk in an unfamiliar part of town, with no clue how to get back to your apartment. You call me boring. Well, guess what? Mr. Boring now officially says fuck you.”

Just friends is nice, easy reading, no drama or angst, but I could have knocked some heads together

on an occasion. Still, the sex is hot, including a scene where Justin finds himself in the middle of a man sandwich at a club. Oh yeah. That was awesome. I do like the occasional friends to lovers story and I enjoyed the time I spent with this pair. I’m also glad they got their acts together and saw what was right in front of their noses.

They say that in order to be good lovers you need to be friends first. Didn’t we have that covered already? So, what went wrong?

Can some prank green and glowing lube and bossy mothers help get two guys together who should be more than just friends? If you like friends to lovers and sexy ‘n sweet contemporary romance, some humour, and a HEA, then this is a cute story that fits that brief perfectly. 3.75 Stars!

I LOVE that last GIF. That makes Justin’s glow-in-the-dark lube that much more interesting. 😉 Thanks for the awesome review, Kazza!

For the love of all that is sacred I’m grabbing things below! I’ve got a copy of this little muther to read and I’m a bit iffy about nads and the glowing lube. lol