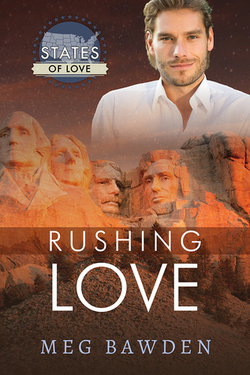 This review could be considered spoilerish and one of the visuals is NSFW.

After a devastating breakup with the man he thought he’d spend his life with, Flynn Webb takes a vacation to a South Dakota dude ranch. It’s something completely different from anything he’s done before, and it helps that it’s as far away from his ex as possible. Trapped in his own depressive thoughts, Flynn is surprised to meet Grayson Harland. Not only is Grayson a sexy cowboy—one fifteen years younger—but he’s the most charming man Flynn has ever met.

The title is fitting for this book. There’s rushing love and there’s rushing love like Grayson and Flynn did. If you go to read this make sure you leave reality at the door because this is about as unrealistic as you’ll find in a contemporary gay romance.

Flynn is thirty-six. He’s still dealing with the breakup of his nineteen year relationship with Brendan Rogers. Brendan dumped Flynn for a guy ten years younger and that stung for the old guy that is Flynn.

No, thirty-six is not old but to read this story you’d believe the author was talking about somebody several decades older.

Flynn decides to take a trip from his home in New York to a dude ranch in South Dakota. Sean, Flynn’s best friend, tags along. I kinda liked Sean. He’s straight but not bothered in the least by being hit on by guys. He was quite annoying a few times but he did add a little comic relief.

The morning after their arrival one of the ‘cowboys’ from the ranch shows up early to pick Flynn and Sean up for their first horseback riding lesson.

Have you ever seen somebody and in that split second felt like you’d been slammed with lust, love, and all the other gushy stuff romance writers write about? That’s the only way to describe how it was when Flynn opened the door for the cowboy, Grayson. There’s instant love and lust and then there’s what these two guys experienced. Think little hearts floating around their heads.

Grayson openly flirts with Flynn, which really should flatter the old guy. Grayson, Flynn learns later, is a young’un at twenty-one. But Gray doesn’t just flirt with Flynn, he openly throws out somewhat crude sexual remarks – again, literally seconds after they meet. No biggie. Those remarks are nothing compared to what he says on the bus ride with other tourists a little while later. Had those particular comments been made to a woman she’d immediately scream sexual harassment and with good reason. I guess it’s okay because Flynn is a guy? That’s sarcasm, obviously.

Over the period of under two days Grayson and Flynn have a ‘thing’. But of course things don’t go smoothly for the new lovebirds. There’s an issue with JJ, Gray’s older brother. JJ is a jerk. He’s openly rude and obnoxious to Flynn – you know, a paying customer – and it took me back to a book that I read a few years ago. In that one, like Rushing Love, a man completely out of his element took a vacation to a dude ranch only to be treated badly by the owner of the dude ranch. That one had zero redeemable characters where this one at least had Sean and a couple of secondary characters.

It turned out (I found out much later) that JJ kinda had a point. He shouldn’t have treated Flynn the way he did. There was no excuse for that at all. However, he had reason to be concerned about his baby brother falling hook, line, and sinker for a guy he literally just met. Apparently Grayson is keeping a big secret from Flynn and that secret plays a big part in why JJ is being such a jerk.

Two days after the first meeting – or was it the day after? – Flynn and Grayson are head over heels in love. Flynn agrees to walk away from everything he knows for this total stranger who he’s not even had sex with yet. He agrees to this even after his best friend tells him to ask Grayson what his secret is. Sean knows it but feels Grayson should be the one telling, not him. But Flynn doesn’t believe a silly secret or dishonesty between him and his brand new soulmate should matter. He’s determined to give up all he knows for this much younger man who has turned his world upside down.

They do eventually have sex, by the way.

Throw in some ‘out there’ drama with Flynn’s ex and there’s your story.

Everybody is beautiful. Flynn is hot. Grayson is so hot that women answer the doors of their cabins wearing just their flimsy pajamas in hopes of seducing the sexy – and did I say hot? – Grayson. Hell, even the grumpy JJ and a doctor are hot.

I know I’m being harsh here. I’m not a fan of writing bad reviews. I was willing to suspend belief with the love-at-first-sight thing. I let the somewhat cheesy and dated dialogue and back and forth between Grayson and Flynn go. I let the jerkiness of JJ go. Hell, I even let the “Oh my God, I’m SO old at 36!” go. But then I got to the Brendan part and everything that happened in that particular chapter and that absolutely killed it. There’s suspending belief and there’s being slapped in the face with the silliness of what Brendan did. It was beyond juvenile and needy. It was embarrassing to read. Flynn’s reaction to it was not in line with the shy and somewhat prudish character that had been described up to that point. It should also be noted that the author does – in the final chapter – take the story forward a little over a year so the reader can see where the guys are then.

I love books that have characters with substantial age differences. I actually seek those books out more often than not. Sean and the age difference between Flynn and Grayson were the only pluses for me in Rushing Love. Others may love it. It just didn’t work for me.

An ARC of this book was provided by Dreamspinner Press in exchange for a fair and honest review.

I have to start with how much I love those GIS, they are so good. The 2 guys and the quote are bloody hot and the others are pretty. Your review is fantastic, I have a pet peeve about anyone in their 30’s thinking they’re old. Gees, if I could go back in time to any age I’d go back to my thirties – it’s your prime. Insta-love I’m good with, but when you add it to other things, including jerk comments, age inappropriate behaviour and harassment, it becomes too much. Love the review, Cindi. You have to call them… Read more »

Thanks, Kazza. I had fun with the GIFs. 🙂

Thanks about my review. I don’t know if I’d go back to my thirties but I definitely don’t remember 36 being old. If that was old, what am I now? *snort* I’m okay with insta-love in some cases but it has to be written realistically. This wasn’t to me. I believe the inappropriate comments were meant to be sexy. I didn’t see them as sexy in any way.

You know I’m not a fan of writing bad reviews but I do have to call them as I see them.