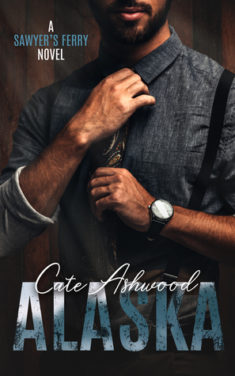 Nobody says no to a Prescott.

Not even one of their own.

Holden:
Living up to expectations had never been easy, but when I went after something, I got it. Success. Money. Victory. I was standing on the doorstep to having it all. There was only one thing standing in my way.

Gage:
Power and prosperity are overrated. Especially when they come at a price. When enough became enough, I walked away. Nothing had ever tempted me to look back, until one day the past showed up in my backyard.

I’m not so sure I can walk away a second time.

And I need you more than want you, and I want you for all time…

These beautiful Jimmy Webb lyrics fit the backdrop for the relationship in this book, the passion, push-pull, and, ultimately, the absolute love that developed between the MCs, Holden and Gage. Jimmy Webb has always written poetic lyrics and songs about everyday people doing everyday things. These words seemed really apt for the development and intensity of the emotion and connection between Holden and Gage in Alaska. It kept playing over and over as my personal soundtrack while I read.

Two years ago Dr Gage Emerson left behind his high powered medical research work in NYC. Since then he’s worked in a small hospital in the equally small town of Sawyer’s Ferry, Alaska. His daily life is work, keeping to himself, with occasional trips to the local bar. That’s it. That’s him. One night his best friend Logan points out that there’s a new guy at Whisky J’s checking Gage out. The guy is ‘pretty’, younger, but there’s something else. Something about him that seems familiar and puts Gage off kilter. He soon finds out why.

Holden Prescott has been sent to Sawyer’s Ferry by a singular demand of his father, to bring Gage Emerson back to Westbridge, Philip Prescott’s private research and medical facility. Prescott is a cold, calculating man and father. Everything is seen as a means toward an end, and the end always justifies the means if it equates to more money. He may have made sure Holden went to the best schools, including medical school, but he holds everything over him like Damocles Sword. Holden has tried to appease and please his father but to no avail.

No matter what I did, my successes seemed to push his expectations of me higher. Everything I’d ever accomplished, he’d done it first and he’d done it better. I needed to work harder and be more dedicated if I ever wanted to step out from his shadow.

A one way ticket to Alaska is given to Holden by Frankie, Philip’s assistant, and he’ll only get a return ticket back to work, to his trust fund, to his apartment, if he brings Gage Emerson with him. It’s mission impossible because Prescott senior has pushed for the past two years and Gage has never wavered in his answer of ‘no’.

Philip Prescott’s bastardry and greed may have been the catalyst for Gage to move on, but Sawyer’s Ferry has become Gage’s home. Logan Baker, his fellow surgical colleague and best friend of twenty years, may have been the reason he went to Sawyer’s Ferry initially, but now he has no intentions of going back to Manhattan. He stays because it’s grown on him, it suits him. He makes a difference in people’s lives being a surgeon at the Sawyer’s Ferry Regional Hospital. He likes his own company more than other people’s.

So, suddenly, two men who ordinarily wouldn’t be in contact and shouldn’t be interested in one another, but have a mutual story of the difficulties of Philip Prescott, are thrown together

then drawn together. Gage is a bigger man, somewhat hirsute and, right from first sight, Holden thinks of him as a hot lumberjack who could give him some intense and rough sex – just his type. Gage sees Holden as the pain in the arse son of his pain in the arse one time work partner – but there is attraction. Holden is gorgeous… if only he wasn’t a Prescott. However, Holden actively pursues Gage and they’re both attracted, so maybe if they have sex that’s a mutual itch scratched. No harm, right? Yeah, not going to happen like that. Once they have sex, Gage cannot get Holden out of his mind. His hormonal lust comes roaring to the surface. Holden’s exactly the way Gage likes his partners – a little more submissive and a lot demonstratively passionate.

Long story short, they end up needing another surgeon at SFRH and Holden becomes it. But it’s only temporary, three months maximum. He also ends up living at Gage’s house. Why not? They’ve had sex, it’s spectacularly good, they get along, and it won’t be for long. You know where this is going but the writing, the characters, the delivery are all what make the book so very good. There is no drama, as such, just a low level push-pull between the MCs, and certain things in the background ramp up the need and the uncertainty. It’s hot, it’s very hot, and there is emotion involved. The clock is ticking down on Holden leaving and going back to New York. Gage doesn’t want to make someone stay in a small town when they have a potentially glowing career and future ahead of them, even if he does love that someone. Holden is torn about the man he is coming to love but is unsure if Gage loves him in return, and his father and his career are certainly there in the background.

The book is written in alternating POV so you know how each man is feeling. How much they are falling. How much they don’t speak of it because it’s hard to be vulnerable. Saying I love you to someone you have privately signed your heart over to is a huge point of vulnerability, especially when you aren’t sure of the reciprocity of those feelings. I felt every minute of that clock right along with the MCs.

It wasn’t until I was standing there, that torn envelope in one hand, that I realized how hard I was falling for Gage. It was in that moment, the moment I felt the happiest at the prospect of staying, that I grasped just how crushed I was going to be when it came time to leave.

The MCs may have been thrust together, they may have jumped into bed and lust quickly, but when it comes to the building of the depth of feelings between them on an everyday basis, this book works. Logically, they 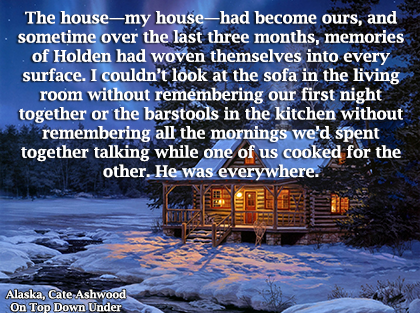 tell themselves this is too soon to be anything more than initial attraction and great sex. However, a shared respect of their work skills, what they each bring to the relationship – because they are different people – and a growing understanding of who the other person is at their core all helps them want and need each other more and more. Holden is younger, a great surgeon, and the people of the town and staff at SFRH take to him more quickly than they did to Gage. Holden may be a Prescott, but he is not his father. In fact, Philip has done a number on Holden, something Gage realises they have in common, the only difference being that Holden has borne the brunt of Prescott senior’s arrogance and distinct lack of empathy by simply being his son. Gage and Logan give praise where praise is due and help Holden see he is so much more than he’s believed he is. Watching Holden gain his independence was a good thing. Gage finding someone when he never thought a relationship was something he needed, or would have, helped melt my heart.

…but I’d never cared this much about someone else before. I’d never needed to both hold on and let go so desperately, and I couldn’t wrap my head around what the right thing to do was.

In a lesser author’s hands it would have been easy for this romance to seem too quick, too convenient, too much about the sex and not about any real relationship, but it isn’t like that at any

stage. I believed in everything Holden and Gage built together. The timeframe for their romance and realisations about one another were perfect. That epilogue was perfect. They were perfect. I finished this book thinking, yeah, if ever there are two guys meant for one another, who are in it for the long haul, it’s Holden and Gage. I was completely involved in the men and their story – in Sawyer’s Ferry – from the outset. I have read a number of Cate Ashwood’s books and she has this knack of  building great characters and romance within a community that has a life of its own, just like Sawyer’s Ferry and its hospital. For me, this is her best book to date. It’s gorgeous. The narrative, the dialogue, is tight, the intensity, the passion and emotion are there without unnecessary drama, and the characters are memorable – that includes secondary characters like Logan and Frankie. I can’t wait for book #2 in this series. 5 Stars!

First, those visuals. The first one for obvious reasons. 😉 The other two are simply beautiful.

This looks like a great book. You know an author’s good when they can bring characters together the way you describe in your review and still make the love story work perfectly.

(I swear I commented on this days ago.)

It’s happened to me where I thought I’d commented too. Gremlins on the line 🙂

Thanks, Cindi. I loved this book. I hope a lot of people who enjoy a contemporary romance go grab it and have a read.