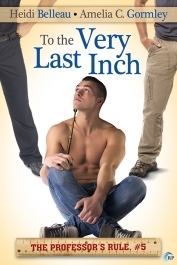 Just days after their scorching reunion, Professor Evander Carson has kicked his one-time pupil James Sheridan to the curb—and tried to sabotage James’s new relationship with Satish Malhotra. Something isn’t right here, but James isn’t sure he should bother trying to figure out what. Carson isn’t good for him and will never change. He needs to accept that and move on. Satish knows something is up, too, but he thinks the relationship between Carson and James is worth saving. To do the right thing, Satish will have to make James and Carson confront the secrets they’ve hidden for years and help them to overcome the pain and mistrust they’ve caused. But if Satish succeeds, where will that leave him and his intensifying romance with James? Will the three of them be able to find the right balance, or will James be forced to choose between the pain and submission he craves with Carson, and the sweet, vanilla stability he’s found with Satish?

The blurb gives you much of what this novella is about. What it can’t give you is a really good understanding of the dynamic, and the honest passion that exists between three interesting and relatively diverse characters. It is a different relationship – the three men do not enter into a ménage, rather they orbit around James. I was worried about this. For a while I thought I may be unhappy with the way this book was heading. The lack of communication did frustrate me at one point but thanks to Satish, things were quickly over a hump and on track. The development also didn’t feel contrived, it felt organic and pertinent, so that helped. The story is primarily told in the present with the aid of necessary flashbacks – four years earlier (when things began for James and Carson),  two years earlier (when things initially broke down for them) and pieces the issues together of why/how simple misunderstandings, miscommunications, can blow things wide open. What one person thinks is noble and right the other sees as uncaring and cold…unless everyone knows the deal –

What the fuck had happened back there at Carson’s place? Carson hadn’t seemed defensive or anything James had expected. He’d seemed resigned and relieved, but also…defeated? Why? James was no longer on the same page as Carson. He’d missed whole chapters. Hell, he wasn’t sure he was even in the same book anymore.

Professor Carson may have thought he knew what was best for James, but without proper discussion he was simply being presumptuous. James’ old triggers make Professor Carson’s ideas seem like he was reliving his addictions all over again. The series, although told in short novellas, progresses the characters every time. James goes from uncertain student, and someone who once had a dark place, to someone I thought was a disarming guy worthy of two good men.

Thankfully Satish knows a thing or two about reverse psychology and math, because he problem solves, adds 1 + 2 correctly… and helps create something with the aid of Professor Carson that is mutually beneficial for all. I liked the fact that in the last two instalments Satish was open to understanding that not all relationships are clear-cut. There was growth for everyone and it ended on such a high note.

Overall:   The last instalment in The Professor’s Rules series is a fitting end. While simple on the surface, the writing is quite layered and makes salient  points…and it’s sexy as fuck. I liked all three main characters, but I have always had a ‘thing’ for Professor Carson, he’s my guy. I

was happy for his (connected) thoughts, his motivation, his voice and his warmth in this last book. I was happy with the right ending for the right relationship that was deftly developed throughout.  I highly recommend the series. If you haven’t read them start at book #1 and work your way through – if you can do it in one sitting, bonus!

“Stop me?” James said with a laugh as Satish writhed underneath him. “You? My dear Professor Pervert, in all these years, you’ve been nothing if not the man goading me on.”

“I prefer to call that ‘helping you move forward,'” Carson corrected archly, but he smiled.

ARC provided by Riptide Publishing in return for an honest review.

After reading this, I know I need to bump this up on my TBR. I love the idea of the three characters and I can tell that I would also have a ‘thing’ for Professor Carson. I would love to be able to read the entire series in one day. It looks like the series ended well.

Thanks, Cindi. Yes, Professor Carson was my main man..

So ready to read this series! aahickmanathotmaildotcom

I have to read this series. 😀

I’m looking forward to this so much 🙂