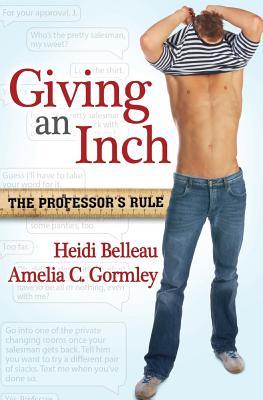 The 45 page short is given a fairly decent description in the official blurb. James is looking for clothing to wear for an interview as part of his PhD. He’s kind of a nerdy history major, and his sister was going with him to help make fashion decisions, until she fell ill. Now it’s up to James and his sister, via text and photos, to kit him out for the interview. The thing is, it isn’t James’ sister that he texts, it’s his old Professor, and Dominant, Professor Carson. Professor Carson is all seeing and all knowing and he reads James like a well known book, anticipating what it is James likes. What James likes is the menswear worker, Satish, who James thinks might just be flirting with him  – occasionally leaving his hand on him a bit longer, touching the small of his back – nothing he could say for sure, but he’s fairly certain. Even though it’s via texts they are communicating through, Professor Carson just knows James after their time in a BDSM relationship two years prior. James still likes Professor Carson, he still has his number in his phone. He still takes orders. No one since has rattled James’ kink-cage like the Professor.

The good Professor knows that James likes exhibitionism and he likes the pressure being taken off him,  being guided into situations that he feels somewhat wanton in. He knows how to push the right buttons and convince James to pluck up courage, to take pictures of himself in the dressing room on all fours spread out with fingers up his own arse and facing a mirror. He convinces him to seduce Satish into the dressing room and to blow him there –

He let Satish know how much he loved it, how hungry he was for it. Staring up in pure cock-sucking adoration, James drove himself all the way down, until his lips were wrapped around the base of Satish’s cock, until his breath warmed the dark thatch of hair there. Satish made another strangled sound and his eyes clenched shut. Something surged  underneath the skin pressed against James’s stretched-taut lower lip, and he drew back just in time to let that initial burst erupt across his tongue. Totally shameless, James jerked himself and watched Satish’s face as jet after jet of warm, salty cum coated his extended tongue.

Given that this book is short, it was incredibly well put together, I felt like I knew quite a bit about James, which you would expect, but also Satish, who isn’t on page with huge amounts of dialogue,  yet his personality came through just fine. I want to know whether he will be in the next book and if so, in what capacity? A third? Will Professor Carson want to watch? Join in? – Lawd, I hope so to both!. And speaking of which, Professor Carson is the right mix of sure-of-himself, flexible, threatening, sexually powerful and coercive, in all the right or wrong ways. James also has a bratty epiphany by the end of this short. Sooo….I would like more please. Highly recommended for those who like a sexy read, the concept of power exchanges, BDSM., with the desire for bigger and better to come…..meant in oh so many ways.