Every Inch of the Way (The Professor’s Rule #4), Heidi Belleau and Amelia C Gormley 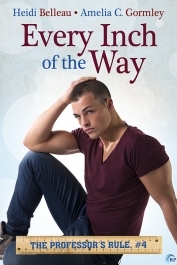 Satish Malhotra is in over his head. What appeared to be the hookup of his dreams turned out to be another man’s kinky sex game, and thus ended his relationship with sweet, submissive James Sheridan before it’d hardly begun.

Or so he thought. Being used in someone else’s domination/submission play should have been a deal breaker, yet James—bruises, boyfriend, and all—is too compelling to let walk away. But James has needs Satish isn’t sure he can fulfill, and it seems his mysterious Professor isn’t willing to share.

Can Satish keep James happy in bed and in life, or will James be forced to choose between his dominant and his burgeoning vanilla romance with Satish?

Book #4 takes up  where book #3, Inch by Inch, leaves off –  James has come clean about the reasons behind the blowjob in the dressing room. There is a third party involved.  The thing is, James likes Satish, but Satish does not want to be a part of some game that James is involved in, and now Satish is caught up in it too. He does not want to see James at the moment. He needs space. He doesn’t want to share a bruised and marked James with someone else – James is at the higher end of masochism and by that very fact he is marked up quite a lot.  Nope. Satish is not keen on James’…whatever (Professor Carson) calling the shots in his love life by way of James. He also doesn’t understand the need for James to have this done to him.

How the hell had he gone from having “a dream boy fulfilling his every forbidden fantasy” to “stomach ulcers” in the space of a day?

But no matter Satish’s feelings, and he can’t stop thinking about James in a hodge-podge

of emotions from sexy to angry, he has to face James. He is due to come in and collect his tailoring and Satish will have to be professional. But how does he do that feeling as he does? That is taken out of his hands, because it isn’t James that turns up, it’s his whatever. Professor Carson-

Wow. He was older. Like, a lot older. James hadn’t mentioned that.

“If you wait I’ll go grab your son’s tailoring.”

“I’m Professor Evander Carson,” the man said so calmly that Satish might have almost imagined that instant of irritation. He introduced himself as if Satish was supposed to know what that meant.

“Oh?” he replied, and felt an evil little smile tugging at his lips. “James didn’t tell me his father was a professor.”

Professor Carson (it appears) doesn’t like the fact that this is different for James – he likes this guy, Satish. It isn’t just a game between the past lovers and D/s pair. Carson basically warns-off Satish, which makes Satish want to be with James – this whatever of James,  this guy, can’t dictate his relationships and his feelings, so he contacts James and organises a get together. Pretty soon, James and Satish work out some terms and arrangements of their own, Satish definitely can’t do the BDSM ‘thing’ that James needs so much. He can, however, provide him with a sweetness and a different kind of affection to that of Evander Carson. The other revelation is that Satish, who initially didn’t like the markings, now finds the crisscross markings and bruises very sexy. He doesn’t want to inflict them, but he sure as hell likes to look at them and touch them when they have sex.

“You go through all this pain, and it looks awful, but then on the other side, out comes this guy who’s happy and gorgeous and comfortable in his own skin. Which not a lot of people are.”

That James is happy with Satish’s side of companionship and their sex is evident. But still, it isn’t that easy. Carson seems to be protective of James. And now, once James finds

out that Carson has warned-off Satish, he is not a happy camper. Where Inch by Inch ended in conflict between James and Satish, this time Every Inch of the Way ends in conflict between James and Carson. Where will it go from here? Satish seems to have come full circle. There are hurts that two people are hiding from the other. Is Carson prepared to do deal with them? Is he still playing this to the hilt? Is he thinking about James, and James doesn’t appreciate that the ‘game’ is for him this time? Or is Professor Carson the ultimate narcissistic manipulator?

This is a very written series. It is sexy, intelligent, funny, and both authors work well together. I have enjoyed every short in the series so far, Every Inch of the Way is no different. I like the main characters. Professor Carson is still  enigmatic, and it is written very much that way. I am sure book #5, To the Very Last Inch, will show us a lot more of Professor Carson and his “reverse psychology” – no matter which way it develops. It is interesting, because no matter who James is with I like them – Carson, Satish, they are very different and I enjoy their unique voice. And I do like James. However, I am really hoping that this doesn’t turn into an everyone-loves-James-and-must-make him-happy fest. Onto The Very Last Inch.

Copy supplied by Riptide Publishing in return for an honest review.

Great review and quotes. I’ve had this series on my TBR for awhile. I’ll have to bump it up.

It is a very good little series.