The Truth About Riley, Henrietta Clarke 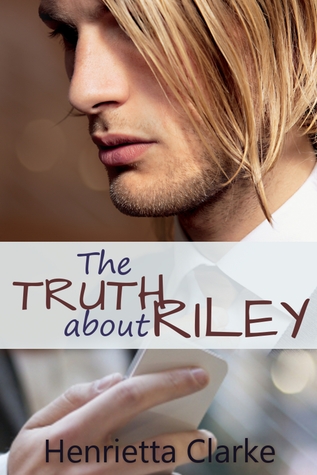 This review contains spoilers. Keep that in mind before reading.

Riley Aylworth is a part-time writer and part-time translator of LGBT books. Bilingual, he translates them from English to Italian. Once a player with a different man anytime he wanted, he now can’t even get one to have coffee with him. Riley was burned three years prior in Milan and half of his face was badly scarred as a result. The only sex he’s had since has been with his hand. When he goes out in public, he gets stares and the occasional scream from a child.  He has never had any type of relationship, having been content before he was burned with one-night-stands. That changed drastically after his accident. Only no one wants the new Riley, not even for a quick fuck.

Cameron (Cam) Kirkwood is an advertising executive. Married to his work, he is not long from a difficult breakup with his partner of four years, Chris. Too many late nights, a missed anniversary, a trip for Chris to the Emergency Room as a result of an accident caused by Cam, and enough was enough for the other man. Chris was done.

Riley spends a lot of time in a coffee shop working. One day he grabs a piece of paper off the floor with the assumption that he had dropped it.  A closer look later and Riley discovers the piece of paper is actually an advertisement for a phone sex service, torn from a magazine.  Lonely, and more than a little desperate, he dials the number. Only the person who answers the phone is most definitely not a phone sex operator. It is Cam and he’s pissed. In anger after the breakup, Chris placed the ad listing Cameron’s phone number. Riley is the 40th call Cameron receives in two days and he has had enough. He yells at the unsuspecting man and hangs up. He’s shocked when Riley turns around and calls and yells right back. A phone relationship starts from there and over time they become friends and later, more. 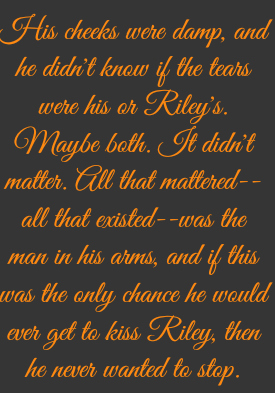 This story has a great premise. I love the idea of two strangers coming together over a wrong number. I love the damaged hero and the beautiful man who falls in love with him. Only the ‘beautiful man’ is totally unaware  of the scars on Riley’s face. He is also completely unaware of Riley’s last name, where he lives, or anything else personal. For months.

Then there is the man in the coffee shop. The man who has scars on his face, who Cameron can’t stop thinking about after he sees him the first time. Sure, the scars took him by surprise, but afterward, he couldn’t stop thinking about the man’s smile. Of course the man is Riley, who is also unaware that the beautiful man who keeps smiling at him is the same man he’s speaking with on the phone at the exact same time their eyes meet. I liked that part of it as well. It was sweet. Riley and Cameron are seeing each other at odd times but yet neither will approach the other because of the relationship they have with their phone boyfriend. It obviously comes out later (much, much later) but it takes a long time (seriously, a long time) for it to happen.

There are a lot of things I loved about this book. I love (as mentioned above) the strangers meeting over a mistaken phone call. I adored Cameron instantly, even knowing the story behind his last breakup. I loved Riley – to an extent. Riley is damaged physically and this made me feel sympathy for his character and the sadness he felt over feeling that if Cameron ever saw his face that he would stop caring about him. I love Riley’s quirky Italian mother, who is introduced as an important secondary character. I love how Cameron was willing to wait as long as necessary for Riley to come around and to allow him to meet him away from the telephone. It was like You’ve Got Mail and Beauty and the Beast rolled into one.

But then there are things I seriously did not love and that’s a shame because this had the makings of being an outstanding story.

– It was entirely too long and the back and forth got tiring.

– As much sympathy as I had for Riley initially, I lost that the more his woe-is-me spiel continued. While I could definitely understand his fear of losing Cam if the other man saw his face, he was extremely selfish by not telling Cam why and by not even giving him his last name. It was okay in the beginning but as the book went on and on it stopped being so.

– How did Riley get burned? It happened in Milan. That’s the only thing said about it throughout the entire book. The entire story is based on Riley’s insecurities over his scars, but yet how he got scarred is never explained.

– The two men are not even knowingly in the same room with each other until 82% of the book. Yes, they saw each other across the coffee shop quite a bit, but as a couple? Not until 82%. While I found the way that meeting happened to be more than a little sweet, and even quite beautiful, I have an issue with it taking so long for it to happen. And even then, while they were together they really weren’t. Immediately after that particular scene, Riley goes right back to being insecure and is not willing to give, even a little bit, for a long time.  I ended that part of the story thinking ‘here we go again’. It was frustrating.

– There is a lot of redundancy throughout this book. It’s extremely detail-heavy but yet not enough details are added when I felt they were necessary.

– My biggest problem of this book is the ending and the fact that the story ended at 96% on my Kindle, with the last 4% being blurbs of the author’s upcoming books. I would have been okay with the book ending there had it not been so abrupt. I was hoping for more in that last bit of the book.

– One of my biggest pet peeves is reading a book that is part of a series but not labeled as such. I understand when authors decide later to revisit characters and add another book, but it is obvious by the actual ending, and comments by the author afterward, that this was written initially with the intent of it being first in a series.  I felt cheated after reading so many pages to get to that point only for it to end at a critical moment without warning. Yes, they finally got to see each other for the very first time, but then what???? I wanted resolution and the fact that I read so many pages expecting it, and then not getting it, did not work for me. 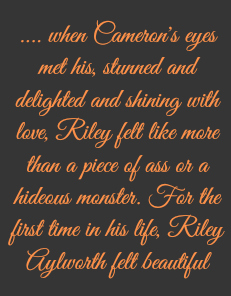 Overall, I did enjoy the story, but it just went on too long. With each chapter I kept hoping that Riley would give a little with Cameron and give him some of information of who he was. Cameron and Riley are literally only together two times in this book. The two times they are together is beautiful, but it simply wasn’t enough for me. 318 pages of phone calls, a few emails (to Riley’s pen name email account, of course) and a couple of sexy photos sent back and forth. There is eventual phone sex as well but that didn’t work for me considering the length of the book. I wanted more of them together, as in together, than just the two times they were.  I am curious to see what happens after the two men look into each other’s eyes the first time, but I don’t think I would be willing to read another book of this length to see where they go from here.

I do love the cover. The cover model looks exactly the way I could picture Riley in my head.

Previous post
The Dangerous Seduction, A.N Bond
Next post
Every Inch of the Way (The Professor’s Rule #4), Heidi Belleau and Amelia C Gormley

I LOVE that cover.

I have to say that the premise sounds wonderful and it would make me pick it up, but I could not read that back and forth and the inner monologue that would have accompanied it. Oh, just…no! on it not being clear that it will be part of a series. Great review, Cindi.

Thanks! If there were more moments in the book like the two times they were actually together, it would have easily gotten 5 stars from me. Both were written beautifully. The rushed ending, and my not knowing it was part of a series, really bothered me. I would love to see these guys again, but not in a 300-plus page book.

The cover is gorgeous. Definitely one of my new faves.