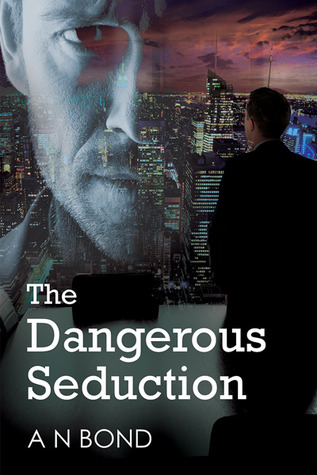 “In my experience, everybody’s got something to hide….”

Ryan Paullson, is thirty two, he’s originally from Texas. He’s been with Daisy for six years, they’re engaged and they live together in a small apartment in Brooklyn. Originally a  theatre major, he found work was sporadic and as an actor he makes a much better lawyer. It’s also a better way for him to make good money, to become upwardly mobile. After one application he lands himself an interview with the hottest law firm in Manhattan. His friend, Tim, has been submitting his resume since graduating to get in, with no results. But after a somewhat  unusual interview with the man himself, Joseph Van Aardt, Ryan is offered a job. He wants to become a respected, well off, powerful lawyer, and Chase Mackey Van Aardt is the firm for all this ambition. He also wants to work on the current big case the firm has – nailing Jack McNeill. The government hasn’t been able to prosecute him but Ryan believes in Joseph Van Aardt’s passionate words about getting McNeill and helping the people who have lost money and their livelihoods. Soon enough, he’s asked onto the team involved in the McNeill case. But before that, he gets the immediate attention of Joseph Van Aardt. It doesn’t take long for Joseph to pull out all stops to let Ryan know he wants him, he doesn’t care that Ryan is engaged…to a woman, he doesn’t care that Ryan works for the firm, and it could end tits-up in a sexual harassment suit,  and he doesn’t care what people think. Because Ryan very quickly gets on the team for the McNeill case, goes to an awards ceremony and meals with Van Aardt, it doesn’t take long for office gossip to start about the two being lovers. That Ryan is fucking his way to the top.

Ryan is working long hours and putting in a lot of time on all things work. He 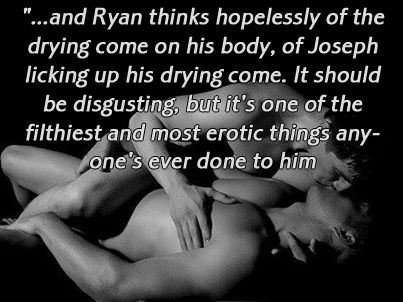 finds himself going home later and later, not caring. He is more and more drawn to the flirtatious, sexy, self assured, but highly enigmatic Van Aardt. On a business trip to Huston the tension and temptation gets to be too much and Ryan submits to the sway that Van Aardt has over him and they fall into bed together. He feels guilt over what he has done but never enough to stop the affair with his boss. He is totally and utterly obsessed with the charismatic and aloof Joseph. They are in the affair for months and Van Aardt even organises an apartment in an Upper East Side location for Daisy and Ryan – he knows Daisy wants to live there. It also means that Ryan is now living right near Van Aardt and he can drop in on his morning jogs so they can fuck.

Ryan is well drawn as a man who is decent at heart but who also desperately wants to be someone, is prepared to work for it but, even more than that, allows himself to be seduced into burying his principals for it. Someone who is totally infatuated with his boss and who now does things he would never have done before as the good Texan boy. Someone who is in denial over his sexual orientation and his greater desire for the hard lines of men than the soft curves of a woman. He does not like being painted as Van Aart’s lover at work and he does not want to be seen as gay anywhere else in his life. In this career he wants to be accepted, the theatre was full of rejection, but being picked and desired by Joseph, well, it’s very heady.

Joseph Van Aardt is an enigma. You get the sexual side of him, his clever mind, and the distinct feeling that he would sell his grandmother for the right price. He is at the top of the heap at thirty four, and he likes it. Ambitious and driven don’t even begin to describe the man. Being on the outside looking in you can see that he gets what he wants, he manipulates, he answers Ryan’s questions with questions or deftly moves onto something else

“We should to it again,” Joseph says, taking a chug of his wine.

“Is this what this is, then? A Date?” Joseph raises an eyebrow, he looks amused.

In bed, he is passionate and intense, but otherwise, he is mostly shut-down. You can see why Ryan wants him but, as the reader,  you never know whether to trust Van Aardt. However, one thing is certain, he is sexy as sin –

Joseph sucks him with the same expertise and single-

Joseph draws off him and exhales. “Christ, you got a nice dick. You taste so fucking good, Ryan.”

Apart from the passion between the two men there is a court case being mounted, and during the case two people die. One is deemed a suicide the other an accident but the question is, is that the case?  And if so, why? On top of this, Ryan’s father is mixed up in events, and Ryan confesses to Daisy that there is someone else, but not who – she believes it’s another woman. Daisy throws him out and Joseph conveniently steps in with a place to stay. His place.

The Dangerous Seduction takes place over many months and the pace is perfect throughout. It never slows down and it is never boring. I found it hard to put down the night I started it and raced through it the second day. It is written in third person present tense which can be woeful if not written right, but this is good, strong writing. Both protagonists are clearly defined – Ryan the more naïve, loyal, eager and ambitious man. The man who wants to be like Joseph, wants to be with him. Joseph the cool, alpha male with occasional glimpses into something more, with definite moral… laxness. I could see where they were both coming from. I liked and disliked them both.

I loved The Dangerous Seduction. The writing was strong, the characterisations good, the plot flowed, it was incredibly erotic yet the book isn’t sex scene after sex scene. When is happens it is economical, but it zings! The machinations of the trial weren’t in depth but they served the story and style perfectly, it made the book moody. I wondered what was going to happen and I was truly unsure of how it would end. I loved that the author took the characters where they wanted to go, if she had made it prissy and clichéd I would have been royally ticked off. I loved the book and film references/comparisons. I can’t say too much more because I will spoil the plot and the outcome, and I don’t wish to do that. The ending is not a HEA, it is not cookie-cutter, but it is good, interesting, and suits the book to a T. There is a kicker to it and I liked that. I really do hope that A.N. Bond writes a follow up on Ryan and Joseph, but if not, c’est la vie.

Love your review. While I can tell that this would not be a ‘Cindi’ book, it still looks very good and well written.

I love your photos and the quote.

No, it isn’t a “Cindi” book. But is sure as heck is a Kazza book. You know this as you kept getting crazed emails as I read, lol.

Thanks, Cindi. It is very well written and, hallelujah, something different.

‘Different’ is good sometimes. Your emails weren’t crazed. They sucked me into the story with each one. I was eager to see what would happen next.

Yes, they were crazed, I’ve just anesthetised you to my brand of craziness now, lol. Different is good.
🙂

Great review, Kazza. This definitely sounds like a “Lisa” book. 🙂 The blurb caught my attention, but I didn’t pre-order it. I now plan on making that purchase after reading your review. Thanks!

Thanks, Lisa. I think it may well be a “Lisa” book too. Let me know how you go.
🙂
I know exactly what you mean, the blurb sucked me in as soon as I saw it.

This review has me wanting to read the book. Does it at least end happy?

Thank you. I’m glad my review helped you. It does end happily but it is left open to some interpretation. It isn’t the traditional HEA if that makes sense. If it sounds like you then I think you’ll really like it. It is on my books of the year pre list if that helps, Jana.

This is a new to me author and have read some amazing reviews of this book! I thought I read somewhere that a sequel is coming out soon – do you know if that is true?

I know that the author wants to write a sequel but they aren’t saying exactly when. I have an interview/giveaway with A N Bond here – http://ontopdownunderbookreviews.com/interview-and-giveaway-a-n-bond/#comment-7572 and that is discussed. I would love to revisit the characters and see what happens next myself, Lisa 🙂

The author did take a risk with writing this book but it really paid off. Thanks for your review.