Interview and Giveaway: A. N Bond 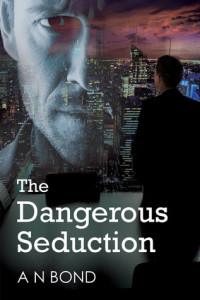 Today On Top Down Under has an author who was totally new to me until this year – until I read The Dangerous Seduction. Review here – NSFW. It definitely is a favourite of 2014.  Kazza and Cindi would like to extend a warm OTDU welcome to author A.N Bond. Thank you for kicking off our second year blog-versary.

**GIVEAWAY NOW OVER, CONGRATULATIONS TO SULA**

Kazza: I found The Dangerous Seduction to be refreshing. It has also stayed with me – I still remember the character’s names without any need for a prompt eight months after I read it. Joseph Van Aardt is a very intense character, a master manipulator. Ryan, naïve yet ambitious. Together it made for explosive chemistry. Where did these characters come from? Do you have muses in your head? Does something trigger an aha! moment where you suddenly see this story/ these characters unfold?

A N Bond: I’m a fan of noir films and stories, and I’ve always wanted to write a gay male version of the femme fatale archetype. My favourite femme fatale is Linda Fiorentino’s character in The Last Seduction – which of course is the film that inspired the title of the book. I love the way she operates in the film, smart and fearless and like you say, a master manipulator. She’s completely in charge of her destiny, manipulating the poor men who get in her way, and she’s always one step ahead of everyone else. This was the biggest inspiration for Joseph’s character. Like her, he is morally ambiguous and willing to do whatever it takes to make things work out the way he wants them to. One of the things that helped me write Joseph, particularly his scenes with Ryan, were to start from a standpoint where he would be lying half the time – he is a compulsive liar like the best femme fatales – but the other half he would be speaking the truth. It is definitely true that the character took on a life of his own. For example, one of the biggest revelations in the book wasn’t planned when I started, but just came about as I got into Joseph’s head. But once I thought of it I think it definitely qualified as an “Aha!” moment.

With Ryan, I wanted him to be a lot more than the innocent and stupid male who’s taken in by the femme fatale. Ryan is complicit in his seduction, and in his way, he is just as morally ambiguous as Joseph. When he first appears, he is completely in denial about who he really is. His denial about his sexuality (just to add that I don’t really mind how people want to label him – be it bisexual, or gay and closeted, or a primarily straight man who has sex with men) is symptomatic of his denial about his true nature and his own naiveté. He knows that he wants wealth and power and influence, but he’s still pretending to himself and everyone around him that he’s a good boy and that his ambition to succeed is just about being a good lawyer and being able to afford a good home for his fiancée, whereas it’s a lot more than that, and is his biggest flaw. Joseph of course recognises this in him from the beginning and it makes the seduction of Ryan pretty much a foregone conclusion.

Kazza: One of the things I did mention in my review is that I would love to revisit Joseph and Ryan. Has that been something you have given any thought to yourself? Perhaps a follow up to The Dangerous Seduction?

A N Bond: I did write the story and finish it with no thoughts of a sequel in mind. The ending was intentionally open-ended, and I have to admit I was surprised by how many people saw it as a cliffhanger, as that was never my intention. A lot of people who have reviewed or commented or written to me have asked about a sequel, so it is something I have considered. However, I don’t want to make any promises that I can’t keep, so I’m not promising either way, especially as I have a day job that has unfortunately got very busy in the last year. Having said that, I am quite attached to Joseph and Ryan and definitely interested to find out where they go next.

Kazza: The Dangerous Seduction was written in third person present tense, not an easy way to write. I’ve always been interested, what made you choose to write the book that way?

A N Bond: I tend to think a lot of scenes, like character thought-processes or dialogue, through in my head as I’m doing something else like walking or driving or lying in bed, and when I do that, the scenes are always in the present tense. When I do go to write it all down – and it never comes out as perfectly as it does in my head! – then I translate it into past tense, so it sounds more prose-y. With this story, that method wasn’t working and I kept getting stuck in scenes. Once I made the conscious decision to stop forcing everything into the past tense and just write it as it happened in my head, then I found the writing just flowed so much better. In retrospect, I think this might be because we are stuck in Ryan’s head most of the time, following his actions and thoughts. He is in a state of turmoil and change throughout a lot of the story, and I think the present tense conveys that kind of uneasiness and immediacy much better.

Kazza: Do you have any works in progress at the moment that readers could be on the look-out for? If so, can you share a bit about them?

A N Bond: I do have a couple of things on the go at the moment. I’m constantly working on something or another as I tend to go a bit crazy otherwise! I have a lot of unfinished stories on my hard-drive and lots of ideas, but it’s always finding the time and the discipline to sit down and write them. I guess a lot of writers feel like that.

I have a couple of story ideas on the go that are very different to The Dangerous Seduction. I would like to write a story set in London where I live with British characters, and I’d also like to write something set in the recent past. However, to really do it justice, I do need to do a lot more research, and of course I have to work out an actual plot!

Kazza: It would be nice to see some of them come to fruition.

Kazza: If you could name a few Influencing authors, who would they be? What books have stayed with you over the years?

A N Bond: My favourite book ever is still Wuthering Heights. I read it when I was a teenager and loved it then, and I still love it now, after many, many re-reads. I recently had an argument with a friend who hates the book, she says that the characters are all horrible and too unsympathetic – of course that is one of the reasons I like it so much! Antiheroes and flawed characters are always so much more interesting to me than traditional heroes. Vanity Fair is another of my favourite books that I have re-read more times than I can remember and Becky Sharpe one of my favourite ever characters.

Kazza: Something I ask everyone who pops on for an interview – if you could visit any place in the world where would it be, and why?

A N Bond: I don’t think I can answer with just one place; there are so many places I would love to visit. I’d love to visit Zambia for the wildlife or the amazing scenery, and India for the beautiful country and amazing food. Both would be incredible holiday experiences. When I was younger I was fascinated by Russian history and the Russian revolution, so St Petersburg and Moscow were top of my list of places to visit, I’d still like to fill that dream.

Thank you To A N Bond for taking part in On Top Down Under’s two year blog-versary.

To enter in the draw for a chance to win an e-book copy of the fantastic The Dangerous Seduction, simply enter a comment below before midnight US Eastern Standard Time Oct 6th to be in the draw. **(If you get a spam message on commenting don’t worry we will see your comment and post it here.)

A N BOND has been making up stories and writing them down since she was five years old. Back then, the stories were about magical hilltops and talking animals and contained lots of words like shimmering and glimmering. These days, A N Bond is still writing stories, though the settings are not so Disney inspired. When she isn’t writing, A N Bond loves walking and exploring less celebrated corners of London, watching and overanalyzing TV shows and films, playing videogames, and collecting Lego. When she isn’t doing those fun things, A N Bond works as a project manager in retail insurance.
A N Bond lives in London with her partner of fourteen years, a dog called Len, and a cat called Nigel.

Thanks for the giveaway and interview. I love India
. You just have to go. I’d love to win TDS.

India is pretty diverse and amazing, Jana. Thanks for being a part of the blog and the giveaway 🙂

A huge thank you to A.N. Bond for stopping by and to Kazza for such great questions. 🙂

Good luck to those entering the giveaway. The book looks fantastic!

I second that, Cindi 🙂

It does sound very tantalizing!

Thank you for introducing me to a new author and book that intrigues me and now sits on my wish list 🙂 I also enjoyed the interview and finding out a bit more about the author and character inspiration. I share the authors interest for Wuthering Heights, as the characters are flawed and I often prefer the imperfect hero and I also like the symbolism in the book, which you also get in film noir (character types, atmospheric lightening and film angle).

Thank you also for a chance to win this book

Ah, Wuthering heights. I love that book so much as well, Sula.

A N Bond is a pretty private person and I feel very honoured that she joined us for our blog-versary. I loved The Dangerous Seduction. Good luck, you’re in the draw!

I love the idea of noir turned on its head a bit. That psychological bent to all the interactions is just fascinating, and it’s wonderful how the audience is being manipulated at the same time a character/characters are. It’s just fun all around. I wouldn’t want my life to be like one, but reading and watching it is great. Thanks to A.N. Bond and Kazza for the interview. I think I missed that review the first time around, so I’m glad you linked to it. Good stuff!

I don’t know if I’m late for this give away but could you put me in.

Best, and keep on blogging.

Thank you to everyone who took part. Congratulations to Sula 🙂