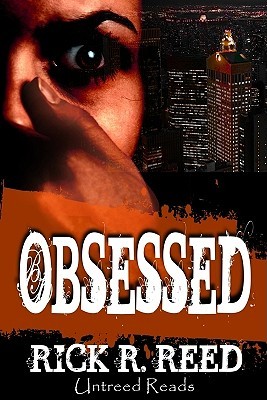 I kill, therefore I am…

Voices slam through the corridor of his wounded mind. The words of his dead sister cry out. His parents’ taunts fill the silent room where he sits and waits–waits for the murderous rage, filling him with strength, driving him to kill, to touch the cold flesh, taste the warm blood–to feel alive again… A witness has seen him, but his killing only turns her on and now she wants to protect him. His wife suspects him, but the private detective she hired cannot stop him. Joe MacAree fears nothing–except that he may no longer be human. The thirst that drives him is relentless, moving deeper and deeper into his own shattering, private realm, where each murder is a delicious new gift of life, where revulsion is beauty, and the obsession will never let him go.

It’s no secret to anyone who reads my reviews that I’m a huge Rick R. Reed fan. But what most don’t know is that I discovered him originally over my love of horror. Yes, I read and review a lot of romance but horror is one of my first loves. Only after I started reading Obsessed did I discover that this was the author’s first book, originally published many years ago. I don’t normally read books written so far back, as I always miss the technology – cell phones, computers, etc. – of those in more recent books. That was not the case with Obsessed. I didn’t find myself missing it at all. If anything, the lack of current technology only made the story better. It showed how things were done in investigations long before DNA testing and the advent of current investigative procedures.

Joe MacAree is married to a beautiful fashion model, Anne. They have a loving marriage, both to the outside world, and not. It is obvious from the very beginning that Joe and Anne love each other deeply. There are no secrets between the two (one thinks) and their sex life is good. Everything is going well until Joe starts having unexplained absences. When Anne starts to question and his answers are obvious lies, they drift apart. When the lies and disappearances continue, Anne gets fed up and asks Joe for a separation. This doesn’t go well, as Joe is not only in love with his wife, he is obsessed with her. Obsessed to the point where the separation causes Joe to lose what little sanity he had shown the world up to that point. He loses his grip on reality completely and goes on a downward spiral.

What Anne isn’t aware of, but the reader is, is that Joe is a serial killer and his frequent absences are from when he is out killing women. Not only killing them, but slicing them and drinking their blood. He also gains sexual satisfaction from the killings, from either raping the victim or ejaculating on or near the body. He becomes so obsessed that he allows his marriage to fall apart as a result. The obsession to kill, to drink the blood, to get off sexually.

Until the separation, he had kept his facade up with Anne and the rest of the world. He would do his killing and come home to his wife and pretend all was normal. When Anne kicks him out is when the insanity takes over and Joe completely loses control. He abandons his job, his friends, everything. He becomes a totally different person.

For the first time ever, Joe has made a mistake during one of his killings. He left evidence behind. This evidence is 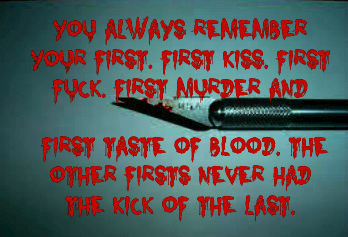 not found by the crime scene investigators. It is found by the husband of the victim, Maggie Mazursky – the victim who was sliced up, raped and whose blood Joe drank before leaving her body for her husband to find. Joe also left a witness. Not a witness to the actual killing. A witness to his going in and out of the residence of the victim. One would think the witness, Pat Young, would do the right thing and tell the police about the man who was across the street at the exact time of the murder. Unfortunately, Pat, a woman paralyzed and confined to a wheelchair, only saw dollar signs when she saw the man that day. When Joe goes back to the scene of the crime in hopes of finding the evidence he left behind, Pat makes contact. With blackmail in mind, and no thoughts at all of doing the right thing, Pat and Joe begin an odd relationship. A relationship that continues throughout the rest of the story. A warped relationship. One that is disturbing on so many levels that one would have to read the book in order to understand it.

Then there is Nick. Nick is a private investigator hired by Anne to discover where Joe goes during his unexplained absences. Nick turns out to be more than just an investigator to Anne but I won’t give that away. While Nick is investigating, more victims are piling up. Little by little the story behind Joe’s madness is revealed, not only to the reader, but to Anne as well.

Joe Mazursky, Maggie’s husband, is so distraught over losing his wife that instead of turning over the evidence found close to where his wife was murdered, he uses it to find the killer so that he can make sure justice is served, and not by the justice system.

When the truth comes out, everything falls apart for not only Joe, but several of the secondary characters as well.

The reader is aware of who the serial killer is from almost the first page. While not a whodunnit, it is a story that will leave the reader wondering why as they rush to the next page to see what other horrors Joe will inflict on unsuspecting victims. You learn what caused him to become the monster he became and why he drinks, and becomes obsessed with, the blood of his victims. You get taken inside the head of a serial killer, as well as into the minds of those whose lives he destroys. Not just the families of the victims, but of his wife and others as well.

The violence in this book is pretty gruesome so don’t go into it unless you are prepared. There are quite a few 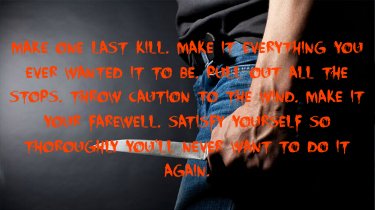 victims and each killing is described.  Also, the history behind Joe’s behavior, and some of Joe’s actions during the murders, could be considered triggers so keep that in mind. I found myself feeling sympathy for Joe a few times, as no one should have to suffer what he did as a child, by those who were supposed to love and protect him. It didn’t take long before that sympathy disappeared as he continued with his murderous obsession.

The sex between Joe and Anne (and that of other characters as well)  is written well and fairly graphically. While I know that most of the books I’ve read and reviewed on On Top Down Under are M/M books (including those written by Rick R. Reed), the sex in this book is strictly between males and females. M/M may be my genre of choice these days but if Rick Reed has written it, I’ll be reading it, regardless of the genders of the characters involved. This is a love story (more than one, actually) but yet not. Only by reading this book would you understand what I mean.

Overall, I think it’s safe to say that I thoroughly enjoyed this book. I had to put my Kindle down to do other things for a few days and was itching the entire time to get back into it. I loved the ending and the Epilogue. Rick is known to throw things out there that will make the reader think, and he definitely succeeded with Obsessed. I read the Epilogue twice to make sure I got it. Brilliant.

Another great book by Rick R. Reed.  The book may be older but don’t let that keep you from checking it out. If you love a good thriller, and don’t mind a bit of violence, I highly recommend this.

I am not a horror reader, Cindi, but this books sounds really, really good. I like the psychology behind it all, though. Your review is awesome, as are the pictures with the quotes – it makes me want to pick it up straight away and read it.

I LOVE horror (as you know) and Rick was the first author I discovered in the genre on Goodreads. This is one of my favorites of all of his that I’ve read so far. The way everything comes together is amazing.

It’s dark but you would enjoy it because of the psychological aspects of it.. Re: Joe, and what made him the ‘monster’ he became.

Thank you so much, Cindi, for that inspired review! I absolutely LOVED the pullout quotes and accompanying art. It’s nice to know that something I wrote so long ago still has some legs, even if they are bloody. Glad you enjoyed!

You’re very welcome, Rick. What a great book! This is the type of story I devour when I pull away from romance on occasion. Thankfully, I own a lot of your others that are similar.