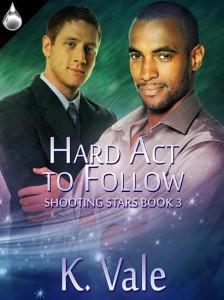 Twenty three year old Kyrie Li is in his final semester at Boston University. When he finishes he is hoping to go to New York with his gal-pal, Livvy, and work in theatre. Kyrie’s best friend is Greg, they have gaming nights together, they go out together when it suits, and they get together at all major Li family events and holidays. They have known each other for over seven years – Greg used to be married to Jasmine, Kyrie’s sister.

Thirty year old Greg Dwyer is an up and coming lawyer. He works hard and has the carrot of becoming a junior partner at a prestigious Boston law firm dangling in front of him. He and Kyrie’s sister may be divorced but it is amicable and the Li family, one part African-American, one part Korean, are very loving and still look upon Greg as a son. They also know that Greg and Kyrie have forged a tight friendship over the past seven or so years.

In Double Takes the reader knew that the seemingly straight Greg 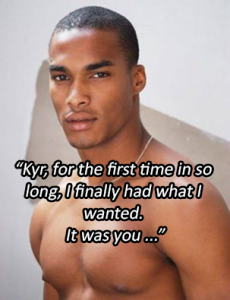 saw Kyrie as more than a friend, although he played it close to his chest, and in Hard Act to Follow that relationship comes to fruition. In many ways it is an opposites attracts book – Kyrie is flamboyant, Greg is conservative, Kyrie is studying drama, Greg is a lawyer, Kyrie is gay, Greg is “straight.” Kyrie’s family is all-encompassing, Greg’s is uptight.

While there is a little drama in the book it is nothing huge, just enough to make the relationship a little harder to work for. Both men think they aren’t right for the other. Greg worries what the Li family will think of him being with Kyrie after having been married to Jasmine. He taught Kyrie how to drive when Kyrie was sixteen, for crying out loud, how can he have intimacy with him with that sort of history? Will he lose the Li family, who mean so much, if he is with Kyrie? Kyrie is just embarking on his career, won’t stodgy Greg drag him down? But he fantasises over Kyrie, dreams about him. Besides, Kyrie seems to be the only one who didn’t get the memo that he and Jasmine are good with not being married anymore, he can’t want Greg. 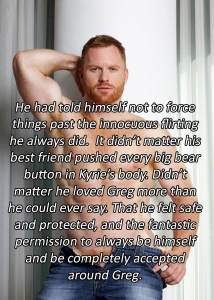 back together and he would never want to be the person who would get in the way of that. Sure, he and Greg are good friends, they love gaming together, Greg is dependable and like his rock, but he doesn’t want to cross the wrong line. One night, Kyrie kinda, sorta…encourages Greg to drink a bit more than he usually does and they end up in bed together. Kyrie loved it but is mortified the next morning. Why did he seduce his sister’s ex and his best friend? He had too much to drink as well. It may have been the best sex of his life, but what is going to happen now? How does he get out of this?

Both men do the same thing, pretend they don’t remember what happened after they got home. Obviously they both do. Then they  continue to handle it in an awkward manner for several weeks after. It also makes them unhappy not being together. After you have something you wanted so much it isn’t easy to turn that off –

If he ever thought acting on his urges would ease the tension he felt with Kyrie, he was preposterously wrong. Knowing what it was like to be naked and uninhibited with his best friend was far worse. Now he knew what he’d miss. God, if he had to watch Kyrie date other guys he’d lose his fucking mind.

But to help matters along, events occur where Greg has to go to New York and make sure Kyrie is okay. From here it hots up and they make sure they cement the feelings that started in Boston.

Hard Act to Follow is another fun, easy and really sexy read from Kimber Vale. Both MC’s have a perspective which gives the reader  a good indication of how they are feeling throughout, and it works well in this book. The friendship and banter between Kyrie and Livvy was also fun and young. Even though different, I enjoyed how Kyrie and Greg meshed as a couple. I loved that this (gay) couple is interracial – thank you! Even though Kyrie appeared in Double Takes, as did Greg, and Gio makes an appearance here, this is a standalone book. I was happy to see Kyrie get his man. I do like a femme character, and Kyrie was sassy, he was flamboyant and he was well drawn. I loved his fuck-me boots and satin undies. I liked how there was no fuss about Greg coming out for Kyrie –  it is not a GFY. I’m not sure if this is leading into another look at Kyrie and Greg as something was kind of left up in the air, but I would definitely revisit them in a novella. Not sure where-to now with this series, but I’m happy to read anything set in this upbeat and sexy world. 4.5 Stars! 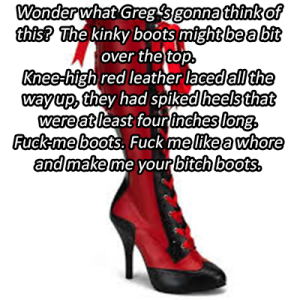 First off, I love the kinky boots. 😉 “Fuck me like a whore and make me your bitch boots”. Gotta love it.

I can tell I would totally love this story, and the ones before it. I would adore Kyrie. That, I have no doubt.

Thanks so much, Kazza! I love that you used a Seth Fornea pic for Greg. I definitely have a few of those on my hard drive for inspiration. I’m such a sucker for a redhead. 😉 And I love the novella idea! I was considering another full length novel, but I started a new series and wasn’t sure about juggling my writing time. A Shooting Stars 3.5 might be a lot of fun and way less intimidating! Just a little side project… 🙂 Those boys have some unfinished business to clear up and some new friends to meet. I’ll need… Read more »

You’re welcome. I thoroughly enjoyed my time spent with Kyrie and Greg.

Seth Fornea is absolutely gorgeous. He’s so very ‘Greg’ to me.

I would love a Shooting Stars 3.5. I agree – more friends, more fun, some resolution, more of them! I’m so there if you write it, Kimber 🙂