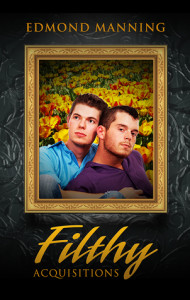 Keldon Thurman hates his job, purchasing serial killer art for a private investor. He would quit if he weren’t completely impoverished, but with no life skills and no ways to generate income, Keldon has no options.

However, Acquisition Number Five proves to be more challenging than expected. Wheel-chair bound Irene Woullet and her handsome nurse caretaker, Joshua Greene, refuse to cooperate. Keldon’s only chance is to seduce the old-fashioned, simple-living Josh in the hopes that Joshua can persuade Irene. But Keldon has to work fast—he has only two dates to win Josh’s affection.

With love’s potential in bloom, how can Keldon live with his own worsening conscience as he gathers these filthy acquisitions?

If ever I’ve read a blurb that describes a book but cannot do the writing justice, then the official blurb for Filthy Acquisitions is it. It isn’t possible to describe the depth of all the characters – whether they are the Turner’s, in it for a fleeting moment, to secondary characters, Catherine Maggiarra and Irene Woullet, through to the MC’s, Keldon and Josh.

Keldon Thurman is twenty nine and has a contracted job to collect art for a wealthy benefactor. He’s being paid a substantial amount to obtain fifteen specific pieces of art. All painted by one ‘artist,’  James Wayne Merrick. The artist is no great name in the art world, in fact his work is basic, but, like a lot of artists whose work is sought-after when dead, there is a market for his work as an infamous serial killer. Everyone associated with the art is impacted in one way or another – greed, lack of empathy, feeling dirty, outraged, and other issues I won’t go into. 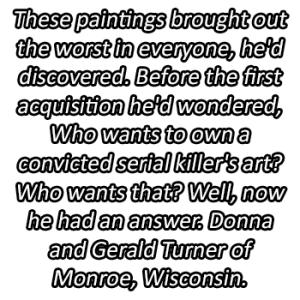 troubling how the towns he visits to pick up the art, the people, appear  so ordinary. There should be something distinguishing about them, about people who go through the motions of stalking, talking to, and dealing with a serial killer to get a hold of his art, shouldn’t there? Well, something outside the fact that they don’t care what he did and that they always think they can somehow get more money for it.

Keldon is broke, needs to pay rent, has no discernible employment skillset or qualifications, yet his employer selected him to collect the pieces. It may not sit well on him, it doesn’t. He may not understand why she chose him, he doesn’t, but it does offer him something he does understand and needs – money.

The Turners disgusted him, his wealthy patron disgusted him, everything about this work disgusted him, a low-simmering burn in the back of his mind. But the moment disgust threatened to evolve into a strong opinion he reminded himself he did not care, he could not afford to care. He did this for the money. Keldon understood being disgusted with oneself. The Turners had flattered a serial killer for two years of that murderer’s prison sentence so he would give them his original art. So what? For the money he would make brokering all fifteen pieces of serial-killer art, Keldon’s nebulous morality could ignore the disgust, or at least mutter to itself in the corner.

But, after acquisition number four from the Turners, Keldon uncharacteristically breaks down after leaving them with less money than they originally planned and making them feel somewhat smaller for having had the art and dealing with him. He is nothing if not good at what he does – discreet, aloof, attractive, impeccably groomed and outwardly arrogant in negotiations. But his job is taking a definite toll.

Keldon’s working life has consisted of two older, wealthy boyfriends who kept him in a lifestyle he liked for quite a few years. He lost friends, left tertiary education, to devote time to making sure he pleased both Stephen and Aamir. He knows how to please those who pay his way. So, given his lack of resume, his skillset, the reader soon sees why another wealthy person, Catherine Maggiarra, employed Keldon for this job and offered him good money to please her need for the serial-killer art.

For acquisition number five, Keldon is going to Madsion, Wisconsin. As per usual he is given an extensive brief on the person he is to obtain the painting from – Irene Woullet; an older woman who is wheelchair bound, terminally ill and in debt after extensive medical treatment. She has a male nurse, Joshua, but unlike the other acquisitions, Irene Woullet does not know she has a painting by a serial killer in her possession. This time Keldon is to make an offer for all the paintings in the house so Mrs Woullet doesn’t suspect who painted the artwork. Catherine Magiarra wants no drama or discussion about the paintings. Each seller thinks they are selling to a Mr. Mercer and must sign a document agreeing that they won’t discuss anything to do with the terms of their deal for twelve months.

This time things are different. Where Keldon knows the behaviour of the previous people he dealt with, Irene and Josh are nothing like them. Initially Irene and Josh give off the vibe that they tolerate each other – her daughter organised Josh as the nurse for her mother – and there is… resignation to that fact. Except Irene is keenly interested in the exact piece the art benefactor is after. Keldon isn’t at liberty to say and he’s always discreet – Mrs Maggiarra is offering a good price for all the artwork Irene Woullet owns, that’s all she needs to know.

Staring Keldon down, Joshua, said, “It’s one of the paintings in the den.” “Are you sure?” Irene said. “I didn’t see him react to anything there.”

But Irene and Josh are very much a tight, intelligent unit and they work him while he thinks he has been working them. There has to be something more to this. They must know exactly what painting Keldon’s employer is really after and why.

Keldon thinks on his feet, he finds Josh attractive – he is big and strong and, while no Zac Effron or Ryan Gosling, he appeals to Keldon. And dating is something Keldon can do well. Yes, he can use dating skills to persuade Josh this is not shady and he can  convince Irene Woullet, through Josh, to sell the painting to him and help meet his quota. He’ll wine and dine Josh in Chicago and win him over with glitz and glam, this country mouse. Josh and Irene agree, but there are conditions. There has to be two dates and one has to be in Madison on Josh’s home turf.

From the first date, but particularly from the second, Keldon and Josh grow close – truth or date is an interesting game. Both are 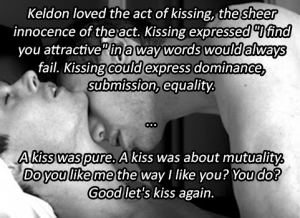 decent guys with different outlooks on life and in a vastly different headspace – Keldon is lost and alone and disgusted with what he is doing. Josh is alone through work hours and dealing with elderly, terminal patients, but far from lost and he likes his work. Keldon values money above its weight and Josh values the Earth and feels strongly about ecology and his carbon footprint. From the Chicago date, with limo’s and clubbing, to the Madison date, with tulips, bike riding and planting tomatoes, the men forge a bond and intimacy. However, serial killer’s have a habit of impacting people and lives profoundly. Will it now destroy a burgeoning relationship as well?

This book has a beautiful, meaningful title. Writing that surpassed my expectations of said beautiful, meaningful title. Filthy Acquisitions is not fast paced. There is no major angst, per se, yet it elicits strong emotions from the reader. It is sexy but not overtly so. It is quite romantic, but that is not all there is. It is character driven with introspection, perfect dialogue, and has glorious descriptions of people, towns and behaviour. There’s strong characterisations, incredibly important for me, and there’s suspense behind the acquisition of the paintings. I loved Keldon and Josh, and others. I’ll also add that the book ends on a (satisfying) HFN, for those who need to know. Most of all, Edmond Manning is a wonderful author and I highly recommend reading Filthy Acquisitions so you can experience it for yourself. 5 ‘Truth or Date’ Stars! 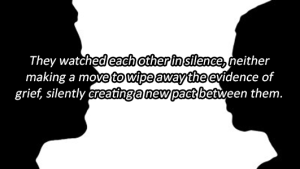 I love when an author brings all the characters out, whether main or secondary, as I can tell this one did in this book. The ‘serial killer paintings’ drew me in right off. Before I was done reading your review, I was eager to know why it was so important for the couple to have all of them.

Sometimes a slow-build is much better than rush, rush. I can tell I will love this book and that I’ll adore Keldon and Josh. I love the quotes and the pic. I’m adding this to my TBR.

I really needed this calibre of book and I was so glad I noticed it. Just lovely.