Hi! We’re Lisa Henry and J.A. Rock, the authors of THE MERCHANT OF DEATH. We’re touring the web talking about our influences, our processes, anything we can think about actually, and even giving you guys a sneak peak or two! And what would a blog tour be without a contest? Check out the details at the bottom of the post to see what you can win!

Today, we’ve turned the guest post over to Henry. Take it away, Henry:

Henry Page here. So I’ll admit it: I like Mac. Even though he’s crabby and even though he works for the FBI, which is my third least favorite shadowy government organization, and EVEN THOUGH he recently threw away a package of Oreos I was eating from because it was “giving him cravings.”

The man needs to loosen up. Seriously. I don’t know what would do it though. Acupuncture needles would bounce right off his skin.

In case you ever find yourself in a predicament like mine, just know that there are plenty of ways to MacGyver your favorite junk food with ingredients from your kitchen. Sure, it takes a little time, but the look on your G-man’s face when he sees you’ve covered every available inch of counter space (and certain portions of your own body) with homemade Oreos? Priceless. Bonus points for getting him to do that little clench-y thing with his hand.

6oz rolling fondant icing (available at your local party supply store. Unless you’re not allowed in there anymore. In which case, just grab a cowboy hat off the front rack and put it on as you enter the store. Now you’re incognito.)

Sift together the cocoa powder, flour, baking powder, salt in a large bowl, and set aside

In a large mixing bowl, cream the butter, sugar and brown sugar. Add the egg & yolk one at a time, then the vanilla, followed by the instant coffee, mixing in each ingredient before adding the next.

Add the dry ingredients and mix until just blended.

Divide the dough into 2 pieces, wrap with plastic wrap and cool in the refrigerator at least 1 hour.

Place one piece between 2 lightly floured sheets of parchment paper and roll into a ¼-inch-thick rectangle. Repeat with the other piece of dough.

Using a 2 inch round cookie cutter (or a shot glass. Mac has a lot of those leftover from the days when he was apparently fun), cut the dough into about 64 circles. Any scraps will have to be re-chilled before you can re-roll it.

Place the cookies about 2 inches apart on ungreased baking sheets and chill for 20 minutes.

Preheat the oven to 325f—or 165c, for those of you elsewhere in the world.

Bake the cookies about 20 minutes be sure not to let them get too dark or the cookie will become bitter.

Roll out the fondant, using icing sugar for rolling (not flour) to just over a quarter of an inch thickness and cut into circles using the same cookie cutter as for the cookies.

Brush one side of the fondant with a little milk and press this onto the bottom of one cookie.

Brush the other side of the fondant with a little water and place the bottom of a second cookie, pressing gently to secure the sandwich.

Repeat with the remaining cookies, re-rolling the fondant if needed.

About THE MERCHANT OF DEATH:

All’s fair in love and war. 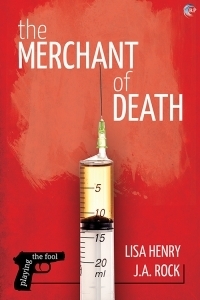 There’s something rotten in the state of Indiana. When con man Henry Page takes it upon himself to investigate the death of an elderly patient at a care facility, he does so in true Shakespearean tradition: dressed as a girl.

FBI Agent Ryan “Mac” McGuinness has more to worry about than Henry’s latest crazy idea. Someone is trying to send him a message—via a corpse with a couple of bullets in it. He needs to figure out who’s trying to set him up before he gets arrested, and he really doesn’t have time for Henry’s shenanigans. Then again, he’d probably be able to focus better if Henry didn’t look so damn distracting in a babydoll dress and a wig.

But when Mac discovers that Henry has been keeping a secret that connects the cases, he has to find a way to live on the right side of the law when he just might be in love with the wrong sort of man.

You can check out THE MERCHANT OF DEATH at Riptide.

Thanks for following our tour! To celebrate our release, we’re giving away an awesome prize – an ebook copy of a novel of your choice from either of our back catalogs. We’re also giving away a $20 Riptide gift voucher, and Mac’s favorite coffee mug. What? It’s not like he’s supposed to be drinking coffee.

All you have to do is leave a comment on this post with a way for us to contact you, be it your email, your twitter, or a link to your facebook or goodreads account. Please put your email in the body of the comment, not just in email section of the comment form, because we won’t be able to see it otherwise! On February 12, 2015, we’ll draw a winner from all eligible comments! Be sure to follow the whole tour, because the more comments you leave, the more chances you have to win the prize!

The fondant filling is a clever idea!

I want to print this out just for the little asides even if I never get around to making them. 😀 aahickmanathotmaildotcom

What a great giveaway! I love the recipe. 🙂

It really is a great giveaway. It’s also a little different with the Oreo recipe thrown in (“Kazza’s son” will be pinching that one?) and Henry muscling on in too 🙂

Great review Kazza. And I loved the homemade Oreos. Could totally see Henry making them just to irritate Mac.

Thanks, Waxapplelover – love that name – this is a personal favourite of mine now. Henry would definitely do it to irritate Mac and then he’d have the full support of Mac’s colleagues. Poor Mac ! 🙂

Love the recipe! I need to try it. amaquilante(at)gmail(dot)com

Thanks, Henry, for the recipe and the tip about using a shot glass for a cutter. That may come in handy.

Just finished Merchant of Death last night and loved it!

Love that! Count me in Henry email: jdr@internode.on.net
Can’t wait to dive into this book J

Will have to try out the recipe! Thanks!!!

Love it! Revenge for throwing out oreos? Making more…. LOL