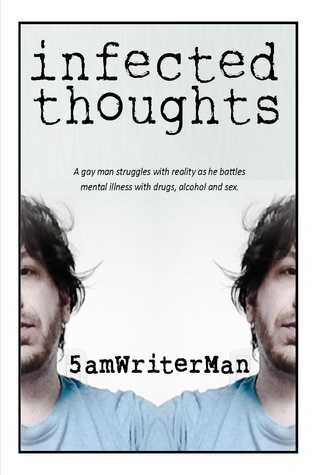 This novella is hard to review without spoilers. Even to talk about the main premise is giving too much away. The author has actually done a good job in the blurb. But I’ll add a few thoughts –

Guy is a forty year old man who now hates his job, feels unsupported and put-upon by his boss and can’t identify with his co-workers anymore. His 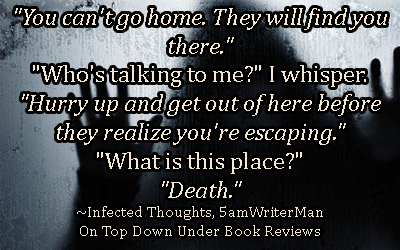 partner, Russ, seems to interchange from non-caring to caring to trying to kill Guy. Guy drinks and he downs Valium, amongst other things. He has random thoughts that become more abstract. He meets a younger man in his twenties, Justin. He’s cute, likes Guy’s hairy chest. Doesn’t mind that he’s older – even if he passes comment at times. They hook up, have sex and they’re going to run away together. Away from people who want Guy. Guy and Justin appreciate vodka and pills, and the idea of going on a quest. Russ wouldn’t go on a quest. Justin alternates from gorgeous to bruised and battered to appearing in dreamscapes and morphing into Russ.

This it is not a romance, although there is a certain love in it. I guess. I 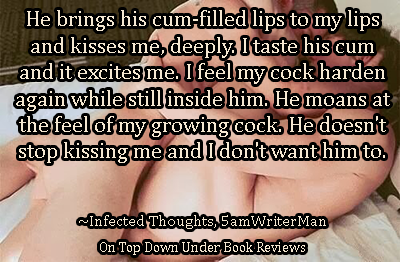 There’s a confusing unease surrounding the book from page one, and it’s quite deliberate. Even the use of language is confronting at times, including Guy calling his boss Miserella the Cunt – it’s not that a particular word is offensive, in and of itself, it’s the subtext and intensity that accompanies it that spikes the senses.  Uncomfortable, foreboding feelings or not, it made me want to turn those Kindle pages as fast as I could to see what was going to happen to Guy. Guy and Russ. Guy and Justin. Guy and mystery-break-the-glass-man. Guy and his left-ear voice. Who are the people that inhabit Guy’s world and are they as they seem? Is someone after him? Where is he?

“Justin, you’re here! I missed you.”
He sits next to me, smiling, without saying a word.
“What is this place? It’s beautiful and warm and serene. Can we stay here forever?”
“This is your forever, Guy, and we’ll be here together,” says Justin, his voice sounding different yet familiar.

“Love doesn’t exist,” says the voice in my left ear. “Leave it alone.”
“If this isn’t love then what is it,” I whisper to the air around me.
“Watch out for him. He’s a virus,” was the voices response. And then it goes quiet.

If you look there are tells, sweetie. There are clues, Roxette-whistling-humming-people. But here’s the thing, I really, really, REALLY thought I had it pegged how this novella would end…and I was wrong. I was right that it couldn’t end well, no brainer, but not how it ended or…. God, this is a terrible review. My hands are tied, so…

If you like MM or gay fictional stories that are different – hey, we all complain about the same-same feel within genre at times – then this is definitely worth a read. It cost me the princely sum of $0.86 cents on Amazon. I thought, ‘if it’s not good, no big deal.’ What I got was a total bargain, something that I’m still thinking about over a day after I finished it. It isn’t perfect, it needed a tiny bit of polish, but who cares? It’s inexpensive, it’s riveting storytelling, and, sadly, it’s quite raw but honest – all seventy four pages.

I thought I was on a quest to paradise but everything is changing and I’m being crushed by the weight of it all.

Okay, so no romance. No HEA. But if you like ‘different’ and if you like psychological reading with an emphasis on depressive mental health issues (raises own hand) then it’s here. Know that there is also sex that is unsafe, but this is about serious mental instability combined with drug and alcohol abuse –  so whether you like it or not, it’s realistic. Oh, and if you like to think and say ‘aha!’ then it’s another reason to read Infected Thoughts. I was surprised and happy… in a sad sort of way. Stuff it, I’m giving this novella 5 Stars because I am still thinking about it!

Wow, what a review. You didn’t give anything away, but you said enough to make me want to go right now and buy the book.

Great review of what I can tell is a very emotional story. You know a book is good when it has you still thinking about it long after you finish it.

Thanks Cindi. I wanted to write more about it but that would spoil it. It’s definitely one for you when you have the time.

OMG…Wow! Thanks so much for the wonderful and honest review!

You’re welcome. It was such a good novella 🙂