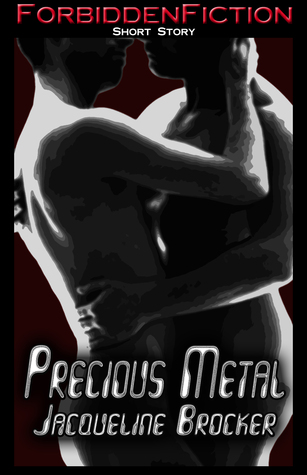 Forty three year old Kay and twenty something Hector live on Mars, they moved in permanently six months after their first night together. Kay is a comedian who was left behind on a tour of Mars and figures he’ll work there until he can get back to Earth. He has a job in a Martian bar and it’s here he met Hector. Hector was this young, big and healthy “colossus” who tops the older, smaller Kay from the beginning. Hector works for LanceCorp and is given an opportunity to work on the tower group for better pay. Basically, Hector is given a more dangerous job with danger-money and he is young and feels indestructible. He also likes the idea of more money and when given the chance he jumps at it.

Precious Metal actually starts post-Hector’s-accident, after LanceCorp have rebuilt him and six others involved in a lift and cable accident. Flashbacks to pre-accident fill in the blanks. Hector now has two new legs, one new arm, one new eye, and a new jaw. His body is part human and part cyborg. The problem is, Kay isn’t coping with his rebuilt partner. He looks at him and is unnerved about the whirring or creaking metallic sounds Hector makes, the real look of his replaced eye, that one I personally didn’t get, and his metallic looking jaw. Obviously Hector has been through a lot, and having his partner feel uncomfortable around him, having a flaccid cock when he is touched by him, is upsetting to Hector.

The concept is a good one – two people in a loving relationship adjusting to something new. It can be difficult to experience change but I just found Kay to be selfish for a lot of the book. I felt like I was judging him – which I hated –  but he didn’t give me a lot of room to feel any other way. When you ask someone why he let the company rebuild him, when the alternative would have been death/no Hector, well, I felt put off.

There are some touching moments – when families get to see their loved ones weeks after the initial accident, including Kay and Hector, when Kay finally gains more acceptance. But there isn’t enough time to concentrate on the MCs or on touching moments. Kay also had a real dislike of LanceCorp, felt Hector was young and just settling for a company that “hires for life,” and I didn’t understand his sentiments. Why the dislike of LanceCorp? I need to know these sorts of things. Why is working for one company such a bad thing?

This short novella is just okay. The writing is not bad but it’s stilted. It really is hard to write sci-fi in so few words. You need to have good world-building or very strong characters and situations that enable the reader to experience that place and time. I believe Precious Metal would have been so much better with more development of the story and the characters. It had such promise. The connection with the characters started to develop right near the end, particularly Kay who I’d struggled with for a while, then it was all over. It did end in a nice enough way. The concept for the story is a good one but it didn’t deliver enough overall for me to feel fully attached… and I need that strong attachment in my reading. 2.5 Stars!

This looks like it could’ve been an interesting story had it been elaborated on more. That is a very small word count for sci-fi, in my opinion.

Thanks, Cindi. Yes, 6,100 words for sci-fi proved to be too small. It had a good idea about change and acceptance, but it couldn’t be fully realised.

The plot is really interesting and it caught my eye too. If it had been longer I feel it would have been much better for it, Paul.