The Merchant of Death (Playing the Fool #2) by Lisa Henry and J.A Rock 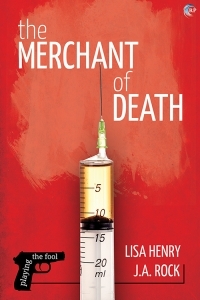 All’s fair in love and war.

There’s something rotten in the state of Indiana. When con man Henry Page takes it upon himself to investigate the death of an elderly patient at a care facility, he does so in true Shakespearean tradition: dressed as a girl.

FBI Agent Ryan “Mac” McGuinness has more to worry about than Henry’s latest crazy idea. Someone is trying to send him a message—via a corpse with a couple of bullets in it. He needs to figure out who’s trying to set him up before he gets arrested, and he really doesn’t have time for Henry’s shenanigans. Then again, he’d probably be able to focus better if Henry didn’t look so damn distracting in a babydoll dress and a wig.

But when Mac discovers that Henry has been keeping a secret that connects the cases, he has to find a way to live on the right side of the law when he just might be in love with the wrong sort of man.

The Merchant of Death picks up where The Two Gentlemen of Altona finished off – after Henry has run. Again. This time it’s to Zionsville to his twin sister, Viola. Viola is upset and has taken off from St. Albinus, a care facility that she resides at – it seems running is in the genes. Viola suffered a brain trauma at sixteen and Henry has looked out for her ever since. Feels the pain and guilt of Vi being locked inside a younger person’s mind. Viola claims an angel has taken Mr. Crowley – her friend at St. Albinus – and she’s scared. At first Henry isn’t sure whether Vi is seeing things, just worried about nothing, or it’s to do with her injury. But it’s Vi, and it’s what they do for each other. It’s what he does for her now.

“What if… what if I go to St. Albinus and make sure the angel’s gone?” He didn’t even know what he was promising, not really. He didn’t know how to vanquish imaginary monsters. Maybe by shining a flashlight under the bed the way Viola had done for him when they were kids. Or by putting on their mom’s shoes and stomping around because monsters hated stomping. For as long as he could remember she had been full of fierce protectiveness and courage.

However, it soon becomes apparent that something has happened to Mr. Crowley and Henry makes sure to take Vi somewhere safe – although safe is a relative term when you go to the Court – while he goes undercover to investigate St. Albinus….as Viola.

Meanwhile, back in Indiana-FBI-land, Mac is in the latter stages of recovery after being shot. He’s not happy that his star witness to crime lord Dean Maxfield’s trial is on the run, but he finds himself with bigger issues on his plate. There’s a couple of mysteries running concurrently in this book. Who are the bad guys at St. Albinus? What angel is Viola talking about? And who wants Mac framed? Just how far are they prepared to go to? And why? Pretty far it seems, so what’s up with that? The OPR, or Office of Professional Responsibility, is suddenly riding Mac’s arse. Hard. Janice Bixlar seems overly keen on nailing Mac for something-anything.  It ties into previous cases Mac’s worked as well as a current ‘John Doe.’ Not to mention Mac becomes embroiled in Henry’s Hardy Boy escapades at St. Albinus.

On top of the mysteries, which are more well-developed in this instalment, there’s the continuing complicated relationship between Mac and Henry/Sebastian. Both

men think about the other no matter how hard they try to do otherwise. The week in the cabin outside Altona has left its mark. Not to mention there is now Henry’s relationship with his sister, Viola, which is brought right out into the light this time around. Henry’s life has been a hard one and he feels it. There is immense guilt around Viola’s injury which Henry/Sebastian can’t stop punishing himself for and impacts his relationships across the board. Mind you, he is the only one who is so down on him. His life is too painful for a twenty five year old and you do understand just why he does what he does. Why he seems almost split in terms of his nature, behaviour,  and who he is.

Viola looked shocked. “Fuck is a rude word.”
“I know it is.” Henry tried not to remember how she was the one who had taught it to him in the first place. “Sorry.”
God, he was so fucking sorry. He’d been sorry for nine years now, because it was all his fault.
…

When their mom was good, she was great, but when she was on smack… Well, the good times were harder and harder to remember. And at the end there had been none at all.

This time there are three POV – Henry, Mac, and Viola. I liked the way Henry and Rock used Viola to paint another side to Henry/Sebastian’s life – past and present – as well as her ideas on people around her. While she certainly had child-like qualities she was anything but simplistic in her ideas and thoughts. Her frustrations. Her inability to always be rational and articulate her thoughts was spot-on. But her thoughts always had amazing clarity and I loved Viola.

Viola glanced down the hall, and then back at Stacy. “Is Carson mean to him?”
Stacy hesitated a while. “Rem’s pretty mean to himself.”
Viola understood that. Sebastian had been mean to himself after her accident.

She provided some grounding to a story that, apart from being humorous, could be frustrating when the guys can’t say what’s in their hearts. But is isn’t lack of communication to drive a plot. These two men are from different backgrounds – principals, drivers, family – and can’t yet have that same ease of uncomplicated clarity Viola is permitted. But communication issues and worries aside, the dialogue is delicious, touching, funny. The relationship is well paced for the trilogy. I feel like I know both of the MCs so much more now, and I care for them both, individually and as a pair. However, I’ll admit it, I am a huge Mac fan. Once again I may be atypical, as it’s awfully easy to empathise with Henry. But… Mac. When necessary, Mac utters the most perfect words.

There are characters who make you think – Stacy, Val – or make you hurt for them 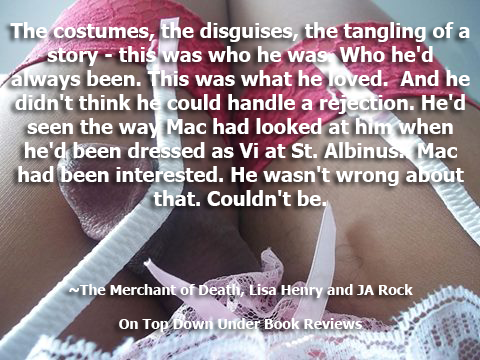 – Remy. Then there are those you want to hurt. No matter what, you feel something for everyone who crosses your path – like them, loathe them, or feel mistrustful of them. While not containing much sex, rightfully so, it has one of my most loved kinks in this book. Hot, Henry and Mac. H.O.T! But also meaningful.

This is a really good series. Lisa Henry and J.A Rock take you on a funny, sad, touching, touch ‘o’ kinky, crime-story journey, and they do it in such style. I am now moving on to Tempest because I have to know where the road leads for Mac ‘n’ Cheese. Highly recommended for those who like a mystery, complicated relationships, contemporary humour, and two polar-opposite MCs, with some interesting secondary characters littered throughout, plus real heart and soul.
5 Disguspressed Stars!

I love a good mystery, a bit of humor, and books that bring out all the characters for the reader – not just the mains. What a great review.

Love the quotes/GIFs, as always. 🙂

I love those things and, yes, it is a good series.

Thanks, Cindi. I like those quotes and I do love the 2nd one.. a whole lot.

Loved your review of this one Kazza, especially loved the cake quote. Sounds good enough to buy and get stuck into for a Sunday arve read.