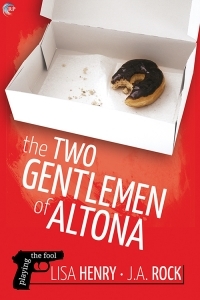 Special Agent Ryan “Mac” McGuinness is having a rough week. Not only is he on a new diet, but he’s also been tasked with keeping Henry Page—the world’s most irritating witness—alive. Which is tough when Mac’s a breath away from killing the Shakespeare-quoting, ethically-challenged, egg-obsessed Henry himself. Unless killing isn’t really what Mac wants to do to him.

Con man Henry Page prefers to keep his distance from the law . . . though he wouldn’t mind getting a little closer to uptight, handsome Agent McGuinness. As the sole witness to a mob hit, Henry’s a valuable asset to the FBI. But he’s got his own agenda, and it doesn’t involve testifying.

When evidence surfaces of a mole in the FBI office, Mac and Henry are forced to go into hiding. Holed up in a fishing cabin, they’re surprised to discover that their feelings run more than skin deep. But as the mob closes in, Henry has to make his escape. And Mac has to decide how far he’s willing to go to keep Henry by his side.

Mac is an FBI agent, he’s kind of an everyday thirty one year old – a bit of a paunch,

receding hairline, which he buzzes, and, under doctor’s orders, he’s recently cut back on sugar and carbs. Messing with stress-eating never does anyone any favours and  let’s put it this way, Mac’s not happy about decaf….or lack of donuts. Mac is also  somewhat disconnected from life in general – his family, co-workers, and  relationships/sex . The two things which yank Mac’s crank are the big bust of Jimmy Rasnick several years ago, the kind of case that makes your one-time (FBI) partner now a Special Agent in Charge. And an obsession about nailing mobster, Dean Maxfield. Funnily enough, the latter has now just (potentially) dropped into his lap courtesy of a con man staying with Maxfield’s Aunt Gloria. The con man  witnessed an FBI informant being shot in the head by Maxfield.

Toby Seacol – aka Henry Page, aka Sebastian Haynes – was scamming Gloria Maxfield for ‘tuition’ money for his supposed poetry/arts course. He had no idea she was the aunt of a mobster, so that was a bit remiss of him. After Pete is shot, Toby (Henry) calls the cops then passes himself off as Officer Falstaff and exits when Mac turns up to take over the case.

“You coming?”
“Left my phone in the car. I’ll catch up.”
Mac nodded at him, and he couldn’t help watching for a moment as Falstaff walked toward the street. Helpful guy. And a nice ass. Two of Mac’s favourite qualities.

This is Henry’s first of several escapes from Mac. The book is a series of Henry 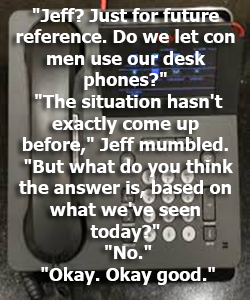 taking off and Mac bringing him back… most of the time. When under FBI protection, Henry manages to sweet-talk and con members of Mac’s team. He organises birthday cakes and all sorts of ‘entertaining’ situations, including using phones that are FBI property. What Mac lacks/has lost in interpersonal skills Henry seems to have picked up along the way, and then some.

When Henry takes off it allows the reader to see some of the other people in his life. People like  Remy, who helps Henry with his disguises and obviously means a lot to him, but is not without his own issues.

His left sleeve slid up. He tugged it back down, but not before Henry saw the tracks.
“You using again?”
Remy didn’t meet his gaze. “A bit.”

Then there’s Stacy, a den mother to more than a few fringe characters at her house known as the Court. It also allows the reader to learn a skerrick about Henry’s family… and a lot goes back to them, but you never see too much about any one person.

There’s some inner monologue, mostly from Henry, as well as Henry’s constant chatter about anything and everything. It’s part always being ‘on’ and finagling others, and it’s part white noise to hide who he really is and what bothers him. There are a couple of things that do bother him – thunder storms, Mac getting under his skin, worry over family and Remy, and other things that aren’t really fleshed out but obviously will be.

A little kid playing dress-up. Or a hero. Or a criminal. Depending on how you looked at him.

Mac has some moments to think when they go to his family cabin outside Altona. He decides to use it as a safe house to hide Henry from hit men and what appears to be an FBI leak. Some thoughtful moments, and the way Henry ends up being closer to his fellow work colleagues than Mac is, helps you see the detached person Mac has become. Mac is a good guy; he may be intense but he’s decent, law-abiding, solid. He also has a way of soothing Henry and letting things go that he learns along the way bother him. Of the two MCs, Mac was the one that kept me turning the pages the most, but I think I might be atypical.

The reason this book is 4 stars and not 5 is because I would have liked more on both men. More of a connection between them and I was frustrated with Henry running…. and the phone being answered at the worst possible times. Mac made some changes throughout and softened as the book progressed. I liked that. I know there is more to Henry but I need it because he would nearly get there for me then, like Mac, I lost my grip on him again.

I’ll be honest, when I first finished The Two Gentlemen of Altona I wasn’t sure how I felt so I slept on it for several days and reread quite a bit of it. It helped clarify how I felt/rated the book. The book is funny and snarky, a lot of people will love that 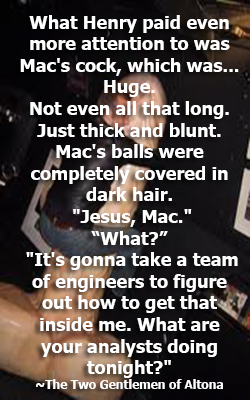 alone. The candy-consuming con man and the calorie-challenged FBI agent are interesting opposites. There are clever scenes, like the dealership and Henry telling Mac he runs with flappy-arms, and Stacy’s no-nonsense words. I also liked the touches of Shakespeare – I love the title, Henry’s names and other bits and pieces. The overall dialogue/banter was one of the best parts of the book, no matter who was talking. Even when Henry was being quite frustrating, and he could be, it was witty and sharp. Henry projects one way but he has some interesting baggage inside that noggin, he’s just good at being ‘on.’ Mac is wound up tight and I really want more insight into him. He’s a nice guy and I like nice guys finishing first. I’m pretty interested in how Lisa Henry and J A Rock will make that happen. I definitely want more chemistry built between Henry and Mac though, in my opinion it just isn’t quite on point yet. I realise there will be a build over a trilogy but I craved some more tension and action. For those who need a book neatly wrapped up by the end, know this book doesn’t deliver that. It’s a definite to be continued…

For the wit, for the interesting storyline and characters, the potential, and the overall quality of writing, I give The Two Gentlemen of Altona 4 Flappy-Arm Stars!

ARC received in return for an honest review.

This is a “Cindi” book if I’ve ever seen one, though I will admit to having a difficult time getting beyond the bad word at the top. Decaf? *shudder* 😀

I love a book with snarky humor and I can tell I’d be all over this one. Great review. I love the quotes and GIFs. I would totally hate Mac’s doctor too. Coffee. Donuts, Alcohol. 3 of my favorite things. lol

Yes, this IS definitely a Cindi book. It checks a heck a lot of your reading boxes. You really should read it.

I kept thinking of you with the whole Mac having to drink decaf thing and your horror over having to drink it. Of course, that’s all I can drink – long live decaf!?! 🙂 🙂