**Every comment on this blog tour enters you in a drawing for a choice of two eBooks off my backlist (as L.A. Witt or Lauren Gallagher; excludes Razor Wire) and a $10 Riptide Publishing store credit. Entries close at midnight, Eastern time, on December 28th, and winners will be announced on December 29th. Contest is NOT restricted to U.S. entries.** 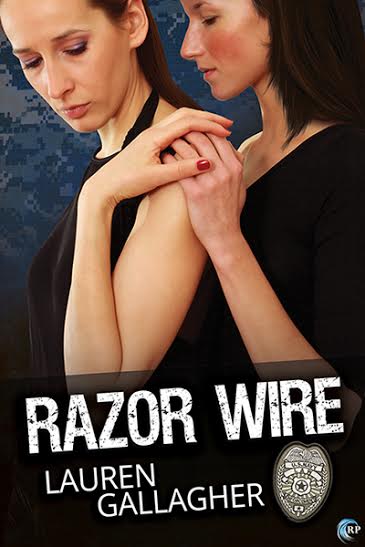 MA2 Reese Marion, a tough cop hiding her own trauma behind a hard-as-nails exterior, has no patience for pretty little princesses who use their cleavage to win favor with the guys. But when Reese is partnered with Kim, she slowly realizes that reputations can lie. Kim is whip-smart, ambitious—and scared. The man who attacked her won’t let anything damage his career, least of all Kim . . . or the baby she’s carrying as a result.

Isolated on Okinawa, thousands of miles away from home, the two women lean hard on each other. But when Kim confides in Reese, she unwittingly puts her new lover—and both of their careers—in the line of fire. Now her attacker just might have the leverage he needs to keep her quiet for good.

Lauren’s backlist is available on her website, and updates (as well as random thoughts and the odd snarky comment) can be found on her blog or on Twitter (@GallagherWitt).

It sounds so intense, but I know it will be good!

Sounds like an interesting read. Congrats on the new book =)

Congrats on the new book. It sounds like an interesting read.

A big congratulations on the newest release! Awesome post and love the blurb!