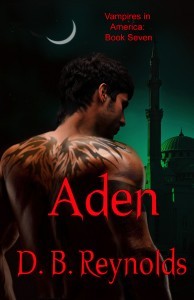 “Some women,” he murmured, his dark voice a burr of sound that rubbed along her every nerve, “want what’s not good for them.”

This time in the Vampires in America series, Aden – who came across as a tad arrogant and, well, a misogynist in Hunted: A Cyn & Raphael Novella gets his own book. Aden is in Chicago for the Challenge to be the next Vampire Lord of the Midwest.  Many of the vampires, and all of the lords, are gathered in Chicago for the Challenge – which is both very physical and also political in nature. The favourite to win is Aden, and it doesn’t hurt that he has some strong backers but he needs to deal with all comers wanting to take over from the original lord – the now deceased Klemens.

Sidonie Reid is the daughter of a print mogul  and she works as a reporter for her father’s paper. Rather than stay in the suburbs and report on pancake breakfasts and local basketball heroes, she lives in Chicago and is looking into meatier stories.  She has intel on a slave ring operation. One of the girls who has made it out, and is making good with her life, Janey, becomes a friend of sorts as well as helping Sidonie with her story on the slavers.  The problem is, Janey is murdered and this just strengthens Sidonie’s resolve to try to find those responsible for Janey’s death and those trafficking women. The people she is after include Vampires in what was Klemens’ territory.

Six months after Janey’s death, Sidonie has worked hard at infiltrating the local vampires with help from a Chicago professor, who seems to know a lot about secretive vampiric habits, and she’s been working hard on a vampire, Travis, to get invited to the gala before the upcoming Challenge. Aden is the word on everyone’s lips in regards to the likely successor of Klemens’ territory so she wants to meet him. The police haven’t cared for the women being sold into prostitution, maybe she can 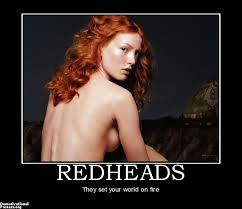 work something out with Aden.

Aden is powerful and charismatic and doesn’t trust easily, particularly women. He is the Sire of four children who form a tightknit and powerful group. Travis is one of them. Aden has not risen to where he is by not knowing as much as he can about his surroundings and the people who inhabit them. He also loves a redhead and he has known about Sidonie Reid’s interest in him before she even knew Aden was the main player to take over the Midwest. He is intrigued when he meets her and grows more intrigued as he gets to see her passion about slavery and righting what she considers to be an evil practice. Given her privileged background there is a naiveté about her, coupled with a passionate determination to do the right thing for women she doesn’t even know.

But Aden is primarily in Chicago for the Challenge and he has several primary challengers, including Silas a female vampire who was favoured by Klemens. Also, a major threat comes from a vampire from the Mexican Territory, Ramiro Salvador. While Salvador is arrogant in his belief he can win the territory, and fights his own battles, Silas likes to send her minions out to do her dirty work for her. She is certain she can weaken Aden by using up other vampires. But there is no chance of the latter occurring –

Extending his right hand, he slammed his fist directly into Stig’s chest and grabbed his heart. The organ thumped once against his palm, and Aden smiled absently at the sensation before closing his fist and squeezing until muscle and blood slithered between his fingers.

Stig’s final cry sang in his ears as he focused his power once more, and the heart burst into flame, becoming nothing more than ash snowing down to join the pile of clothes and dust that had been Stig Lakanen.

The protagonists worked well together in Aden because they had a common cause and their attraction was palpable. As the book progresses there are flashbacks to Aden’s past and why he feels like he does. That he was the bastard child of a wealthy Moroccan merchant and a Scottish-heritage mother. Why women have been less than important to him long-term, other than as a source of pleasure and blood.  The flashbacks were not long and did not detract from the story, they value-add to the believability of Aden and his desire to help Sidonie. To be with her.

Obviously a relationship is on the cards for Aden and Sidonie. Aden is going to find his mate, as this series is a romance. But it is also a paranormal/UF series. Aden was a leap back to the more UF roots that ViA started as and it was a bit darker than the last few in the series. And I loved that. Because of the Challenge Aden has to contend with a war-like situation while falling for Sidonie, and having to deal with the side issue of slavery on his potential new turf. So, there is plenty of action and someone is not playing by the rules.

The writing is strong here, and where I have criticised D B Reynolds for being a bit repetitive and missing some oral sex from the women on their vampires, Ms Reynolds really spiced it up. The chemistry between Aden and Sidonie is absolutely white-hot. I must say that Aden is an appreciator of a fine arse, even if that is the occasional slap and he definitely likes to hold it…amongst other things.

I love the vampires in this series. They are sexy and they are powerful – if you get in their way and you do not respect the rules, laws, and taboos they have, then you get shown no mercy whatsoever. There are degrees of strength and power within the vampires in their community and the world building of their powers, their abilities, and their backstories is excellent. To become a lord you really need to know how to not only develop your power but harness it until it is necessary to unleash it. You need to know how to play the political game –

From the depth of Aden’s power. a dark force lifted its head and scented death, demanding to be set free. Drawing on two centuries of discipline, Aden flexed his will and forced it down, unwilling to permit Silas’s spies to carry word of his true abilities back to their master.

And do not mess with their women –

When he found whoever was behind this, their life would become nothing but pain. They would live a very long time, and every moment of it would be spent learning what it meant to defy a vampire lord, to take from him the only woman in his entire long life that he’d ever cared for. The only woman who’d ever honestly cared for him.

The other thing I really like about this series is that the women can hold their own. Sidonie was no exception, she was determined, took no crap and knew what she wanted –

“But you didn’t wait anyway.”

She rolled her head from side to side. “I decided I was no fairy tale princess.”

Initially she viewed Aden as her bad-boy fling. She also openly embraced the pleasure that Aden could bring her, whether permanent or not. When it came to Aden being bloodthirsty, she was no shrinking violet. Aden and Sidonie are now my favourite couple behind Raphael and Cyn as there are real similarities – without being copies – between them. I would love to see more of them. I really hope D B Reynolds does give the readers more Aden and Sidonie.

A wonderful edition to the Vampires in America. Book #7 and still going strong, that says a lot about the care an author gives her characters and readers. I look forward to Vincent’s book next. Recommended for lovers of paranormal romance with an UF kicker and strong vampires, who don’t mind getting their hands bloody and who love strong, feminine women who love them right back.

“Have you ever  been bitten, Sidonie?” he asked, his mouth hovering above hers as he slid his hand around to caress her lower back, just above the curve of her ass. It was a light touch, but enough to hold her in place, enough to let her know she was his to control.

“Then answer me the same question. Why me?”

Sid looked up at him in surprise. This arrogant, confident, powerful creature…and he needed to ask her that? “You’re beautiful,” she said honestly.

“And so are you,” he crooned, and then he was kissing her…

I’ve waiting for this book! I love ALL the books in the series. Each one gets better than the one before. I love the strong male and female characters.

I couldn’t agree more with you, Wendy. The characters are terrific. I read a lot of paranormal and this is one of my absolute favourite series.

I know how much you enjoy this series so it’s good to see that it is still going strong at #7. I can tell I would like both Aden and Sidonie. Another great review. 🙂

Yes, still kicking arse at book 7 and the detailed plot is making sure that it will go for a while yet – yay!