Hunted: A Cyn and Raphael Novella (Vampires in America #6.5), D B Reynolds 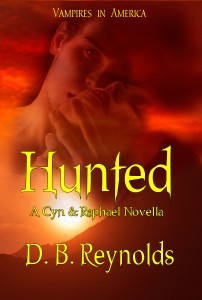 “But, Lucas,” he added, his voice going cold and deadly, “once that’s done, we’re going to find out who was after us and why. Because, if there’s to be a hunt, I intend to be the hunter, not the hunted.”

I do love this series. I eagerly await each new release and I devour them. Have done ever since I discovered the terrific Raphael. Why do I “devour” them? Because they are well written, the MC’s are always interesting and the women are generally very strong characters as well. These vampires are powerful and fierce, and they do not muck around with their opposition, they destroy them. There are interesting political machinations when they deal with one another and humans. Loyalty is expected and they are incredibly territorial. To top it all off, they are downright sexy.

I love Raphael and Cyn. They are one of my favourite couples of any genre of any time. I’m really enjoying that D B Reynolds has adopted this format of a novella between new books to give us more of Raphael and Cyn. It also helps introduce the new Vampire and his/her short backstory for the upcoming book. This approach to the series is working really well. I would be devastated if I didn’t get my Raphael and Cyn fix, but I don’t want them taking over the new vampire’s book when it comes out. So, they are kept in the mix, and there is a progression of the series all at once. Perfect. I hope D B Reynolds keeps this format up.

Hunted is about Raphael and Cyn on their way to Chicago for the council meeting and, primarily, for the competition/challenge  to take over that territory after Klemens was taken down in the last book, Lucas. They stop over in Lucas’ home of South Dakota on the way through. Lucas is one of Raphael’s children  and he is backing a particular candidate (Aden) as the new Lord for Klemens’ old territory. On the way to Lucas’ property they suspect they are followed. Starting off a chain of events. Several attempts are made on Lucas and his guests, which will not be allowed to stand – if Cyn is in harms way Raphael is one pissed off Vampire Lord. There is much to this novella, with reasons why territorial claims are going to be fought more intensely now and why some challengers might soon be stepping up to the plate. There could be challenges even when there isn’t a territory to be claimed. There is much potential for this series to diversify further.

In Hunted there are some ends tied up from the last book and Cyn and Katherine get some time to know one another, which is good. Cyn is recruiting members into the Mates Club for the partners of  Vampire Lords, where they can roll their eyes and have a mutual discussion about what it is like to be mated to them  – and not all the mates are female. Cyn also gets to use her PI skills and investigate who is behind these attempts in Hunted. She also sets Aden on the way to (maybe) having some respect and upgraded ideas about the value of a female, outside the bedroom.  Oh yes, Aden is going to be one interesting read because he appears to be a card-carrying misogynist, but you know that will all change. I am so hoping for one strong gal to bag this Vampire Lord in-the-making – he has to win the challenge first.

He kissed her then, his lips moving over hers in a sensuous caress as he pressed his hips between her thighs. There was no foreplay, no preparation, just his cock, familiar in its weight and thickness, in the velvet stroke of it as he pushed deep inside her with a single thrust. She was wet and ready for him, had been ready from the moment he’d rolled her beneath him.

She hungered for him always, for his touch, his heat, the spark of silver in his eyes, the deep growl of his voice. “I love you,” she whispered, as he plunged between her legs harder and faster until they tumbled over the edge of ecstasy together, their passion a searing heat that entwined their fates forever. “I am yours, “Raphael rasped against her ear. “Always, lubimaya. Always.”

Cyn gets to do her thing, and Raphael gives her a bit more latitude. But they bounce of each other deliciously as they are strong personalities in their own right. Cyn also learns more about  Raphael and the political aspects of all things vampire.

I mostly read in the LGBTQ genre these days, but I never miss this series. I think that sums up the value I place on the writing of Vampires in America – the characterisations, the plots, the passion, the strong world building. It is also why I recommend this series to all paranormal lovers across the board. This novella was a good read in every way – action, intrigue, humour, romantic and sexy.