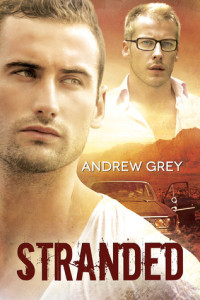 This book is a huge difference from what one would expect from Andrew Grey.  That’s not a bad thing by any means.  I always think it’s a good thing when an author is willing to take chances and step away from his or her norm.  If you’ve read Andrew Grey before you know to expect the love story and the happily-ever-after. That’s a given, right?  But do you also expect to see quite a bit of intrigue and suspense? Sometimes maybe but not like Stranded.  This is my eighth by this author and I can say that it is much different from the seven I’ve read before it. Oh, the love story is there (would it be an Andrew Grey book without it?) but there is so much more to this story than just a love story.

Kendall Monroe is a popular Broadway actor. He has just completed the best run of his career when his latest show closes due to bad planning by the higher-ups.  For the first time in years he is not rushing to rehearsals or performances. He has been with his partner, Johnny Harker, for ten years and wrongly assumes that his free time will be spent with the man he loves. Johnny is a famous mystery author and can’t quite get used to having Kendall at home while he’s trying to write the next great novel.  He is famous in his own right with several books on the best seller list.  When Kendall is given a chance to do a movie in Hollywood he weighs the options but in the end decides to go for it. Johnny is not exactly jumping to spend time with him so why not? Kendall is not fooled into thinking that the once great relationship is still on even footing but he chooses to pretend all is well and turn his cheek because sometimes one doesn’t want to know the truth. He takes off to Hollywood with Johnny’s blessing and begins a very grueling filming schedule. The director is a jerk but Kendall quickly puts him in his place and becomes respected as a result.  The assistant of another assistant (Juan) hits on him but later becomes an ally and a good friend. The lead female actress in the movie acts more like a spoiled teenage prom queen than a trained actor but she eventually comes around.  Kendall is no fool, having dealt with some of the worst of the worst during his Broadway career so he quickly puts those who consider him a naive boy from New York in their place.

Things are going well for Kendall on the filming front until certain things start to happen.  One, there’s the distance between him and Johnny and Kendall is convinced that Johnny is having an affair (all the signs are there).  Two, there is a stalker who has set his/her sights on Kendall. Johnny, who was once loving and sweet, has taken a major step back from Kendall so Kendall is constantly worried that there will not be a relationship to go home to once the filming is complete. Someone on the film crew is sending creepy messages and flowers so he has that to deal with on top of his relationship issues.  The messages and flowers are only an annoyance until the stalker takes things too far.  One instance is something that happens with his dressing room and another is so major that it almost costs Kendall his life.

There is a slow build up in this story.  It begins with Kendall’s Broadway show closing and the reader getting a glimpse of his early relationship with Johnny. When Kendall goes to Hollywood to begin filming the movie, there is more build up that involves flashbacks to his and Johnny’s earlier days, among other things.  While I’m all about a good build up in stories at times I was thinking that it was going a bit too far. 50% into the book and I was waiting for something to happen other than the flashbacks and the filming.  I will be the first to complain about flashbacks in books.  I hate them.  I seriously hate them.  At times they work but not when they are happening every few pages.  By the time I got to the 50% mark I admit to being extremely frustrated with seeing all of them in regards to Kendall and Johnny’s earlier relationship. But then things started to happen and I realized that the story as a whole would not have worked without them.  The reader is able to get a big look at the Johnny of days gone by… and this is not the Johnny of the here and now.  You are literally looking at two different people. I constantly found myself wondering “is he?” or “isn’t he?” with Johnny. I was not sure until long into the book. However, Johnny either proves his worth or shows what kind of a bastard he truly is toward the 60% mark on my Kindle. I refuse to type a spoiler of what happens there.

Kendall is extremely claustrophobic. This claustrophobia almost prevented him from accepting the role in the movie Stranded.  There is a scene that involves him being handcuffed to a steering wheel inside of a car in the middle of nowhere in the desert.  Granted, there will be a film crew all around him during the filming but his fear is very real and he wants to get the scene over and done with, film crew or no film crew. But what happens when his stalker takes things too far once the filming of that scene is over?  Flowers and notes have been delivered all over the place and the stalker’s behavior is quickly escalating.  No longer is the person just leaving flowers but he has begun to go in a more dangerous direction.  He wants Kendall and nothing will keep him from either having him or making sure that no one else can.  Kendall tries discussing this with Johnny but Johnny is not taking him seriously.  Keep in mind that Johnny is in New York while Kendall is hundreds of miles away in Hollywood and with every call Kendall is convinced that Johnny is moving away from him and the long-term relationship. Suddenly, life is imitating art or is it all part of the movie? Kendall has been handcuffed to a steering wheel in the middle of the desert inside of a locked car.  His claustrophobia has kicked in and not only that, but he is literally on the verge of death if he is not rescued soon.

There is so much more I can say about this book but I refuse to.  If I go into what happens after Kendall gets locked in the car it will give the entire story away and again, I refuse to do that. The question is where does Kendall go once he is rescued?  Do he and Johnny go back to the same bland existence or do they move on away from each other or maybe, just maybe, find what they had before?  Does Kendall continue with movies or does he go back to his real love, Broadway?

I admit to complaining about the flashbacks early in the book, as I said. I shy away from books that suggest they may have them because I feel that it distracts from the story if I am one minute in the now and then instantly thrust back several years earlier. But with this story, it would not have worked without them.  I had a hard time reconciling the sweet and kind Johnny to the one years later.  I did not like him at all, though the author did an outstanding job making it look as if they were two totally different people.  I liked Kendall immediately and continued to as the story played out even if I didn’t agree with a few things he did (or didn’t do) early on as far as his relationship was concerned.  Ten years with a man you would expect there to be an open line of communication and instead of taking a step back you would expect there to be discussions about concerns and questions.  I will, however, say that I ended this book very pleased with the outcome.

There is an amazing set of secondary characters who play a huge part in the story, from the bitch actress to the Australian director (who tends to lose his accent quite a bit) to the stalker, among others.  I had an idea early on who the stalker was and it turned out that I was correct. Don’t get me wrong, Andrew Grey did a great job in making the reader believe one thing when in reality it was something else.

All in all I will say that this is a very good book.  I mentioned the slow build and I even mentioned my thinking at times that it was too slow early on.  However, the slow build up was necessary for this reader to get where she needed to be when everything else played out later. There is a lot of guessing and questioning what is right there in front of you. Kudos to the author for having me convinced one thing was about to happen when in reality it was going in an entirely different direction.  The time Kendall spent in the car locked up was written brilliantly. I am extremely claustrophobic myself and I could so sympathize with the character and what he was going through. Normally I’m not a fan of books with established relationships and I will say that I never really felt any love for Johnny with the exception of the Johnny I saw in the flashbacks. That Johnny was a great person who would do anything for the man he loved.  The question is whether that man can ever be found again after so much time and distance.  You would have to read the book to find out.

If you are looking for a typical and sappy romance go somewhere else.  While the sappiness and sweetness is in Stranded, it is more about the suspense and discovering what is or what isn’t there right in front of you. Sometimes what you hope for is not in the cards and sometimes it is. Sometimes it takes an almost tragedy for the right thing to happen in the end.  I loved the way this book ended and I can’t compliment the author enough for stepping a little outside his norm.  As always, I will be eager to see what he puts out next.

I’ve always had a thing for men wearing glasses so I adore the cover.