I’d like to thank On Top Down Under Book Reviews for giving me the opportunity to share an exclusive excerpt of my latest release, Yesterday. This novel is a period piece set during the tumultuous last days of the Pahlavi dynasty. The time and place aren’t conducive to romance, especially between two men, but love and logic aren’t always compatible as Kamran and Grady soon find out. Can a chance meeting alter one’s destiny? The answers are revealed within the pages of Yesterday.

The striking cover was designed by multitalented author and cover artist Catt Ford. Aside from the giveaways, which are listed on the Rafflecopter widget, I bring an exclusive excerpt. I hope you enjoy a glimpse into the world of Prince Kamran Izadi and Grady Ormond. 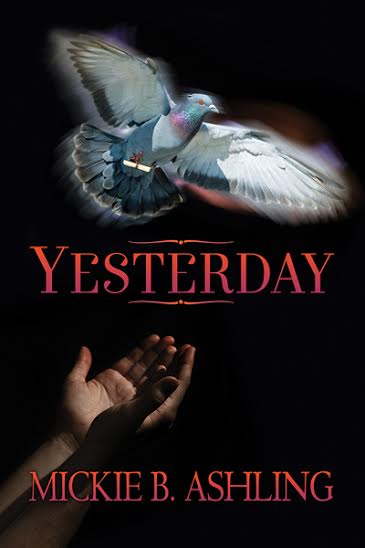 On their first night in Karachi, his father hosts a cocktail party to meet the local dignitaries. Grady is introduced to His Highness Prince Kamran Izadi, nephew of the Shah of Iran. Twenty-three-year-old Kamran has recently returned from the UK, where he spent eleven years, first as a student, and then as a financial analyst.

Kamran was in riding gear when he picked me up the next day. He was waiting for me in the lobby, looking ruggedly handsome in khaki jodhpurs and a maroon blazer over his unbuttoned beige polo shirt. He’d pulled his hair back into some sort of knot at the base of his neck, and it made him look older and less approachable. There were no traces of the thoughtful man I’d spent time with the previous day, and I was starting to realize that he could step into the different roles in his life quite seamlessly.

He was obviously great at compartmentalizing, something I’d always found difficult. The warmth in his eyes as he sized me up was reassuring, though, and when we were settled in the backseat of the car, my impressions regarding his orientation were solidified upon hearing him mention how my blue silk tie complemented my eyes. A regular bloke wouldn’t care, much less bring it up in a conversation.

The ever-present bodyguards were a deterrent to any sort of flirtatious comeback on my part, and although they were up front, serving dual roles as chauffeur and watchful companion, they’d hear our conversation, so I merely smiled.

“Have you been to a polo match before?” Kamran asked.

“I’ll join you as soon as the game ends, and we’ll have dinner at the club.”

“That sounds good. I’m sure I’ll find someone to chat with while I’m alone.”

“No doubt. You seem very relaxed with strangers.”

“It’s my nomadic upbringing,” I explained. “Being thrust into a new environment every few years will either turn you into a horrible recluse or a confident partygoer. Fortunately, I’m the latter. Meeting new people never bothers me.”

“I, on the other hand, shrink away from strangers.”

“You didn’t have any trouble befriending me the other night,” I reminded him.

“You’re right,” he agreed. “There was something about you that set me at ease almost immediately.”

“Why, thank you, my prince.” As soon as I realized I’d used the possessive pronoun, I wanted to take it back. Then again, why? I was reading too much into my conversations with Kamran and had to stop second-guessing myself. He smiled, which I took as a good sign.

“Would you care to give me some pointers so I can learn to relax in a crowd?”

“Here’s the way I see it,” I stated, turning sideways to look at him directly. “There’s nothing worse than being alone at a party. Single guests are so relieved to be approached they usually open up and tell me their life story. Most people hate to be ignored.”

“You’re very sociable, like your father. You should be a diplomat, Grady, not a cinematographer.”

“Why not?” Kamran asked in amusement. “Most boys want to grow up to be just like their fathers.”

“I would never make it as a diplomat,” I admitted. “I’m too inquisitive and can’t keep my opinions under wraps. I would die of verbal constipation.”

Kamran burst out laughing. “You probably would,” he said, pulling out a snowy handkerchief to dab his eyes.

Grinning, I added, “I’d rather stick my foot in my mouth than hold my tongue.”

“Feel free to speak your mind around me,” Kamran said.

“I almost got my lights punched out yesterday when I did.”

“My query about—boyfriends,” I whispered, looking warily at the goons in the front seat. I knew I shouldn’t have brought it up again, but the not knowing if he was or wasn’t was killing me.

I nodded. “Would you be terribly offended if I called you Kam?”

“What does everyone call you in Iran?”

“It’s another word for prince in Persian, but it’s only used to indicate descent to the royal family in the second generation through the female line.”

Jan. 26 – On Top Down Under Book Reviews

Thank you to Mickie B. Ashling for stopping by during the Yesterday blog tour and for the great excerpt and giveaway!

Well… it’s one hell of an eventful period in time for a gay romance to be set. The retro/historical aspects are ‘colourful’ as well. Yesterday sounds really interesting.

Thank you Cindi and Kazza for giving me this opportunity to share a snippet of my novel. My inspiration comes from an old photo I unearthed during a recent move. I lived in Karachi very briefly decades ago, and my muse mashed up memories and history into this intriguing novel of forbidden love. I hope you’ll have an opportunity to read it some time in the future.

Hi, Mickie. 🙂 I’m actually reading the book now. The real world intruded so I allowed myself to get behind on pretty much everything. I remember that part of our history very well. It’s interesting reading about it in a fictional setting.

I can sympathize with real life issues that derail the best of plans. I’m still playing catch-up from the holiday madness.

Thanks for another interesting excerpt. Sounds like Grady and Kamran are going to need to talk in code with those bodyguards around.

Another great excerpt! I love the interaction between the two of them. These sneak peaks are contagious, I want more.

I loved the excerpt. Thank you! I both satisfies me and leaves me wanting to read more!

Thank you for another great excerpt! I’m really looking forward to checking this out.

I enjoyed the excerpt Kam’s life is so very different from Grady’s no wonder he makes the odd slip.

I cringed when Grady mentioned boyfriends in front of the bodyguards. He needs to be more careful. Thanks for another excerpt and chance.

I loved the excerpt. I don’t always read historical books but this sounds interesting, and a prince too! Thank you. 😀

Another great post. Thank you for the excerpt. Congratulations on the release!

Thanks for this post and for sharing an excerpt.

Thanks for the giveaway! Looking forward to reading your newest book…

I love reading about cultures I’m not that familiar with – it’s always great finding out something new…Thanks for the giveaway!