We Met In Dreams, Rowan McAllister 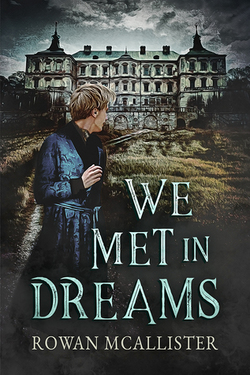 In Victorian London, during a prolonged and pernicious fog, fantasy and reality are about to collide—at least in one man’s troubled mind.

A childhood fever left Arthur Middleton, Viscount Campden, seeing and hearing things no one else does, afraid of the world outside, and unable to function as a true peer of the realm. To protect him from himself—and to protect others from him—he spends his days heavily medicated and locked in his rooms, and his nights in darkness and solitude, tormented by visions, until a stranger appears.

This apparition is different. Fox says he’s a thief and not an entirely good sort of man, yet he returns night after night to ease Arthur’s loneliness without asking for anything in return. Fox might be the key that sets Arthur free, or he might deliver the final blow to Arthur’s tenuous grasp on sanity. Either way, real or imaginary, Arthur needs him too much to care.

Fox is only one of the many secrets and specters haunting Campden House, and Arthur will have to face them all in order to live the life of his dreams.

Twenty-four-year-old Arthur Middleton, aka Viscount Campden, has been living locked in his rooms at Campden House for a decade. He doesn’t feel like he’s being held as a prisoner because he’s well fed, well taken care of, and he has the finest of everything. He also knows it’s for his own good. He has his sketch books and his novels and really never wants for anything – except human companionship. Outside of staff anyway. Every so often he gets visits from his Uncle Oscar and he’s allowed to meet him downstairs for a little while. He’s not stepped outside of his home since he was fourteen.

How pathetic was I that I was willing to get on my knees and beg a figment of my own imagination not to leave me alone?

Arthur has anxiety and hallucinations as a result of a childhood fever. He sees and hears things that nobody else can. He’s kept in his rooms for his own safety and that of others, per doctor’s orders. He’s lonely but he accepts his life because he knows that his uncle only wants what’s best for him. It may sound like that’s not the case – who would keep their nephew locked up for a decade? – but it really is. Oscar truly loves Arthur and only wants to protect him. Unfortunately, Arthur’s doctor over medicates him instead of trying new treatments. I didn’t like the doctor and that didn’t change the more I read. If Arthur got a little anxious, he was given a bigger dose of Laudanum, Dr. Payne’s drug of choice. If he had trouble sleeping, more Laudanum. If he had a stomach ache – you guessed it – even more Laudanum. If Arthur questioned his care or did anything other than act like a good little boy he was given more meds.

There’s also Pendel, Arthur’s longtime butler, who sees to his every need, as well as Tom and Sarah, the maid. Sarah was pretty much in the background. Tom, I never could get a read on and I was a little confused about him toward the end. Pendel, while a bit stiff and formal, was good to Arthur.

One night Arthur is visited by a new ‘apparition’ who calls himself Fox. Fox is an older male with silver hair – his actual age was never given that I recall. Arthur believes he’s seeing someone else created by his mind so he interacts with him. Fox is a thief and more than a little surprised when he stumbles upon Arthur while trying to hide after sneaking into the big house. Instead of taking off he and the younger man strike up a conversation. By the time he leaves he has promised to return. And he does, many times. A friendship slowly develops between Arthur and Fox that eventually turns into much more. Arthur is innocent but Fox has been around the block a time or three. Fox does more than ease Arthur’s loneliness and take away his innocence. He helps him in other ways. The more they talk the more Fox insists that perhaps Arthur isn’t quite as ill as he and his family believe. He helps him gain confidence that he’s never had so that he can discuss his care with his uncle.

“Would it be such a terrible thing if I weren’t, in fact, a figment of your imagination… if I were a real, flesh-and-blood man?”

Still convinced that Fox is an apparition he’s able to open up in ways he never could with an actual person.

I adored Arthur. He’d merely existed until Fox came into his world. I adored Fox too. He wanted Arthur to believe that he was this rugged bad guy when in reality he had a heart of gold. Their sexual relationship didn’t happen overnight. It was a slow build that allowed the reader to watch Arthur open up and become comfortable little by little. The sex scenes were written very well and with a lot of sensitivity for Arthur. Fox was very patient and never pushed.

Eventually Arthur, with Fox’s secret help, gets more bold with his uncle. He insists that he’s never going to get well if Dr. Payne isn’t willing to try new treatments. The Laudanum knocks him out for several hours at a time. How is this helping him? Unfortunately, when he’s finally making good progress with his mental health he discovers something that pushes him backwards in his healing. My heart broke and I just wanted to hug him. Thankfully Fox was there. Fox was always there. That is, until suddenly one day he wasn’t. A few things occur in the story that led to it and anything I say beyond that would be too telling.

I have debated on how to rate this since I finished it. I even went back and read the final chapter again in hopes of having an A ha! moment. I didn’t. Have an A ha! moment, I mean. This was a solid 5 star read. The writing is beautiful. The story is beautiful. I absolutely loved watching Arthur and Fox come together first as friends and then as lovers.

“I’ve missed you too, Arthur. You are a ray of sunshine in a dreary world.” His smile grew wry, and his eyes glinted devilishly as he continued, “My very own angel in the tower.”

The two guys get their HEA. Or as happily-ever-after as two men can get in Victorian London anyway. I just wish more would’ve been added to the ending. Everything came together fine but I would’ve loved to have seen a few more pages added and some things elaborated on. There was another niggle I had but it’s a major spoiler so I can’t say what it is. It may not bother anybody else. It’s one of those “it’s me, not you” things – something I’m not a fan of in books. Even though it really makes sense to the story as a whole, I’m just not sure how I feel about it, hence the 4.5 instead of 5 stars.

Overall, this is a beautifully written story about two very different men. There’s even a little paranormal thrown in. I got really sad and angry on Arthur’s behalf but I also smiled a lot. There were even a few “Aww!” happy tears. This is one of those books that I didn’t want to put down even for a few minutes. I don’t normally read historical romance books but I’m so glad I read this. I believe this is my first read by Rowan McAllister. I look forward to checking out more.

I was waiting for your review of this one because I knew you loved it but you were unsure of a couple of things. I also know you don’t generally read historical romance so that spoke volumes to me about how good the book is.

It’s such a lovely title, every time I’d pass it in draft I would be reminded.

I love your review and the quotes, especially the last one, and that GIF is gorgeous. Breakfast and a Cindi review, ahhh 🙂

My original first paragraph (that I ended up removing) said something about how I’m sure my blog partner was shocked when I said I was eager to read a historical romance. 🙂 You know me well.

This was such an amazing book. I adored Arthur and Fox so much. The things I was iffy about probably aren’t even that major but they were enough to stick with me as I was typing the review.

I love the title too. The lantern is very significant in the story. When I saw this GIF I knew I’d be using it.

Haha! That made me chuckle, John. 🙂