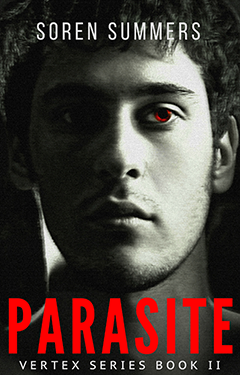 It’s been one hundred and forty-five days since the world ended. Paragon has swept through the city of Pleasance like a reaper’s scythe. Now the dead walk the earth, seeking the flesh of the living. Still Jarod Samuels refuses to die.

As a hunter, Jarod safeguards the Hive, the ruined mall he calls home. He exterminates zombies to protect the city’s last few survivors, and to keep Gabriel Anderson unharmed, their lives intertwined now more than ever.
But in a city ravaged by Vertex’s corruption, there’s no telling what dangers each day will bring, whether the threats within the Hive’s walls might be deadlier than those without – or whether monsters from the past still lurk and linger in the city’s shadows.
.
SPOILER REVIEW IF YOU HAVEN’T READ MONSTER
.
Review:
.
The betterment of mankind.
.
Parasite continues Jarod Samuels and Gabriel Anderson’s story after they hightailed it out of Vertex in Monster.  After Robbie, patient zero, was given Paragon and things went to Hell. While they hit the road to get out of Pleasance, maybe go to Canada, Jarod and Gabriel found themselves stuck in town. Vertex had roadblocks and mercenaries in place and things became chaotic as the initial fallout from Paragon spread. When bullets flew as people became infected, and people dropped, Jarod and Gabriel headed to the tallest building in town, the North Pleasance Mall.
.
Five months later and they’re still holed up in the shopping centre, the whole area turned into post apocalyptic

chaos with undead everywhere. Interestingly, the guys still seem to be doing what they did at Vertex, something they know well, particularly Jarod, they’re cleaning up. Only this time clean up means bashing in zombies brains and making sure wrigglers are beaten just one or ten more times because you can’t have semi-deactivated zombies chomping on you either. The zombies seem pretty stock standard. If they bite you you’ll die, rot, and come back as the brain fried undead. If they scratch you, it’s more of a festering wound and not necessarily a death sentence. It’s the venom from their bite that works it’s dark magic. They are primal, and they are hungry for human fresh. As the story unfolds though, the undead evolve with purpose-driven, nefarious intent and psychological ramifications.
.
The mall is named the Hive because there’s always activity going on, whether it be the queen of the Hive, Esther Prime, buzzing about making sure people understand all their lives are on the line, that teamwork equals the best chance of

survival. Or the engineers making sure there are no breaches of barricades, patching them up as necessary. The scavs seeking out food and useful supplies, and hunters running errands and taking out zombies. There are also children, they live on the top levels and play on the equipment that was installed in the upscale mall before Paragon. Then there’s Danny who was in his last year of med school when the world crumbled, who tries to raise crops on the mall roof, alongside the kids play equipment, as well as tending to the wounded. There are seventy people living in the Hive and people have a shop allocated as their living quarters in the seven storey mall, and everyone has a story. Jarod and Gabriel don’t want anyone to know their story and everyone else is too busy surviving to fully enlarge on theirs.
.
Nobody knows what she did, or much of anything else about her. Not her previous occupation, not her family, nothing. There’s a lot of questions, really, not just about Magpie, but about everyone in the Hive.
.
Jarod and Gabriel’s relationship has become more intense in Parasite, it’s a natural progression anyway, but 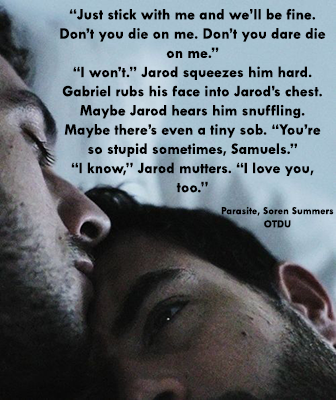 it’s aided by the fact that only they know how things began… or ended. Jarod feels guilt and when he thinks too long about something or someone, and he lost a few someones when Paragon was unleashed, he zones out with worry. What will people in the Hive think if they know he and Gabriel were there in the lab at Vertex at the beginning? Will they turn them out of the mall and make them run? Because people who cause problems in the Hive are turned out to zombie-infested Pleasance, complete with a flare gun ceremony. It’s also interesting that the older woman who ran the arms department at Vertex is the unchallenged leader of the Hive. Esther Prime doesn’t know what Jarod and Gabriel know but none of them mentions Vertex to each other or the rest of the people around them.
.
On one run outside the mall, the zombies start hissing, this hissing develops into Ssssamuels with all undead eyes on Jarod. How do they know his name and why are they acting like a thinking collective? This is bad, as in Zombie ire bad. As in drawing Hive suspicion onto him as an ex Vertex employee bad. Does this have something to do with Magpie noticing one of the brains they recently pulped is fairly pink and healthy looking? How does that happen when decay has been the norm for months and months?
.
Apart from the dystopia of the ironically named Pleasance all around them, the bloody action when they fight zombies, there are deftly handled interpersonal connections and relationships which make for a strong arc flowing through the series. Whether that be Jarod with Magpie, Esther and Danny, or Jarod not liking Gabriel’s hunting mate, Tyler, and Tyler’s unusual interactions with Danny. Jarod also has understandable dismay at human nature sometimes rearing its ugly head. And, at the heart of the series, Jarod and Gabriel still have a quirky, strong, interesting, smoldering and intensely desperate quality to their love, perfectly drawn for the times and these young men.
.
Gabriel is easily and effortlessly liked by everyone in the Hive, his thousand watt smile and 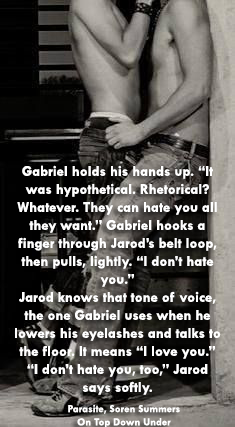 outgoing, YOLO attitude attracts both adults and children to him like moths to a flame. When it comes to Jarod though, the YOLO attitude isn’t there. When everything hit the fan after Vertex initially burned, Gabriel made Jarod promise him not to die, and he makes sure to request the same thing over and over from Jarod, all while Gabriel willingly throws himself into a horde of zombies with his weapon of choice.
.
Never an extrovert, Jarod still has doubts and insecurities. As Vertex-like as this new environment is, it’s uncomfortable and the new Pleasance is awful, he feels the echoes of people he knew in the mall shops all around him. He feels the majority of the Hive don’t like him, and some of it’s well founded, some of it’s because of guilt. However, the people who are the most genuine always gravitate to Jarod, and I like his friends, but along with the good comes the chilling attention of the public face of Vertex, Jonathon Hargove, and doesn’t that add a whole extra freaky little dimension to the series. He has a cameo in all the books and he is a scene stealer. Every time he’s on page in each book you learn more, and yet, paradoxically, that helps him remain eerily enigmatic.
.
God, this is such a good book. Such a good series. The main characters are my crack, I adore Jarod and Gabriel. The secondaries are also fantastic – some are not so easy to like and yet you still do, which is good writing. Soren Summers also creates strong female secondary characters, all of them straight shooters, tough and favourites of mine – I really liked Nessa in Monster but I have major character-love for Tabitha Wexler – Smolder, and Esther Prime and Magpie this time around.
.
Overall:
.
I can’t recommend the Vertex series highly enough. I’m grateful to writers like Soren Summers who bravely step outside standard romance and give me (gay) characters with arcs and plots I can bite into and lose myself in. This series is clever, subtle, entertaining. Yes, there is horror, say zombies, but nothing is forced, it’s neither too heavy nor is it lightweight. It’s a perfect balance. Once again only Jarod has a POV, but you still know how others are feeling because of the quality of the writing. The atmosphere is palpable and transports you, the exceptional dialogue, body

language, exploration of the human condition, combined with humour, the superb plot, another slow burn to intimacy, and a strong primary relationship all make certain you know what’s happening and reels you in.
.
Seriously, if you like the sound of this series don’t hesitate or bypass it, pick it up and read it. While Smolder lies in between, different town and MCs who I suspect are going to meet up, and won’t that be something else, Parasite is technically book #2 after Monster. Every book written in the Vertex world thus far is a gem and the high average ratings on Goodreads backs this up. These books were meant to be read, and read by many, so grab your tickets on the Vertex train and join me for one hell of a ride. 5 Hissing Stars!

This looks like such a great series. Like I said on your Goodreads review, I know how hesitant you were about Parasite. You were SO eager to read it yet you were scared to as well. I can tell that it definitely lived up to the first book.

Fantastic review. I love all the visuals but that last one is awesomely (lol) creepy. 😉

Oh how I love this series. I’m sitting here rocking back and forth like a mad woman waiting for the next book, wondering where it will go and who I will see – true addiction, I mean, uh, dedication. And as I type this there’s a Magpie outside having a crazy bath in my birdbath, singing to me. Sign of some description? Maybe not but, hey, I’m rocking, so… lol? Thanks, Cindi. I love that last GIF and, because I’m a bad person, the chicken nugget one – you know me and kids in books. I’m getting you involved in… Read more »

I’m with Cindi on this, I adored the images but especially the last one. Seems so familiar. Not a Silent Hill or Resident Evil movie is it? Is it the Ring remake? Or a video game? So badass. But that’s not the point. Thank you so, so much for this review. Like I tweeted you the other day, I love how you distilled the boys’ dynamic into a simple little line. And I appreciate that you enjoyed the female characters! Strong women have been a huge part of shaping who I am as a human being (I promise, I’m human,… Read more »

You know your VG/movies, it is Silent Hill. Isn’t it awesome? Which suits Parasite so much.

You’re very welcome for the review, I didn’t want to spoil anything because people need to enjoy it for themselves. I’m grateful for this excellent series, so thank you in return. Good books, worlds, characters, including some kick-arse old ladies, is what reading is all about 🙂

Ha ha, my crazy mind thanks the filthy cesspool that is your heart.

great review Kazza, it was such an awesome book

Thanks, Paul. It’s so, so good. This overall series is brilliant and I can’t wait for the next book.