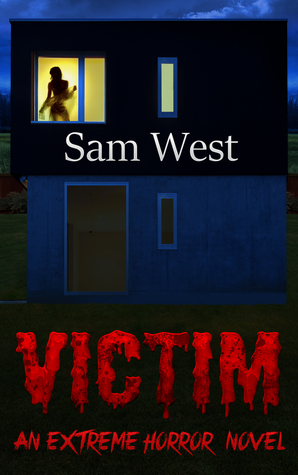 It was meant to be a night of new beginnings, instead it was a massacre…

The night Chloe Fox met her fiancé’s parents for the first time was the night her life changed forever. Instead of a quiet night in getting to know her future in-laws, she ended up the sole survivor of a grisly home invasion.

Now, one year on, Chloe is getting her life back together, the events of that fateful night no more than a horrific memory. She even has a new boyfriend who has asked her to marry him.

But Chloe’s dark past is about to catch up with her. She thought the killer was dead. She was wrong. He’s back to finish what he started.

He’s back for the girl that got away…

This in an extreme horror novel with a shocking twist. It contains strong scenes of violence, sex and gore and is not recommended for readers who are easily offended.

The first thing I’m going to say in this review is to heed the warnings in the blurb. Victim is extremely violent and contains scenes that might disturb some readers. The violent scenes are very graphic and some include sexual violence. Seriously, don’t pick this book up if those types of scenes bother you. If you’re a horror reader, you’ll enjoy it. If not, do the author a favor and read another book.

Greg and Chloe seem to be a happy enough couple. They’ve only been together for 5 months but he’s already asked her to marry him. They met, fell in love quick, and decided to make their commitment a permanent one. Greg doesn’t know a lot about Chloe’s past but he knows enough. Chloe experienced something horrific a year prior but he’s not aware of all the details.

One day Chloe leaves her diary out in the open while she takes a shower. Greg, being curious, opens it and starts reading. He knows he shouldn’t but the first page tells him that if he keeps reading he’ll finally find out what happened that night when her former fiancé Scott and his parents were killed in front of her. What he gets is a detailed and disturbing account of the events. By the time he’s caught reading the diary by his fiancée he’s sorry he ever turned the first page. Instead of being angry, Chloe encourages him to keep reading. Chloe is an extreme horror author and her therapist supposedly encouraged her to write down the events of the tragedy for therapeutic purposes. What Greg is reading looks like a fictional account of what transpired, almost like one of her horror novels. By the time he reaches the end he’s sickened by what Chloe experienced that night. She was the only survivor of the attack.

After Greg reads the diary things start to get weird. He loves Chloe but he’s so disturbed by what he read that he’s having a hard time coming to terms with it. Not necessarily with what happened – he gets that it was a horrible thing for her to experience – but by Chloe herself. She seems… off. Or maybe it’s just his imagination and he’s seeing things that aren’t there. Either way he’s spooked. It doesn’t help that Chloe is starting to receive threatening messages from either the man who killed Scott and his family or a copycat. Surely the killer died that night? Or maybe he didn’t. Greg just knows that he’s not only scared for Chloe but for himself as well. When things start happening in the coming days that spook Greg even more he starts to question everything he knows about the woman he loves. Or maybe he’s just losing his mind? You’ll have to read the story to find out.

There are other characters introduced who are also important but anything I say about them will give the story away.

Before this one, I’ve read one story by Sam West, Djinn, another extreme horror novel. I’ve been reading horror since I was way too young to be doing it, but Djinn is the only book to ever truly gross me out. I obviously enjoyed it, but it was a bit more hardcore than Victim. It needs to be stressed again that this book will not be for everybody. Don’t go into it looking for a mild story or a romance.

Overall, another very good story by Sam West. I cringed a few times and I admit to being nervous about turning the page a time or two. While I can’t say I completely saw the ending coming, I had an idea of how the story would play out and I was correct. Don’t take that to mean it was predictable. It definitely wasn’t. There’s a nice twist thrown in that also added to the story. There’s a lot more I could say about this book but it would all be too telling so I’ll stop here.

Highly recommended if you’re a fan of horror and don’t mind all the warnings I’ve thrown out in this review.

Great review, Cindi. Love those GIFS. Nice to wake up to one of your reviews and have breakfast while I read, horror or not :). I know how much you love this genre and this sounds like it really is that, full-on horror.

Thanks, Kazza. It really is full-on, graphic horror and it will be disturbing to some. I hope I stressed that enough in my review. It was a true page turner, which is what I needed. I really enjoyed it.