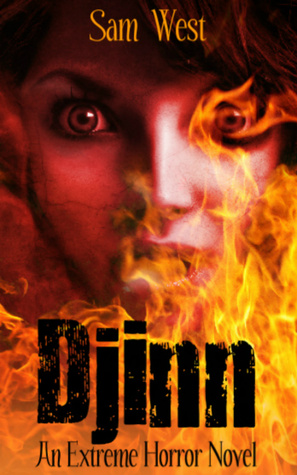 Pam Wilkins hates her life. She doesn’t have much going for her. Her boyfriend beats her, she looks like the back end of a bus and she’s skint. To top it all off, she cleans up other people’s sh*t for a living. While she’s at work scrubbing a toilet, a Djinn appears in a puff of smoke and grants her six wishes. All she has to do make her dreams come true is commit the most heinous, atrocious acts imaginable. Six wishes for six atrocities. It’s a no-brainer. Pam will do ANYTHING to get what she wants. But she soon discovers that the price she must pay is far higher than she ever imagined… WARNING FROM THE AUTHOR: This book is offensive. It is not intended for readers of a sensitive disposition. It is hardcore splatterpunk with lashings of violence, sex and gore.

What would you do if you lived a miserable life and was suddenly offered six wishes to make all your dreams come true? You could have beauty and more money than you could ever dream of. You could finally walk away from your loser boyfriend, who only uses you for a hole and a punching bag. You could walk away from having to work several jobs just to keep said loser boyfriend in beer and snacks. You could have it all. Would you do it? Even if the chance to do so involved doing things so horrific that they would make the worst horror/slasher film seem like a Disney movie? Or would you give up the chance to have all your dreams come true and stay with the dead-end jobs and boyfriend who gets off on beating you?

Pam Wilkins was given that choice.

While scrubbing a toilet at one of her dead-end jobs, a Djinn (aka genie) appears in a puff of smoke and offers her a chance to have everything she desires. For six wishes, she must perform six tasks. If she fails with even one of those tasks she will die, simple as that. There’s not much thinking on Pam’s part before she immediately jumps at the chance to finally have the beauty she has longed for and to never be forced to clean toilets again. She readily agrees and this takes her on a journey so disturbing that this reader (who can pretty much handle anything) found herself cringing more than once.

Note in the blurb where it states that Pam will do ANYTHING to get what she wants. That seriously means that she will do anything as long as she comes out in the end with all of her dreams coming true. From having sex with strangers (not that big of a deal) to pretending to be a hooker and getting paid for sex (wouldn’t be a big deal, but it turned out to be a major one), to murdering innocent strangers, and even doing things with homeless people and someone’s pet. She does each task grudgingly but focused on the end goal.

I am a huge horror fan, as most of our followers know. I can read the most graphic slasher book and not bat an eye. Murders so brutal and described on-page don’t faze me in the least. I can read books that have a lot of people cringing just from the blurbs and enjoy the hell out of them.  I thought I had read it all. I was wrong. The things that Pam was willing to do? I admit to more than one gag moment. Then there are my hard limits. Surprisingly, I do have a couple, though I’ll admit to not seeing them much in the books I’ve read to this point. Djinn: An Extreme Horror Novel had them all, I think. From scenes involving body fluids to the pet thing (I refuse to elaborate on that in my review). But, even if I found myself more than a bit grossed out a few times, I enjoyed the hell out of the story.

Sam West is a brand new author to me. I had seen his name on Amazon when I was seeking out horror books, but I’m always a little iffy about new-to-me horror authors because you never know what you’re going to get. I tend to stick with my tried and true who I’ve always managed to go back to again and again. But after reading this book, I will definitely be seeking out more of this author’s work. Yes, it’s disturbing. Yes, I wanted to throw up a couple of times with a couple of the scenes, but in the end, it’s extremely well-written and unlike anything I’ve read in a long time – if ever.

There is a twist at the end that I didn’t see coming and that’s a good thing. I can usually figure out how a book will be playing out before I get to 50% on my Kindle. That wasn’t the case (by any means) with this book.

Overall, an extremely well-written horror novel. No, it won’t be for everyone and I really need to stress that again and again. There is no romance nor are there sappy love scenes in this book. There are non-con sex scenes, graphic on-page violence, and various other things that a sensitive reader should shy away from. I am by no means a sensitive reader, but even I admit to being grossed out more than once. If you go to read this, I must stress – AGAIN – that you read the warnings in the blurb and my review. Don’t go into it thinking it’s something it’s not. That wouldn’t be fair to the author. If you want details of things not mentioned in this review, by all means contact me privately.

Splatterpunk? I have never heard of that before, but I know the things that happen in this book and, yes, you are a trooper, *shudders* But for a few readers I know on Goodreads, this would be a very good read. They love their limits pushed and pushed hard.

Great review, Cindi. You really made it come alive. You get a sticker for reading from Kazza, lol. Oh no, I think I’m a wuss!! *hangs head*

Thanks. I admit to being a big wuss while reading it, and you KNOW I’ll read anything.

I had heard the word splatterpunk before, but I don’t think I’ve read a book that can be accurately called that before this one and I’ve read a lot of horror books. It’s pretty much anything goes, with no limits. This book? Definitely had a little bit of everything and I can promise you that there were no limits. 😀

I love your embracing of the dark side. You are the Splatterpunk Queen now 😀

I shall continue to embrace the dark side… in books… only books. As much as I love horror books, you can’t pay me to watch a horror movie unless it’s a classic. Shh! We won’t tell anyone that. 😉