To Touch You by Cardeno C 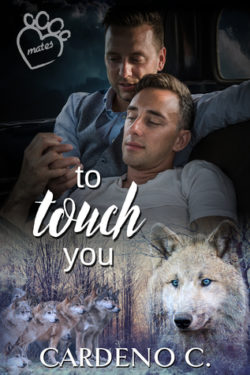 “His name is Salvatore Rossi. He’s a vampire. And he’s my true mate.”

By not relying on anyone except himself, Salvatore Rossi escaped a dead-end existence and reached the height of corporate success. But just when he has everything he always wanted, fate throws Salvatore a challenge he can’t solve alone and a young wolf shifter comes to his rescue.

Since childhood, Yoram Smith’s family was certain he would grow to become Alpha and save their beloved pack from its slow demise. When the time comes for a new leader, Yoram is forced to juggle his duty to care for a splintering pack with his duty to care for an absent mate, and his own strength suffers.

Being turned into a vampire didn’t alter Salvatore’s life philosophy: if you don’t rely on anyone, nobody can let you down. But when the boy who saved his life becomes a man who needs his help, the icy vampire must find his humanity.

“I’ll gladly give up forever to touch you.”

This is a very Cardeno C shifter book. What do I mean by that? A few things. It’s a light shifter and vampire fated-mates story with no drama. Sometimes one of the characters is young when they meet the other character but it’s all quite innocent. You know they are destined to be together down the track. Yoram is seven when he sees Salvatore Rossi for the first time on a street in their small town and claims Sal’s his friend. He doesn’t know Salvatore from Adam, Salvatore is there looking to buy land off his uncle. The intensity of Yoram’s he’s my friend insistence has his uncles soon sharing knowing they must be the fated glances. They don’t like Salvatore, don’t want him sniffing around them or their land, but one of Yoram’s uncles tells Salvatore to visit his doctor when he leaves town. Turns out he has cancer. When he comes back to the town he is terminally ill and Miguel turns Sal into a vampire to save him for when their nephew grows up. Being without your true mate is a bitch because a shifter only ever feels like half without them. Ethan and Miguel both understand and very much believe in mates because they are – a fated wolf shifter and a vampire – so they intervene for Yoram.

“You won’t hurt my friend, right, Uncle Miguel? When you say chat, you mean just words?”
“Just words,” Miguel promised. He stepped over to Ethan, held his hand out, and pulled him up. “I won’t hurt your friend.”

Also within the Cardeno C book is the completely selfless and likeable character, often lovable, and definitely very sunshiny – that would be Yoram. The other is more clueless and/or insular, it generally takes a while for readers to warm up to him. There is also one MC who is virginal, or close to it. In this book that would be (the now) twenty

seven year old virgin and alpha of the Miancaram pack, Yoram. He’s also the giver. Salvatore is a wealthy businessman from Las Vegas. He’s the clueless, insular one. Personally I liked them both. Could Salvatore get a clue? Maybe, but his entire life took a paradigm shift when he was turned into a vampire. Over the twenty years since he was initially turned he hasn’t aged. Sal has to eventually hire people to run his business, something that he always enjoyed and had run successfully himself. He also can’t go out during the day so he can’t keep standard business hours. He isn’t into the vampire scene either, so he becomes quite reclusive. Before he finishes up working at his business, a fourteen year old Yoram shows up at his office and Sal is pretty rough with what he says to an impressionable teen. He does it because he doesn’t want to be skeevy at forty four years of age with a teenager. Understandable. Could he have been kinder? I guess so, but a (shifter) teen with rampaging hormones often needs a definite I’m not interested.

Once Yoram is old enough he does a blood run to Sal because he knows he needs his blood and it also helps him out – but I won’t go into it in this review. Eventually Sal goes back to the town where Yoram lives and notices he’s grown up in all the right places. That he is also a good man. They finally develop a relationship but Yoram’s pack has been fragmented, rundown and fed homophobic lines for so long by bad alphas that he can’t have Sal on pack land. Yoram is trying to be a good alpha and get his pack cohesive and trusting. Yoram is also trying to make it work with Sal and Sal is reciprocating by giving into what he now feels and Yoram needs. Sal doesn’t understand it for a while but when he does it’s all rather endearing.

I’ve only read one in the Mates series prior to this book – In Your Eyes. I really, really liked that book. Korban and

Samuel had more overall history and intensity than Yoram and Salvatore. Did only reading one in the series cause any issues? Yes and no. I think knowing Ethan and Miguel better would have been a good thing but it isn’t mandatory. I will say that I fairly flew through this book and it didn’t seem like 260 pages. The reason I can’t give it 5 stars was because there’s a bit of quicksand in the middle around pack politics and other characters which distracted from Yoram and Salvatore. However, it’s nice, drama-free, easy reading, complete with a HEA. The sex doesn’t get going until around the 68% mark in the book, but then they hit it hard –  tying/knotting, the important use of mine and general hot times abound once they start. Highly Recommended for Cardeno C fans and lovers of sweet paranormal romance. 4 Stars!

With as desperately as he ached to tie with Sal, it only made sense that his mate craved his knot, even if he didn’t have the words to express that. And it was his duty and his pleasure to satisfy all of his mate’s desires. He pressed his nose to the side of Sal’s neck and breathed him in.

I remember how much you enjoyed In Your Eyes. I love a good shifter/mate story. This looks perfect – not a whole lot of drama and sweet. I read one by this author many years ago with one of the main characters introduced when he was very young. I never felt it was weird because nothing happened until years later.

Great review. I love the visuals and quotes.

Yes, there’s a few I’ve read by Cardeno C with that pattern, they write it well. This was a wholly enjoyable read.