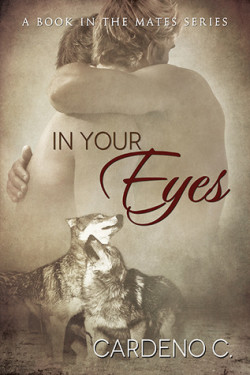 Raised to become Alpha of the Yafenack pack, Samuel Goodwin dedicates his life to studying shifter laws, strengthening his body, and learning from his father. Taking control comes easily to Samuel, but relating to people, including those he’s supposed to lead, is a constant challenge.

When Samuel meets Korban Keller, the son of a neighboring pack’s Alpha, he reacts with emotion instead of intellect for the first time in his life. Resenting the other shifter for putting him off-balance, Samuel first tries to intimidate Korban and then tries to avoid him. What he can’t do is forget Korban’s warm eyes, easy smile, and happy personality.

When a battle between their fathers results in tragedy, Samuel and Korban are thrown together. With his world crashing down around him, Samuel must save his pack and show them he can lead. But first, Korban needs to save Samuel by inspiring him to feel. Two very different men with a tumultuous history must overcome challenges from all sides and see past the rules they’ve been taught to realize they are destined to fit together.

The official blurb really does spell it our nicely. Samuel Goodwin is the Alpha presumptive of the Yafenack wolf shifter pack and Korban Keller the same for the Miancarem pack. They neighbour one another but the boys and their fathers could not be more different. They meet over the course of a decade at interpack council meetings and socially. The first time Samuel meets Korban he is thrown somewhat off balance by him, his smile, his observant navy-blue eyes and his ease of social contact. Nothing changes from the eight and eleven year olds they are at their initial meeting, until they are twenty three and twenty six.

Samuel is serious about being the future Alpha of the Yafenack pack. He is studious, he knows both the law and lore of the pack and wolf shifters in general. He is knowledgeable, gains a degree in accounting, and listens to his father’s words time and again about being a good pack Alpha. But his parents worry because Samuel lacks depth of emotion and an ease with people required to lead. Furthermore, he doesn’t have friends and he doesn’t appear to have ‘tied’ with another wolf. When he is eighteen his parents take him to the Miancarem pack for a social gathering of other young pack members, but Samuel just wants to be picked up early. He sees Korban again, he is just as bright and shiny, and Samuel still feels just as off balance around him.

Over the years Samuel develops a problem, he can’t shift back from his wolf into a human easily. He has to stop shifting as much as possible for fear of being lost to his wolf. Something that makes the frustrated and socially awkward Samuel even more aware of things he considers to be shortcomings. Something that ends up hurting Samuel.

While Korban Keller attends the same interpack meetings as Samuel, he differs. Where Samuel wants to be around his father and learn about shifters, Korban wants to run and be a young boy. The pair could not be less alike if they tried, but you know they are meant to be together and are going to be mates. It’s the telling of how that happens that makes In Your Eyes so good.

Events occur one night that change everything and pull the neighbouring 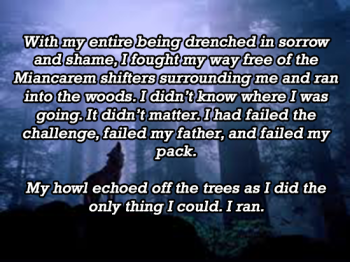 packs into turmoil, and Samuel loses a guiding light. Because of his loss, Samuel demands a blood tribute, he knows the law and he knows exactly what he is entitled to request. What he doesn’t bargain on is what will happen with that blood tribute request.

In Your Eyes is told from Samuel’s perspective throughout. In many ways that was a good way to tell the story. Without being privy to the internal thought processes of Samuel, he could be a hard character for some to identify with. Korban is bright, shiny and sweet. It’s very easy to love Korban. Not knowing so much about Korban’s inner thoughts allows Samuel to develop as a character while showing the differences between the two characters really well. I loved Samuel. I found him to be sincere and, while initially appearing unusual as a young boy through to a young man, I knew him very well as a person.

The sex is very good, hot, and I liked the fact that it isn’t forgotten that 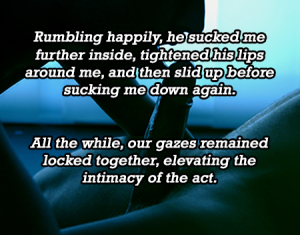 this is a paranormal shifter book. There was a delicious build to the pair getting together and some angst as well, without too much of one thing or another. There is also the fated mates, which I love in paranormal romance, and the feelings of mine. I must have that. Cardeno C  never fails to deliver the message that love is love. I also liked the respectful emphasis given to the fact that people can respect old teachings but adjust to a more contemporary slant. We need to change with the times – something Samuel thought had to be one way was not good for him or his life. He learned much and found his other half once he opened up to that.

Korban sighed. “I’ve said it before and I’ll say it again – just because we’ve been told we have to live a certain way in order to be whole doesn’t mean it’s true. Maybe my spirit is more connected to my human half and yours is more connected to your wolf,” he shrugged.

While In Your Eyes is part of the Mates series, it can most certainly be read as a standalone. It is a lovely opposites attract, contemporary shifter read with engaging, fully realised MCs, and well developed secondary characters. I fell for Samuel and Korban and I had some really strong reactions to events in the book as well. It tugged at my heartstrings and it made me smile. The well named In Your Eyes delivers a well paced, gay shifter romance with much love and a HEA. I hope to read more in this series soon.

ETA: I originally gave In Your Eyes 4.5 stars, but I have since re-read it and enjoyed it even more the second time around, so…5 Stars!

I love fated mates in paranormal stories. I always have. I also love opposites-attract stories so I can tell I’d love Samuel and Korban.

Great review. The photos are beautiful and I love the quotes.

Thanks, Cindi, The quotes were hard to pick and a few more are on our Pinterest board as well. I loved the pics too 😀

I agree, fated mates and opposites attract, always great reading. Samuel reminded me of someone I know so he really resonated with me, and Korban was gorgeous.

So excited for book 3. Just read one and two 🙂 couldn’t put them down!!

Really good reading, Brandy. I hope you enjoy In Your Eyes 🙂