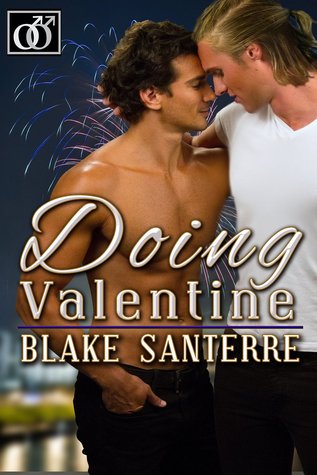 Stop by On Top Down Under on July 24th, when Blake Santerre will be popping in to chat with us and to offer an e-copy of Doing Valentine to one lucky reader!

Ivan ‘Valentine’ Vaughan, drive-time chick-magnet shock jock has made a career out of his chauvinist hetero persona. He is hosting a six-hour on-air charity fundraiser on New Year’s Eve.Dashiell Damon, radio morning show queen–and sucker for a good cause–agrees to fill in for Valentine’s co-host, Macy Cohen, against his better judgment.Between the serious tension between the men on air, the spiking ratings, the mounting charity pledges, the champagne and Macy’s best matchmaker moves–even in her absence–the two men do their damndest to withstand the powerful attraction between them.But when a caller offers them a thousand dollars for their fundraiser if they pash and post the New Year’s kiss on YouTube, will their off air fireworks finally fly?

I’ll start by saying that this short story starts off with a bang. If you enjoy gay erotica and like getting started with the naughty stuff right off, this is the story for you.

The nipple twisting, neck biting, ass ramming stranger was back in his brain again and Dash was damned if he was going to wake up without finally seeing the man’s face…

This is the first page, so I was definitely eager to read more. 😉

Dashiell (Dash) Damon is a popular radio DJ. He’s gay and this is fairly common knowledge. The bane of his existence is hetero-shock-jock DJ Ivan “Valentine” Vaughan. Valentine and his co-host, Macy, are popular with their radio audience because of the flirting banter that goes back and forth between them. Over the past year, however, the flirting has gotten a bit stale with the listeners – as have the ratings. It’s New Year’s Eve and Macy has taken off and left Valentine doing a charity show with none other than his bane of existence, Dash Damon.

For hours the two men have to take part in the charity radio show, stuck in the close confines of the radio booth. That quote above? From a recurring dream that Dash keeps having about a mystery man. The reader knows who that mystery man is not long into the story.

Valentine isn’t quite the person his public persona says he is. When he’s stuck with Dash – who is hot as hell – how is Valentine, the supposed straight DJ, going to be able to keep going with the charade when all he wants to do is bend Dash over the control panel? Dash isn’t fairing much better and this is made obvious when a caller offers to donate $1,000 to the charity if the two men will kiss and post a video of the kiss on YouTube.

This is a fantastic story. The banter between Valentine and Dash is hilarious. It’s obvious to everyone around (and those listening to them on the radio) that there is some major sexual tension going on. Will they act on it? Dash has no problem doing just that. He’s so there. He’s been lusting after Ivan “Valentine” Vaughan for at least a year. Valentine, on the other hand, has to keep up the sexist-straight-guy act, even if he too has been lusting after the other man for a year. What does it take for Valentine to be who he really is?

The sex in this story is hot as hell. There’s not a lot of it due to the length of the story, but what’s there is written very well. I wish it would have gone a few pages longer but I have zero complaints about how it ended.

Overall, a very hot and sexy read. The characters are all entertaining and I love the story of how the men have been lusting after each other from afar – and both been too scared to act on it. Dash, because he thinks Valentine is straight, and Valentine, because he has an image to maintain. Everything comes together nicely.

I look forward to more by this author.

Thank you! You’d love this story. It starts off sexy and stays that way throughout. The story (outside of the sexiness) is very nice as well.

I love the name of the publisher 😉 and the book sounds sexy too.

Of course you love the name of the publisher. 😉