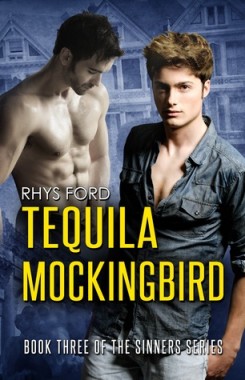 This review contains spoilers for the first two books of the Sinners series. There are none for Tequila Mockingbird.

I’m going to start right off with this – the ending. Rhys Ford did it to us at the end of Sinner’s Gin and then again at the end of Whiskey and Wry. We should have expected it with Tequila Mockingbird, right? I can’t say anymore about it other than this – I really, really hope Ms. Ford is working on the next book. 🙂

We met Connor, the eldest of the large Morgan clan, way back when. He’s the strong big brother who everyone always looked up to. He’s also straight. Well, about that.. maybe not. If you read Whiskey and Wry, you remember the ending where Connor had a conversation with his father about how he fell in love with someone – a man. We did not see that coming. I didn’t anyway, though I probably should have. Connor is, as most of his family, a member of law enforcement. His entire life has been spent looking up to his father and wanting to be like him. He wanted to be a cop (in his case a member of SWAT). He wanted to have the wife and kids and the white picket fence. His entire world turned upside down the day he held the son of a murder victim in his arms as the other man grieved his loss.

Before I go any further, I have to stress that this is not a gay-for-you story. Not in the regular sense anyway. It might have read like that had the author not made it clear throughout that Connor has always been attracted to men, but had never acted on it. I’m not a fan of the GFY story line so I feel the need to stress that.

The man he held is Forest Ackerman. This author writes broken characters well and she did not disappoint with Forest. Forest has a past that is heartbreaking and will at times make you angry. Frank, the murdered man, took him in and adopted him when he was a young teen. Forest’s biological mother plays a big part in this story and she is one of those characters you will hate with every fiber of your being. Frank was good to Forest and saved him even when he didn’t want to be saved. His mother had a pull on him that had him going back to her again and again.  Forest just wanted to be loved. Instead, he was exploited by the one person who should have loved and protected him.

After Frank’s murder, Connor finds himself almost stalking Forest, though I thought it was sweet. Frank owned a coffee shop and a music studio and both were left to Forest after his death. It’s at the coffee shop where Connor finds himself almost every other day. He can’t stay away from the other man and he doesn’t know why. There’s something there and he can’t shake it. When dead bodies start piling up and there are attempts made on Forest’s life, Connor becomes his protector. When one attempt comes too close for comfort, Connor finally realizes that no way in hell will he be walking away from the man he has fallen deeply in love with. It takes awhile for Connor to come to terms with his feelings but when he does, there is no stopping him. Forest has never felt anything remotely close to what he feels for Connor, nor has he ever had anyone love him. He’s starving for it. It’s more than a little heartbreaking to watch him in a few places because you know he not only wants the love and attention, but he needs it desperately.

Then there are the other characters we have grown to love in this series. Brigid and Donal, Connor’s parents. Brigid, God love her, was a bit more tame in this one than the others. She’s a fierce Irish woman who takes no prisoners. In the previous books, I found her to be a bit much. In Tequila Mockingbird, she was exactly who Forest needed. While Miki and Damien were overwhelmed by her love and attention when they first met her way back when (and even now in Miki’s case), Forest embraces it. Donal is still the dad (da) everyone wishes they can have. Miki, my favorite character ever of Rhys Ford’s, is there in his smart ass and humorous ways, along with Kane. Damien and Sionn are back as well, though Sionn, not as much as the others. Quinn, the only non-cop sibling (I think? There are a lot of Morgan siblings), makes a couple of appearances and he’s right up there with Miki as a favorite for me. Kiki, Connor’s sister, had me shaking my head a bit, though she’s another strong, take no prisoners, female.

Then there is the mystery of the story. I won’t go into a lot details about the killings and/or the bad guy because I don’t want to be too telling, but I will say that I was totally sucked in and was eager to see the resolution.

What did it for me (and others, from what I’ve seen) were Forest and Connor. I am heavily involved in the Sinners series, as well as the Cole McGinnis series.  I have fallen hard for a lot of the characters in both (with Miki being my fave), but I have to say that Forest and Connor are right up there. Connor is the sweetest, most patient, man. Forest had a horrible past but he doesn’t allow that to define him. Oh, his bitch of a mother tries, but Forest keeps going. He doesn’t feel as if he’s worthy of Connor, but Connor (and the rest of the Morgan family) assure him that he is. He’s more than he was as a child, a teen. Seeing the two men together, and working toward something with their relationship, is beautiful to watch. You can’t not love these guys.

There’s so much more I can say about this book but I’m not going to. I could go on about how amazing Connor is and how much I loved him more with each passing page. I can say the same about Forest, who had me wanting to hug him every time he was on page. The two men together are perfect. They are perfect for each other and perfect for the series. After reading Tequila Mockingbird, I will now have a difficult time saying which book (of all by this author) is my favorite overall.

If you are already a fan of Rhys Ford, you will love Tequila Mockingbird. If you haven’t read her work yet, I can’t recommend this series enough. Each book is centered on two different men, but at least one main character is one we readers have met many times in the past. The next book in the series will have two characters I have been eager to see have their own stories told. At the end (and I’m going to hope like hell no one gives that last line away) I was saying “Yes!” because of one in particular. I love this person and have since he was introduced. I can’t wait to read his story.

Glad you enjoyed this one as much as the others in this series. It’s nice to have good characters and a series that keeps on keeping on.
Great review, Cindi 🙂

Thanks, Kazza. This series keeps getting better and better. I loved Forest and Connor and I am so eager to see where the author is taking the series next. An outstanding book.

I just finished this book last night (well, early hours this morning…). Absolutely loved Forest and Connor’s story and can’t wait for the next book. It can’t come soon enough for me!

Didn’t you just love Forest and Connor? They are such a sweet couple. Like you, I am so ready for the next in the series. That’s one I’ve been hoping for but I can’t say more than that for those who haven’t read it yet. 🙂