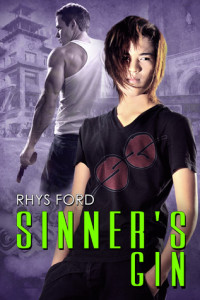 An outstanding book about how the past can come back to haunt in a big way.  There’s loss, love, violence and the reappearance of old memories that should have stayed dead and buried.

Miki St. John had just made it.  He and his band, Sinner’s Gin, had just won music’s biggest honor.  They were flying high celebrating the fact that they had finally arrived.  Then the unimaginable happened.  There was a horrific accident and all of the other band members were killed leaving Miki as the lone survivor.  Miki’s injuries were life-threatening.  His battered body lay in a coma for a long time.  When he woke up, he hid away from the rest of the world, mourning the loss of the other band members, one in particular, his best friend who had pulled him out of the gutter when he was younger, Damien.  Licking his wounds, Miki moves into a converted warehouse away from the spotlight.  A dog (later named Dude) adopts Miki, not the other way around.  Dude is all Miki has with the exception of Sinner Gin’s business manager, Edie, who is not allowed to visit.  Miki lives day-to-day in pain.  He rarely leaves his home.  He just wants to suffer alone.  There are no family.  No friends.  No anything except memories and Dude.  If the author mentioned the amount of time between the accident and Miki’s current situation, I missed it so I am unable to say how long Miki has lived basically as a hermit.

Kane Morgan is an inspector for the  San Francisco Police Department.  He rents space in an art co-op next to Miki so that he can indulge in his hobby, creating with his hands.. mostly with wood.  He has never met nor seen the illusive neighbor nor does he know who he is.  That is until a random dog starts stealing things from Kane while he is trying to create.  After one such time Kane gets furious and pounds on the neighbor’s door.  The meeting does not go well.  Another such incident occurs with Dude stealing something else.  It is at this time that Kane walks into an open area of Miki’s place and sees a dead body inside Miki’s vintage Pontiac GTO.  This is when the story begins.

Kane at first believes that Miki killed the victim.  This belief is added to when Kane finds out who the murder victim is and his connection to Miki’s past.  It doesn’t take long before that belief is out the window.  Kane saw Miki’s reaction to the discovery of the dead body and he knows that no one could fake that kind of reaction.  As more bodies start to turn up and Miki is threatened, Kane’s cop persona goes out the window and all he cares about is protecting this lost man… this lost man who obviously has a target on his head.  But can Miki get beyond the horrific things that occurred in his past to have a relationship with Kane?  It takes a lot to figure that out.

I mentioned this being an outstanding book and it really is.  The writing is excellent.  There is no sugar-coating the facts of what Miki experienced as a teenager nor in the way the murders are written.  The sex between Miki and Kane is exceptional.  The author didn’t write it rush, rush nor did she make it drag on for so long where I starting skimming paragraphs.  There is a lot in this book about what Miki endured as a child and as a teenager.  The latter being the cause for the murders that are taking place.  I found myself very sympathetic to Miki for what he had been forced to live with basically his entire life.  He finally got his feet on the ground (so to speak) only to lose the only real family that he ever had in the accident that killed his band mates.  I fell in love with Miki’s character on page one. He is all alone in the world without his best friend.  He’s scared to even admit to owning Dude because that would be an emotional connection and he wants to be done with anything emotional.  He wants to stay numb. Kane is also written well.  He’s a big, bad cop but not so big and bad that he could not see Miki for who he is. Kane comes from a very large Irish family.  I got a little aggravated with his mother on one occasion (pushy much?) but I got over it once I read more about the dynamics of the family as a whole.  Everything they did was out of love for Kane and each other, later including Miki in that circle of love.  That showed clearly.  This is overwhelming to Miki who has never had a family of his own.  He eventually grows to appreciate it and accept it.  The relationship between Miki and Kane was a pleasure to read.  Watching the two finally admit that they were meant to be together was beautiful.

Parts of this book are quite emotional but they are necessary to get a feel for what Miki went through.  There was one thing that I don’t quite understand but I don’t believe it was meant to be understood and I’m okay with that.

I mentioned what I loved about this book so I have to mention one thing that bugged me.  Not enough to take away from my love of the story but it’s a pet peeve of mine.  There is a lot of “the man” or “the cop” or “the singer” instead of “he” or “Miki” or “Kane“.  Occasionally in a book I can overlook that but I felt that it was overused in this one.

Then there is the ending.  I have to stress before I go any further that the ending with Kane and Miki was absolutely perfect.  The two men get their happily-ever-after and it’s written wonderfully.  Something (not pertaining to either man) happens at the very end that threw me.  I can honestly say that I did not see that coming.  This is in regards to another character completely.  This opens the door for a sequel and I thought that was the perfect way to end the book.  Normally books are so predictable.  It was nice for me to get a little shock.  It doesn’t happen often in the books I read.  I have one slight issue (a question really) in regards to it but I can’t mention it here.  One word about that and it will ruin the entire book.  Hopefully I will get those answers in a sequel… a sequel that I hope is being written as I type this. 🙂  Yes, I’m eager.

Overall, this is a fantastic book.  I have now purchased the other two books by this author and I will start on one as soon as I am done with this review.  This was my first by Rhys Ford.  It obviously will not be my last.  I highly recommend this.

Check out that cover.  Miki (in the front, obviously) is adorable.