They Come by Night, Tinnean 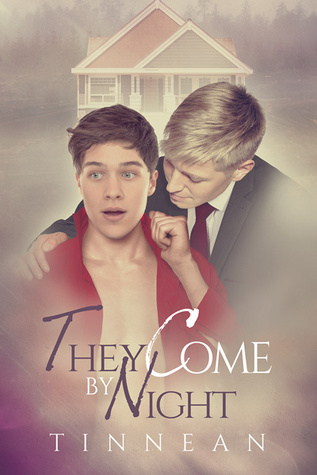 Imagine an Earth just a bit different from ours. It may be 2014, but in this world, normals unknowingly share the planet with vampyrs. Most vampyrs rely on bagged blood, supplemented by the blood of sabors—valued individuals whose blood contains an element needed for the survival of the species.

Tyrell Small has always felt different. He doesn’t know he is a sabor, but he has the birthmark to prove it. When his father reveals that he’ll be required to feed vampyrs, Ty decides to run away. Slipping out of his bedroom window, he finds the most gorgeous man he’s ever seen sitting on his roof. Adam Dasani is a vampyr, equerry to the vampyr king, who has given Adam the task of guarding Ty. The blood of the two most powerful saborese families in the shared history of vampyrs and sabors runs through Ty’s veins. And some vampyrs intend to use him to gain power, something Adam isn’t about to allow. Adam insists that Ty can’t escape his destiny, but they both find that destiny can take unexpected turns… and following those turns may put those Ty loves—including Adam—in danger.

I really felt for Tyrell, Ty. He was born a sabor and had his whole life dictated to him because of his parentage. His mother didn’t want him and so he was kept from most of his family, including his older siblings. But he had a great father who loved him, so at least he had someone.

As a sabor, it’s Ty’s job to feed vampyrs. He will fall in love with them the second he lays eyes on them, feed them, and fall out of love again when the vampyr leaves. But Ty doesn’t want that. He wants to feed and love his vampyr, Adam, and no one else. Adam doesn’t believe that’s possible because every sabor falls in love with the vampyrs they feed. Everyone but Ty.

He’s different. He doesn’t fall in love with the other vampyrs who want to feed from him. He turns most of them away, not all, but most. And he continues to love Adam. It’s strange and confuses everyone. Other vampyrs find it strange that Ty doesn’t fall in love with them, sometimes they aren’t very nice about it and it pisses Ty off. I really liked Ty and the fact he was willing to say no, but yes when he really needed to.

The relationship between Ty and Adam was nice. This book wasn’t as much a romance as it was vampire/fantasy book. That didn’t bother me because I sort of knew that going in. Plus I did like seeing things develop between Ty and Adam. The only thing I really missed from their relationship was sex. You see, since Ty is a sabor, he has to stay a virgin so he can remain pure to feed vampyrs. It’s something they both know and we learn early on, but it would have been nice if they could have worked around that.

Overall, this was a really well written book with a strong plot and a likable MC. I liked several of the secondary characters. I think most people who love vampire books will enjoy this since the world building is so strong.

Well, it sounds like something a little different within the paranormal sphere. Sabors… 🙂