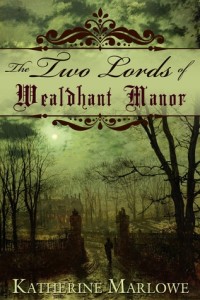 “I would say that it was a pleasure to meet you, Mr. Clarke, but under the circumstances I can’t really express as much. I don’t know what misconception has brought you to Wealdhant, but I must insist that you vacate the premises at once!”

“Vacate! On what authority, Mr. Waltham?”
“On the authority that Wealdhant Manor is not yours, and I would like to know what you think you’re about!”
“I beg to differ, Mr. Waltham!” Mr. Clarke objected, striding forward in order to return his glares more heatedly. “Waltham Manor is mine, you see, I have been discovered as the heir.”
“There isn’t an heir!” Jasper corrected him, bristling with anger. “What nonsense. After all these years!”
“In fact I am,” Mr. Clarke retorted…
.

This goes on quite a bit.

Just adding the above reminds me that there are a lot of exclamation marks throughout.

Sadly, the ghost story arc went nowhere and that’s a shame because the different versions of what happened were interesting.  It just wasn’t fleshed out well, or resolved. I had hoped for an interesting thread with reasonable page time. Alas, this wasn’t to be. I also believe the attitudes of the MCs toward said ghosts were more in keeping with a contemporary outlook than those of men in 1845.
.
Overview:

I feel that this book is full of missed opportunities. The Two Lords of Wealdhant Manor missed the mark as a romance and there wasn’t enough of anything else to make up for that. I can’t help but feel that this book would have been better without a romance and with a higher word count and emphasis on the new technologies and village life in and around the Manor. A friendship or alliance built between Algernon and Jasper. The battle against the railway with, perhaps, the acceptance of/or activism against progress. Ms Marlowe has a good command of the English language and also created a real sense of time and place.  However, if you label a book as a romance the reader needs to feel that’s what it is. There needs to be a pull of said relationship, the build. You need to enjoy the chemistry and the characters, you also need to feel the storytelling gripping you. Sadly, for me, The Two Lords of Wealdhant Manor lacked those vital romance elements.

It may sound as if this is not a good story. That’s not entirely correct, there were aspects I liked but the ones I didn’t like outweighed them on this occasion. But I will state that I would read more by Ms Marlowe in the future as I believe she is an excellent author in the making. It’s just that this book did not work for me.

For lovers of technically sound gay/LGBT historical reading, with a romance that has little to no steam, this may well be for you. For the writing, the nice turn of phrase, the excellent secondary characters and the setting it’s 2.75 Stars!

I’m a huge fan of books with ghosts in them so I’d have picked this up on that alone. I hate it wasn’t explored well. Also, I’m like you with the main characters. If I don’t ‘feel’ them, I can’t really love the romance.

I always feel disappointed when a book isn’t what I’d like it to be. Having said that, there appear to be a couple of good reviews for the book on Goodreads. So others may love it, that’s reviews for you – difference of opinion.