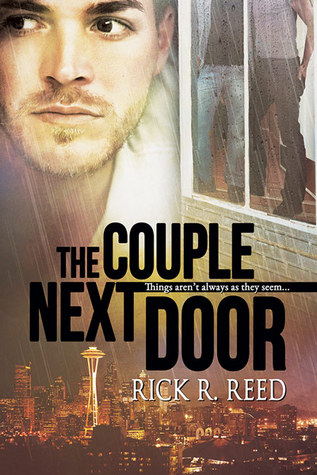 With the couple next door, nothing is as it seems.

Jeremy Booth leads a simple life, scraping by in the gay neighborhood of Seattle, never letting his lack of material things get him down. But the one thing he really wants—someone to love—seems elusive. Until the couple next door moves in and Jeremy sees the man of his dreams, Shane McCallister, pushed down the stairs by a brute named Cole.

Jeremy would never go after another man’s boyfriend, so he reaches out to Shane in friendship while suppressing his feelings of attraction. But the feeling of something being off only begins with Cole being a hard-fisted bully—it ends with him seeming to be different people at different times. Some days, Cole is the mild-mannered John and then, one night in a bar, he’s the sassy and vivacious drag queen Vera.

So how can Jeremy rescue the man of his dreams from a situation that seems to get crazier and more dangerous by the day? By getting close to the couple next door, Jeremy not only puts a potential love in jeopardy, but eventually his very life.

This is one of those “What do I say?” reviews. The entire book is one huge spoiler. Seriously. You’ll think you know what’s what but I swear you won’t. I’ve been reading Rick R. Reed’s books for quite awhile now. I know to expect the unexpected, but The Couple Next Door? All I can say is don’t go into it expecting a sweet romance where all the pieces fall nicely into place as the couple work their way toward that elusive happily-ever-after. There is a romance and HEA, sure, but they don’t come easy.

I will also say this before I go any further – If you read this, respect the author and future readers by not giving away ANY of the spoilers from this book! Some are slight, but most are huge, so be considerate if you review this.

Jeremy, thirty, is a single, gay man living in a old apartment building just trying to survive from week to week. He cleans houses for a living and barely scrapes by enough to pay his rent and for essentials. Jeremy isn’t unhappy, but he is lonely. His family lives in Ohio so they aren’t close as far as proximity. He has one bad date after another. All he wants is someone to come home to each night, you know?

Would it be so terrible to sleep with him? I mean, it’s been at least two weeks since I’ve enjoyed the charms of anyone other than Mr. Thumb and his four sons, so at least in terms of release, maybe I should say “Sure” and open the car door. If things go like some of my dates in the past, he’d follow me upstairs to my apartment and be back in his car in, like, fifteen minutes. 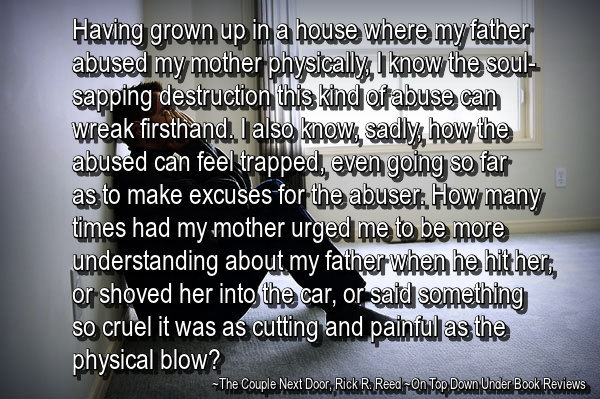 After one such bad date, Jeremy can’t get in his apartment building fast enough. The guy wasn’t a jerk or anything, but it was obvious to both parties that there was zero chemistry. Once inside the building, the thought of the bad date disappears in an instant. At the top of the stairs are two men fighting and before he has a chance to say or do anything, one is tossed down the stairs. Of course, because Jeremy is a good guy, he rushes to help the injured man, thankful he didn’t just witness a murder. The ‘bad guy’ is a bad ass. He looks the part. He dresses the part. The pure hatred coming off him in waves shows Jeremy that he’s not the type of guy he’d want to tangle up with… in any way.

Jeremy helps the injured man, whose name is Shane, and this starts a friendship of sorts. It’s fairly obvious (as time goes by) that both are interested in going beyond friendship, but Shane is living with a guy… an abusive one at that. Jeremy’s not stupid. He won’t be getting involved with someone who is already in a relationship, regardless of how bad he may want to.

Before long things start happening with the couple next door that give Jeremy pause. No, not just pause, they freak him out on a lot of levels. It’s obvious that the abuse isn’t a new thing. Shane has the scars to prove it. So why doesn’t he just leave the guy? Jeremy watched his mother as she kept going back again and again to his abusive father, so he knows the signs. Shane is convinced that Cole loves him and he constantly makes excuses for his behavior. It’s the classic case of an abused partner – blame yourself, say the other one will get better, or any of the other excuses for the abuse that can be thrown out there. Because Jeremy HAD seen it with his mother he tries his damndest to get Shane to leave the guy, all the while falling for him more every time he’s around him. It’s a dangerous situation for all parties, but Jeremy can’t seem to force himself to walk way. According to his sister Deanie (who is amazing) he’s a nurturer. He did it with his mother and he’s doing it with Shane. 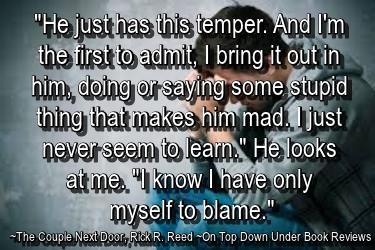 Eventually things take a very violent turn and Jeremy has to decide if he’s willing to stick things out for Shane or if he should walk way. Walking away would be the smart thing to do, but he just can’t bring himself to. Little by little secrets of Shane’s and Cole’s come out. When they do, the entire book takes a major turn.

I have to stop there. Saying more will be giving too much away.

There are a lot of twists in this book. Everything about the couple next door is a huge secret. I was fairly convinced that I’d figured them out early on, but I was wrong. That’s one of the main reasons I can’t stay away from this author’s books. I’m always finding myself being surprised. That was definitely the case here.

If you read The Couple Next Door keep in mind that not all is as it appears. Just when you think you’ve had an “A ha!” moment, you’ll be thrown for a loop.

Everyone knows I’m a big fan of Rick R. Reed so it should come as no surprise that I really enjoyed this. He writes the creep factor well and he didn’t disappoint here. There were so many surprises and shockers throughout that I couldn’t read the book fast enough. I recommend it to anyone looking for something a bit outside of the norm in regards to romance. The romance is there and there’s a nice HEA, but there are a lot of twists thrown at you as you watch the characters work for it. They definitely have to work for it.

You’re welcome, Rick. Thank you for another amazing book. 🙂

This sounds awesome. I love when a storyline keeps me guessing. Looks like I will be adding another one to my buy list. 🙂 I am so behind on my reading right now. Hopefully things will settle down after the holidays.

Thanks, Lisa. This book definitely keeps you guessing. You’ll think you know what’s going on, but you’ll be wrong. I hope you enjoy it as much as I did.

I hope you can catch up on reading soon. 🙂

In a first, I’m not reading your review, I’m just here to say I bet it’s great and I’ll come back later when I’ve finished it because I’m a bit of the way into the book myself.

Haha! It’s so rare for us to be reading the same book at the same time. 🙂 I look forward to discussing it with you when you’re done.