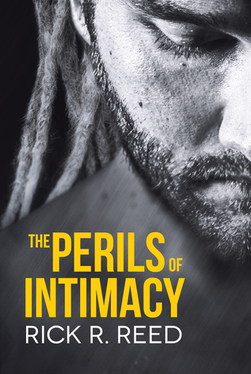 Jimmy and Marc make an adorable couple. Jimmy’s kindness and clean-cut cuteness radiate out of him like light. Marc, although a bit older, complements Jimmy with his humor and his openness to love.

But between them, a dark secret lurks, one with the power to destroy.

See, when Marc believes he’s meeting Jimmy for the first time in the diner where he works, he’s wrong.

Marc has no recollection of their original encounter because the wholesome Jimmy of today couldn’t be more different than he was two years ago. Back then, Jimmy sported multiple piercings, long bleached dreadlocks, and facial hair. He was painfully skinny—and a meth addict. The drug transformed him into a different person—a lying, conniving thief who robbed Marc blind during their one-night stand.

Marc doesn’t associate the memory of a hookup gone horribly wrong with this fresh-faced, smiling twentysomething… but Jimmy knows. As they begin a dance of love and attraction, will Jimmy be brave enough to reveal the truth? And if he does, will Marc be able to forgive him? Can he see Jimmy for the man he is now and not the addict he was? The answers will depend on whether true love holds enough light to shine through the darkness of past mistakes.

Real life has kicked my butt lately so to say I’m behind on reading and reviewing would be an understatement. But when I saw The Perils of Intimacy I knew I’d be reading it sooner rather than later for a variety of reasons. One, there’s an age difference between the two main characters – Marc is almost forty and Jimmy is twenty-three. I can’t stress enough how much I love books that have characters with a substantial age difference. Two, it’s about second chances. We all make mistakes but don’t always have a chance to make amends for them. Three, one of my all-time favorite authors wrote it. And, four, and this is the main reason I wanted to read this book – it’s about addiction. Sadly, I know addiction too well. I lost two very close family members as a result of it. There’s a line in the book somewhere that says that nobody asks to be an addict. They don’t. My family members didn’t wake up one day and say, “I’m going to drink this gin or take these prescription pills until I can’t live without them.” It was a gradual thing. One of them, a year or so before she died, said to me that she knew she had a problem when she was no longer wanting it but NEEDING it. She admitted she had a problem and tried to get help but it was too late. The other one went to her grave still trying to convince everybody that because a physician prescribed them that it was okay. Sadly, they never made it to recovery. Jimmy, in this book, did.

Jimmy is a server at a diner when he walks over to a table to take someone’s order. It doesn’t take long for him to recognize the guy as someone he met during his dark days two years prior. He was a completely different person then. Back then all he cared about was getting his next hit. If it meant hurting people along the way, he did what he had to do to make sure he got his fix. Jimmy is a recovering addict and the man – whose name turns out to be Marc – was one of the many men he slept with during the height of his addiction and stole from. Most of those men were quickly forgotten, but not Marc. He knew even then that there was something different about him. But that didn’t keep him from taking off with Marc’s stuff.

Now Jimmy is two years sober. He’s added some weight, gotten rid of his long dreads and piercings and is working hard to be the person he could’ve been before meth came into his world. Even recognizing the man in the diner he still takes a chance – he puts his phone number on the bottom of the bill. He knows it will likely blow up in his face if and when Marc recognizes him, but something has him doing it anyway. He wants to know him, to spend time with him. He’s a new man now and hopes for a second chance.

Then there’s Marc. Marc is shocked when the handsome, younger man shows interest. Not just shows interest, but actually leaves him his phone number. With the encouragement from his (awesome!) friend at work, Don, he calls and leaves a message. After a bit of phone/text tag, they set up a date. Jimmy is living in fear that he’ll be recognized. At that point, Marc doesn’t recognize him at all. Why would he? The guy who robbed him blind was thin, strung out, and had dirty long dreads. This guy? He looks like your typical boy next door.

But of course, the truth always comes out, as we know. This is when the story really took off. I admit that I was teary the entire second half of this book. You can’t help but root for Jimmy but you also sympathize with Marc because of what Jimmy (known as JD back then) had done to him the last time they met. You, the reader, know they’re going to get together and have their happily-ever-after. But these guys have to really work for it. Marc has to learn to trust someone who hurt him. Jimmy has to believe he’s worthy. 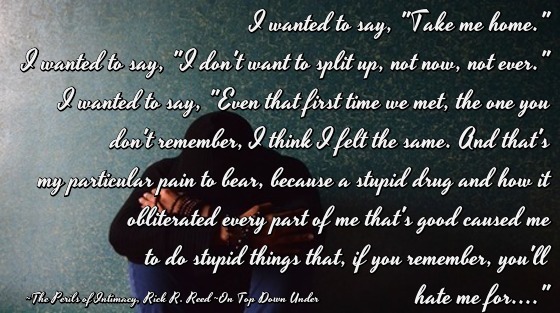 The author doesn’t brush over anything. The addiction and aftermath are written where the reader is feeling what the characters are feeling. Marc doesn’t just forgive and forget simply because he has this hot, younger man interested.

There are a couple of other things that happen in the story that I can’t say because I didn’t see them coming. I hope other readers keep them out of their reviews as well.

I admit that during the first half of this book I was on the fence about it. I kinda felt that things were happening way too fast and I wasn’t sure how I was feeling about that. But then things started to unravel for the characters and I realized that while the story is most definitely about romance, it’s more about redemption and second chances. Don’t take that to mean these two guys don’t get their HEA. They most definitely do. They just have to really work for it.

Then we get to the secondary characters. I want to put in a request to the author. Don has to have his own story. Don is Marc’s work friend and absolutely hilarious. He lacks self-confidence but isn’t shy about offering up relationship advice to Marc. Come on, he needs love too. 🙂 Hmm…. I could totally see Don and Kevin (Jimmy’s roommate) together. Just sayin’. 😉

There are other important characters, of course, but I can’t say anymore without giving things away.

Overall, this is a great read. If you go to read it grab tissues because you’re going to need them throughout almost the entire second half of the book. I applaud the author for the way he wrote about Jimmy’s recovery. There was no cure-all, all-is-well thing. Jimmy was still fighting his addiction every day of his life. I’ve read too many books that glossed over addiction and acted like because the character found love they’d never want to use again. In the real world we know it doesn’t work that way. If love was the cure for addiction both of my sisters would still be alive today.

I can’t say enough about how much I love the cover. Very rarely do I read books where the covers get it exactly right. This one definitely did. That’s Jimmy, or should I say J.D.

First off, this is one emotional and gutsy review, Cindi. I know this was a hard book for you to pick up, in spite of it being by RRR, maybe because of it. The subject matter is intense and clearly well handled. Addiction is so hard, a lot of people are affected by it and those who aren’t can be incredibly judgemental about it so I’m glad the author got it right and you enjoyed and appreciated it so much. Fabulous review and I love the (Miltonesque) quote with that picture <3 And that cover, you know how much I… Read more »

Thank you, Kazza. I think, because of my family’s history with the subject, I probably wouldn’t have picked this up had it not been written by an author whose work I know well. I’ve never read one of his books where he glossed over important issues and he definitely didn’t in The Perils of Intimacy. The story was good. The characters were REAL, not cookie cutter characters we often see these days. Both Jimmy and Marc had to fight – sometimes with themselves – to get to the HEA. There are also a couple of other important things that happen… Read more »