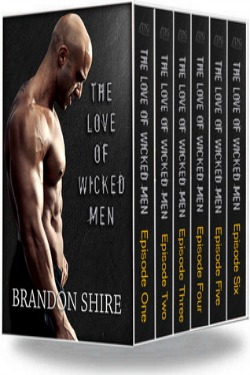 Sid Rivers and Jack Brown are two sides of the same coin. One is a lawyer with his own firm and dreams of money and power; the other is a criminal with a lengthy record and a quest for vengeance. When they meet, sparks fly. But was their meeting an accident? Or, was it planned by the billionaires who want to control their destiny?

This review is for all six episodes combined. Each story is available individually, so if you aren’t interested in reading about all of them, you might not want to read my review. I tried to keep spoilers out, but some may have snuck by me.

Before I go any further I have to point something out. I live in Mobile, Alabama (born and raised) and I am always hesitant when an author sets a book in my town, even if it’s only partially so. I’m actually not a fan of any books set in my state at all because the stereotypes are usually overboard, and in all honesty, I end up pretty angry before I’m done reading. I’ve enjoyed every Brandon Shire book I’ve read to date and I was concerned that the setting might make this an exception. Thankfully, I had nothing to worry about. I only mention that because a lot of people who know me know my feelings on books that take place in Alabama.

Sid Rivers is a ruthless attorney in Huntsville, Alabama. He’s not exactly well-known outside of his circles, but that doesn’t mean he doesn’t know how to get things done. He’s shady, but not necessarily illegal in the way he does things. Well, maybe a little bit. His partner at Rivers & Dunn, Larry, is quite a bit different from Sid. No, strike that. They are as different as night and day. Throw in that Sid is the one bringing in the cash with the firm while Larry takes the ‘safe’ cases, and it doesn’t take much for the reader to see what’s what with these guys. Of course Larry acts more important than he is, but it’s easy to see he’s not. 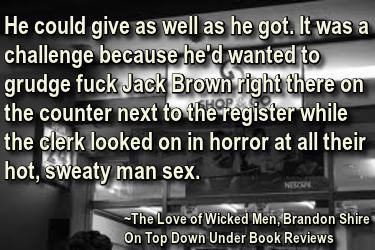 Sid makes a trip to Mobile to meet with a new client. I say “meet” but everything is hush, hush – from the initial meeting to receiving encrypted files. When Sid discovers what he’s being hired to do – or should I say who he and his firm are hired to go after, it becomes more than just a possible case that could go wrong. It becomes something that could destroy him and his small firm and could even get Sid and others killed. But money talks and there’s a lot of it coming to Sid and his firm if they do what they’ve been hired to do. Either way, successful or no, Sid knows too much and if things go haywire, the reputation of the firm would be the least of his problems.

The job wasn’t just a chance to step into the big leagues; it was also a warning. He understood what would befall him if he failed.

Then there’s Jack, who had nicked Sid with a knife while he was robbing a store. It all seems to be completely random. The attorney pops in the Shop-n-Go to buy whatever and walks in on a robbery in progress. A wrong time, wrong place type of thing. It takes very little time in the story before the reader is aware that this meeting wasn’t quite as random as Sid might’ve thought. 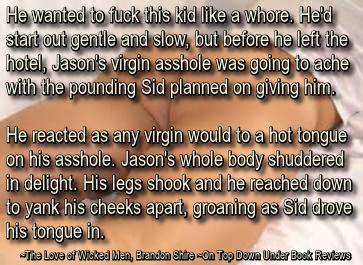 Sid hooks up with a guy in Mobile. The sex was hot as hell, but Sid isn’t the nicest guy in the world and he’s not ashamed of that fact. As the story plays out in each episode the reader is taken into the whys of his attitude and his all need drive to succeed, no matter the cost. I mention the guy Sid hooks up with in Mobile because, 1. The sex is damn hot, and 2. This comes back up later.

Now we come back to Larry, Sid’s law partner. It’s easy for the reader to tell early on that there’s more to Larry than than just being Sid’s partner. First, there’s his husband, who outright despises Sid. Larry does some things that had me shaking my head and it continued throughout the story. It’s pretty bad when I like the shady Sid over the so-called good guy.

Larry was a white, Southern, Christian boy who never knew a hard day in his life until he realized he was gay.

Throughout each episode more and more comes out about Jack. He has a team of people who work for him – Lori, Drake, Sweeny, and others – and I found myself constantly wondering who this guy was and what his agenda was. It turns out that Jack and Sid have something in common. I won’t go into the details here because they would be too telling. I will say that it helped me to have sympathy for both men. Don’t get me wrong, Sid is not a good guy. He’s all about himself and the bottom line. But for some reason these guys are perfect for each other, even if each time they are in the same room together things end up going south.

That brings me to something else. I have ‘romance’ listed as one of the tags. I’m not really sure this book can be classified as a typical romance. There’s a lot more to Sid and Jack than sex and whatever strange attraction they have for each other. I should also point out that while they are together quite a bit in this book, they aren’t together quite a bit in this book. You’d have to read this to get what I’m referring to. They also have sex with others a lot, but then again, this happens when they would never be considered a real couple. There’s also a bit of voyeurism going on. That, to me, was hot as hell.

With each new episode more information is revealed about Sid, Jack and the case that has strangely brought the two together. If you read this (and I hope you will), pay attention to every character mentioned. Yes, there are a lot and it’s a lot to process early on, but some of these random characters who are introduced aren’t quite as random as they appear. I had several A ha! moments, along with “I damn sure didn’t see that coming…” moments. I’ve been reading for a very long time. It’s extremely rare for me to be blindsided. I usually have things figured out early on. That wasn’t even remotely the case with The Love of Wicked Men.

Then there are other characters I mentioned above. Lori is a computer genius and works for Jack. Drake is a big bad ass who gets in and gets things done. Sweeny is your classic geek who you can’t help but love. Shy, but a genius when it comes to electronics. I adored him from his introduction. Lori, not so much. It took awhile to get a feel for Drake, but in the end, I thought he was pretty amazing as well. The same applies to Jack. He is who he is, others be damned. 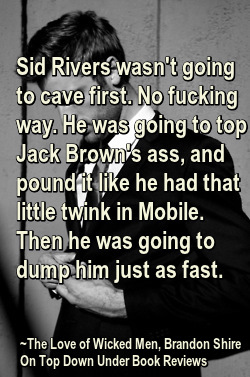 There’s this big control thing between Sid and Jack. I was anxiously waiting to see who would end up with the upper hand. It didn’t quite turn out the way I expected, but that’s a good thing. It happened exactly the way I wanted it to.

Eventually, Sid discovers that Jack is more than meets the eye. While he comes across as an “Aww, shucks” kind of guy in the beginning, he’s anything but. He has a lot of secrets and he’s not the person Sid thought him to be early on. Jack knows exactly who Sid is and he wants him… bad. The sex in this book is off the charts, with a bit of M/M/M action thrown in as well. While the sex may not have been on every other page, what was there was extremely hot. Actually, my favorite sex scene in the book didn’t involve Jack and Sid at all. 🙂 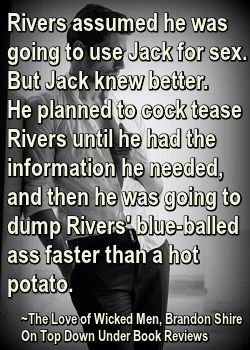 One thing I loved about this book is that you don’t know from one page to the next who the good guys are or who the bad guys are. Some are pretty obvious, but most aren’t. Some seem insignificant, but turn out to be very significant later. The reader is kept guessing throughout. That’s the sign of a great book to me.

I could go on and out about all 6 episodes, but I’d end up telling too much so I’ll stop here. I will say that I got sucked in with each one and couldn’t wait to see what would be happening next. The author asks at the end if the reader is interested in a Season Two with these guys. Yes. I want to know what happens next and I hope to see the story continue later. While pretty much every issue is resolved, there are still a couple of things left outstanding. If ‘the end’ was actually the end, I’m good with that. I do, however, hope to see more.

I’ve been waiting for this review and it was terrific. It sounds erotic-sexy, not a sex-fest, with a great story. Definitely worth reading and if I have any time ever again I will try to read this series.

Love the review and quotes and pics – hot 🙂 🙂

Thanks! There is quite a bit of sex in it, but it’s not on every other page. What’s there? Hot! You would appreciate it, I believe. 😉

This is a very good story. I’m glad I was able to read each episode back-to-back. I really hope to see more of these guys.