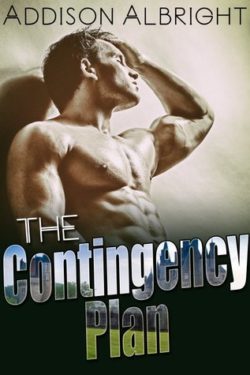 A sheltered prince. A sudden death. An unexpected choice. How will Prince Marcelo react to discovering he’s The Contingency Plan?

For eighteen years, there has been peace between Sheburat and the kingdom of Zioneven. The untimely death of a princess throws the marriage arrangement — the final phase to complete the terms of the treaty — into disarray, and the contingency plan is put into motion. Now the Crown Prince of Zioneven gets to make his own choice from among the princess’s younger siblings.

As a rare royal son in the matriarchal sovereignty of Sheburat, Prince Marcelo grew up knowing he would never marry. Never. Royal sons did not marry. Period. Except, Prince Efren isn’t from Sheburat, and he has other plans.

First off, don’t let the cover throw you, this is not a contemporary romance. The Contingency Plan is an alt-historical, fairy tale-esque story. I just wanted potential readers to know that because if you look at the cover, and us cover lovers can buy off that alone, then you might be in for a shock. Anyway, alt-historical, fairy tale-esque stories are my crack. I love the language, that anything at all is possible, that they are often gentle – this definitely falls into the gentle category.
.
Prince Marcelo of Sheburat’s twin sister has been betrothed to the Crown Prince of Zioneven since five and tomorrow is to be their marriage. Her very recent death has thrown everything into jeopardy. One of Marcelo’s sisters must be chosen in her place for the sake of peace and keeping two nations close. Marcelos’s next youngest sister, Kemble, seems to be the likely choice until Prince Efren chooses Prince Marcelo as the ‘contingency’, much to Marcelo’s dismay. He has never heard of two men marrying.
.

This is an enjoyable short novella. I liked the MCs and had a good feel for them even though it’s only 30 pages in length. The writing was nice, sweet, well edited, and the world was given some thought. I really would have loved for this to have been longer because I enjoyed the time spent in Sheburat, learning that Zioneven seemed like it would be a better place for Marcelo. There was no drama or upheaval, no difficult parents or siblings, just a surprise turn of events when Prince Efron makes it known which sibling he desires.

“Sibling. The terms of the treaty specify I may choose an alternate from among Princess Marcela’s younger siblings. It didn’t restrict the choice to daughters.”
Marcelo stiffened. What in the world could Prince Efren mean by that? Men didn’t marry men. At least, he’d never heard of such a thing occurring in Sheburat.
.
The other aspect of this story that interested me was that Sheburat is a matriarchal society, seeing the women as the powerful gender was a different spin, and I’m certainly all for girl power. No matter which tack the book takes, it makes the salient point of the need for equality. The more Marcelo learns about Zioneven, the more he comes to the realisation that there could be so much more to life for him there. It was nice to see Marcelo’s eyes opened to a broader world, one where there is educational, sexual and personal choices as options to those he was ever aware existed for him. That he is equally important.
.
“Although none of your sisters were found lacking, our diplomats felt you had the most empathetic temperament and an inquisitive nature, and those characteristics are highly valued in Zioneven.”
“I see.” Marcelo’s chest expanded with pride. He’d never been anyone’s first choice for anything. His whole life he’d been last in line. Last considered. Cut from lessons his sisters continued.
.
If you enjoy nicely written alt-historical reads, a virgin prince, a caring new partner, gentle MCs, then this is a very good little story. I wish it had been longer but, having said that, The Contingency Plan is still engaging, uplifting and whimsical. 3.5 Stars!

This looks like such a sweet story and who doesn’t love a virgin prince? 🙂

Like you, I’m known to buy books solely based on the covers so it’s good that you added what you did about this one. I would’ve seen it and immediately thought contemporary.

Yes, the cover does not match the book. I know there are budgets and so forth but I just wish more effort would go into some covers.

It’s a good little novella. My first by the author. I’ll look for some more by them now.