Swift for the Sun by Karen Bovenmyer 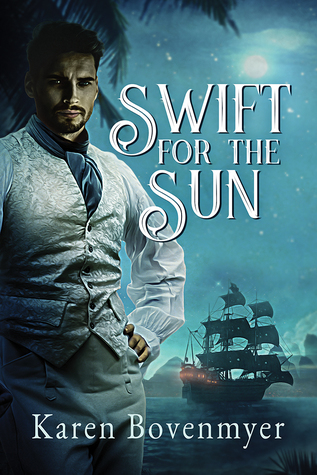 Benjamin Lector imagines himself a smuggler, a gunrunner, and an all-around scoundrel. A preacher’s son turned criminal, first and foremost he is a survivor.

When Benjamin is shipwrecked on Dread Island, fortune sends an unlikely savior—a blond savage who is everything Benjamin didn’t know he needed. Falling in love with Sun is easy. But pirates have come looking for the remains of Benjamin’s cargo, and they find their former slave Sun instead.

Benjamin Lector is the captain of The Swift, sailing the Caribbean on his maiden voyage, running guns, except he’s actually an imposter who happens to uncannily look like the real captain of The Swift, Benji Swift. Benjamin is biracial, mulatto is the term used in the time period in the region – the 1820’s from New Orleans to islands of the Caribbean. Benjamin has used inheritance money for the ship and the cargo. Initially I was somewhat sceptical as to how this could happen but it’s something that is explored as the book progresses. Benjamin knows little about sailing but his second mate, Black Miguel, makes him look good. A bad storm creates havoc and all life appears lost at sea except for Benjamin who washes up on Dread Island, a place superstitious seamen say no one returns from.

Benjamin has nearly succumbed to heat, thirst and hunger when he is eventually helped by a young man who speaks a mishmash of different languages, including a base guttural one, and is kind but feral. Who knows where he comes from and how long he’s been on the island alone? Sun has scars on his back which blaze white against his tanned skin and Benjamin can’t help wonder who put them there and why. For all Sun’s initial care, it’s forgotten when he tries to remove Benjamin’s pants after a boar gores him. Sun is trying to help again, but Benjamin’s reaction, his fear of his father’s hatred of his ‘sin’,  scares Sun away for several days. There is a lot to Sun that Benjamin doesn’t know but after Sun returns he cries long and hard in Benjamin’s arms.

The time spent on Dread Island was the best of the book, in my opinion. Sun takes a nearly dead Benjamin and helps him heal. The two young men become close, and using a pigeon English Sun learns to communicate with Benjamin. They hunt and gather and explore one another’s bodies, Sun’s horrific injuries become more obvious, including a semi castration. Benjamin wonders harder about what he must have endured. The weeks spent together makes the island seem idyllic, not at all like the island of sailor superstition. Time spent learning things about the other was sweet, albeit cloaked in certain secrecy because of Sun’s fear of his deeds scaring Benjamin off.

Both men have their own demons, Benjamin’s mother died when he was younger which meant losing the parent who was gentle and loving. His father was a preacher, and while on an island with food, water, healthy living, and the freedom to love whom he wants, Benjamin wages an internal battle as to why God or Jesus would be against something that feels so right to him. He fights the deep-seated ghosts of his father and his upbringing about feelings of attraction to men.

Everything about Sun fit so perfectly, except that one piece. How could this be wrong? My father’s beatings for my own good, the laws of the Carolinas, the cruel jokes men told—all of it to stop something so beautiful from happening.

Irrespective of new beliefs forming, Benjamin still has some major difficulties escaping an inculcated religious canon, and the entrenched thinking of the period.

Sun was a wonderful character. I did not disagree with anything he felt, even if he did kill, especially when there were some people he felt like killing. He’d had to endure the toughest life, taken when he was a boy from his family, used brutally by men, made a slave, and then did what he had to survive on an island by himself.

Some men in Sun’s past turn up on Dread Island and the book becomes a bit rocky from there on in. There is rape and non consensual sex acts, I read this all the time but it felt out of place within the overall feel of the book and writing. These men want to force Sun back into slavery, and I found Benjamin to be somewhat judgemental of Sun’s behaviour from time to time, too quick to succumb to ideas not just affecting him. His insistence that Sun not kill someone who raped and tortured him because of Benjamin’s belief in God and Christian principles frustrated me. Benjamin was a good man at heart, but that doesn’t mean he didn’t annoy me.

There are grand adventures following the exit of Sun and Benjamin from Dread Island on, including Ladrões do Mar, corsairs, matelotage, a trial, people with more titles and lineage to their name than breaths to spit them out in one attempt; as well as spies, fights, making peace with crew members, and atonement. All roads lead to Tortuga, with Sun’s crimes and past following them. Can the men outrun it, and do they have a future together?

The good and the bad:

I really liked the first 50% of this book and I liked the last 15%. In between were too many names, too many situations, use of several languages and their instant translations that bugged me, and a few info dumps about history in the region that weren’t necessary. They tamped down the innocent and slow-burn chemistry that initially arose between Sun and Benjamin. The author needed to maintain that chemistry throughout while building upon it with action, adventure and history. There was some nice stylistic language used which gave the book a sense of the period, and I really loved Sun, warts and all, but I have to deduct 1.25 stars because that 35% I wasn’t so fussed on became a bit cheesy and unpleasant in an out of character way, and somewhat convenient.

There were some lovely moments that I enjoyed as well. It always melted my heart when Sun called Benjamin my Benjamin, how from the beginning he looked out for the man he loved. While there isn’t a lot of sex in the book, which I found apt, there are some steamy moments between Sun and Benjamin.

We wrapped our bodies around each other, kissing, touching, taking off clothing when it got in our way. I felt the need for him burning through me, so hot it hurt my chest.
“Sun.” I whispered his name again and again. It was my prayer and my salvation.

There’s also enough action, and a woman played a strong secondary role amongst it all.

This was a pretty decent historical gay romance with one of the best protagonists, Sun – I really enjoyed the book a lot more because of him. While it didn’t make the 4/5 star cut, it was still a book I wanted to finish. I needed to know how everything turned out for Sun and Benjamin. I can see a number of readers who enjoy historical gay romance really enjoying this book. The writing gives a sense of time, plus the excitement and trepidation two young men hold for their future. It has a fitting ending for the period and should make readers happy. 3.75 Stars!

The premise of this story seems really interesting. I can tell I’d adore Sun. I think I’d be a little iffy about Benjamin because of his somewhat judgmental attitude toward Sun. It looks like a nice read though. Great review.

Sun is a gorgeous character, a mix of things I like – a survivor, sweet but also not… because life can suck. Benjamin was a product of his environment and naïve. It was a nice gay historical but it lacked that extra oomph.