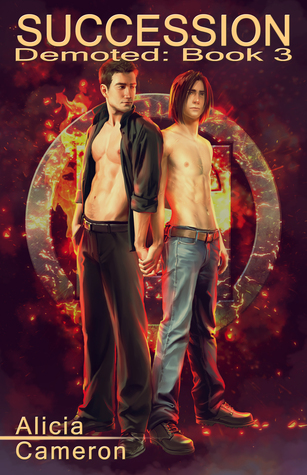 After the news breaks about Cashiel Michaud’s involvement in research to undermine the Demoted system, he and Sascha find themselves detained as a legal case develops. Separated, they work from both sides to get released, making sacrifices and arrangements along the way. If they do reunite, will they be the same?

Sascha and Cash face a number of threats from the outside world, and some from the people closest to them. When they don’t know who to trust, their plans and their relationship are put to the test. And the results of this test could affect the world. (M/M+ – See publisher’s website for content labels.)

THIS IS BOOK #3. PROBABLY BEST TO READ THE OTHERS BEFORE THIS REVIEW.

Succession has a funny start, it begins during some chaos then jumps back six weeks to shortly after the shit hit the fan at the end of Sedition. Sascha released some research data to thwart Kristine Miller having their project shut down and Cashiel placed in jail, with Sascha probably tortured and/or murdered. It was a smart plan but Kristine Miller is not the only player in town and things are still dicey.

In this third of the Demoted Trilogy, there are several arcs going on.

The third book in the Demoted trilogy, while still tense, isn’t as hardcore as the previous two. There is more sex in this book and an interesting ménage is introduced. Cashiel is my

man. It’s funny how feelings change, when I started reading he was too aloof and clinical for me, but as the series progressed Cashiel won me over. I do love a flawed character. I also love the sweet and mouthy Sascha, if I was in his position I could not help myself but say something, so I understood how he could create problems. Sy was a very, very nice addition. Stoic, masculine, caring, uncomplicated, patient and loyal. Sy is very, very loyal. A quality of paramount importance in this time and place. 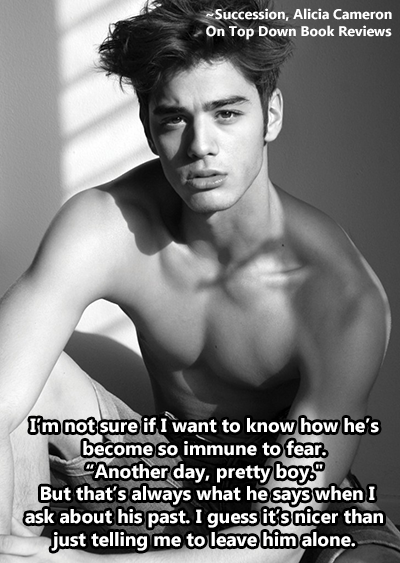 expected from book #1, Subjection. This has been an interesting journey. It may not have taken some of the turns I was hoping it would, but the trilogy made up for that in ways I wasn’t ever expecting – things I can’t say because I’ll spoil the book. The primary characters were strong. The secondary’s were equally as interesting – good or bad –  whether they stayed for the ride or got off along the way. Cashiel and Sascha had me hoping for the best and as far as I’m concerned that’s what was delivered. That another party was added to the mix was fine by me and the character added was delicious. I honestly think Sy is a character most writers can only dream of popping into their mind, their writing. The Demoted is excellent darker reading for those, like me, who enjoy their gay erotic romance edgier. I sincerely hope that Alicia Cameron hasn’t finished here because there is a lot that could happen with these guys. She definitely has an excellent platform to expand further. However, if this is the end, if I must say goodbye, then I’m content with where/how it finished. 5 ‘Pretty Boy’ Stars!

Extra Zing on our Tumblr page

What a fantastic review. I know your love for this series. I’m glad #3 didn’t disappoint. I can’t say enough about your photos, GIFs and quotes. I especially love the one of the three men, but man the one of the guy crying got me all sappy. 🙂

Thanks, Cindi. #3 didn’t disappoint and I’m glad to have read the trilogy. I know the author intends to add some background on Sy, so that’s something to look forward to 🙂

PS: You sappy thing, you, lol

This sounds amazing. I have to read #2 & 3. I read subjection after your review and it was edgy like you said. Dystopian and dark are some of the best ones to read for my taste. 🙂

Thank you, Jana. You definitely have to read books 2 and 3 because the trilogy gets even better than the first book. I know what you mean dark, and even dystopian, have become my thing lately 🙂

I have been MIA for ages, I didn’t know this was out and have been DYING for it’s release. If I hadn’t come in here I wouldn’t have known.

Thanks again for keeping up with the awesome books most others seem to overlook guys! I’m downloading it now!

Thanks, Paul. I look forward to your thoughts.

I was just thinking about you the other day, how you hadn’t been about much. Hope you’re well… and you need to read this so we can compare notes 🙂