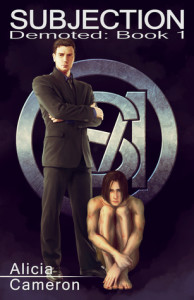 In a world where intellect and achievement are valued above all else, a young man risks everything to save his brother from a life of slavery. Thrown into a harsh, unyielding world where slaves are treated as less than animals, Sascha struggles to come to terms with everything he knows being ripped away from him, but a life of success could never prepare him for his life as one of the Demoted. Sinking lower and lower, Sascha begins to lose hope, but the whim of a mysterious, wealthy man has the potential to change all that.

Cashiel has a dark history that he guards carefully. Between family and business and politics, he rarely has time for a slave, much less a lover. But when he sees a young man who reminds him of the very history he is trying to escape, he makes an impulse decision that he’s not sure whether to regret or not. The slave could expose everything, or he could be the most valuable asset that Cashiel has ever acquired.

Cashiel and Sascha share desires, hopes, and a home. Each man is limited by status, hindered by history, and desperate to succeed. The question is, will that be enough? (M/M – For content labels and excerpt, see details on publisher’s site.)

My heads up. The blurb for Subjection is pretty in-depth and gives potential readers plenty to work off. I’ll add this. It is dark. It contains non-con/rape, punishment and cruelty. Psychologically, it’s one big trigger and could be very upsetting for anyone who cannot handle the concept of someone owning a human and treating them with utter contempt. You also have to be good with sex in a quasi-relationship that has a massive power imbalance – in other words, it’s not fluffy slavefic, it’s edgy slavefic. The majority of this book is spent in a darker mindset or intense state. So maybe bear all of this in mind, because you either like that kind of reading or you don’t.

Cashiel Michaud acquires a slave for his Peace Day escort; a big occasion requires the privileged to have someone pretty on their arm. But the newly acquired slave on his arm, while looking the part in latex body paint and strategically placed rhinestones, is anything but a high class escort. He was a torture slave at a 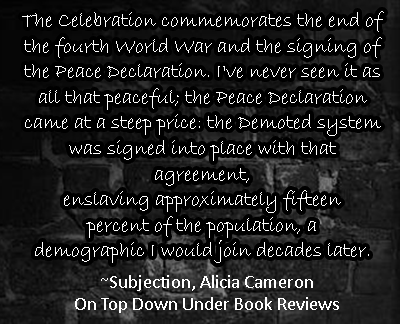 low-brow whore house when Cashiel’s best friend, Bobby, told him he had his eye on someone interesting for him.

For once, we look less like a detached master and a used up whore, and more like a businessman and his high-class escort.

Cashiel ends up buying Sascha because the mistress is going to beat him to a pulp and because he shows glimpses of potential – he can count cards and has some (covert) attitude. What Cashiel doesn’t think about when he buys Sascha is life with a slave after the Peace Day event is over. The boy who cowers, seems poorly trained, and is already half starved, continues down the path of not eating, and can’t answer questions easily or (understandably) truthfully, and is something of a… bother to Cashiel.

“I had planned on selling you, when I bought you,” he hesitates, still calm. I guess he can be calm; he’s not the one whose life gets passed around like a used hov-car.

Sascha is a Demoted. He deliberately rigged the ‘Assessment’ – used to work out who the brightest are for their society. His twin brother, Abriel, would have been Demoted if the academically 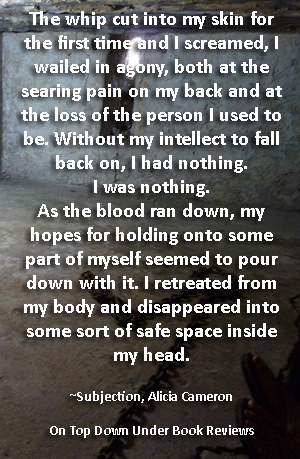 accelerated, yet problematic, Sascha didn’t intervene as he did. The Assessment is like studying for your final high school exam with the added pressure of ending up Demoted and in re-education if you don’t get good results. Being a Demoted is brutality disguised as an overall social benefit. Re-education is touted as helping with overpopulation, job shortages, and diseases that require new treatments. In reality, the Demoted are forcibly sterilised and given manuals and correction on how to be the best slave they can be and are forced to have sex with the guards and each other. Those who don’t comply, or are deemed useless or too difficult, are placed on the blacklist and used for experimentation or as organ donors. The Demoted are government-sanctioned slaves, and, basically, human guinea pigs.

As I lay there in the dark, I reached down and gingerly ran a finger along the small line of stitches from the vasectomy. It was such a little thing, but it changed me forever, just like the Assessment, just like the choice that I had made. 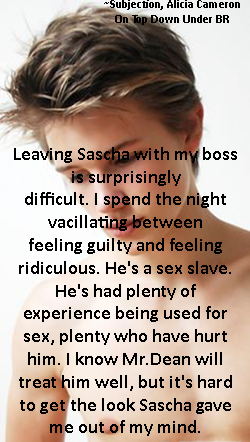 So Cashiel and Sascha end up together, but it’s not a match made in heaven. It isn’t about romance. Cashiel has a commodity who could come in handy, and in the meantime he has someone who cleans and cooks. Cashiel is not the worst master by any stretch, but he’s cold and a product of his upbringing. He punishes Sascha, threatens to sell him, gives him to his boss for a promotion to advance his plan and position. He’s also perfectly okay setting Sascha up if things hit the fan re: his research that Mother Dearest foiled several years ago. He also has moments of feeling something for Sascha, apart from annoyance and frustration, and being (potentially) quite likeable, in amongst the normal void of his emotions and his consuming need to be one step ahead of his mother.

Sascha is smart but the re-education and Bethel’s Brothel beat him down to the point where he is emaciated, has some tendon injuries and has been both physically and emotionally scarred. He finds it hard to locate any emotional equilibrium in his life and is quite broken. But Cashiel, while being in his head, is his best hope for a better life in this society. He does things for him – like medical care, giving him access to a computer, and more – that Sascha hasn’t had since before being Demoted.

Just some extra points about the book –

The alternating points of view are both good and bad. Sometimes they progressed the story nicely and gave the reader insight into both men.  Sometimes they didn’t. But Cashiel needed a POV because he’s hard to like. He would take a step forward and several back throughout. Even by book’s end I was still frustrated by him, but I’m guessing there’s much more to come. I will say this, he’s intriguing, and has much untapped potential. And that’s important. If I’m just meh about a character, forget it. I was never meh about Cashiel.

Kristine Miller, Cashiel’s mother, is heinous. She’s the architect of the Miller 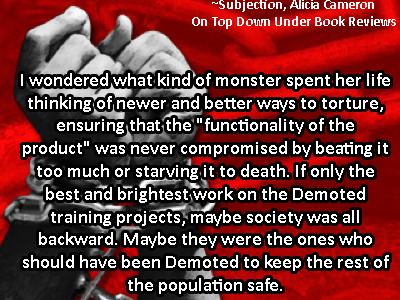 System, the new and improved re-education of slaves which was adopted universally. She’s very well written – smart, makes the skin crawl with her false claims to decency and being a caring parent. She is the perfect antagonist, along with the society created, and she is very much a dysfunctional dystopian doyenne.

The psychological hits were pretty good. Sascha’s interactions with others made me feel angry and disturbed at such an uncaring system. It subtly – and not so subtly – highlighted those people who pay lip service to the treatment of others who are vulnerable, but in reality they don’t give a damn. Some of the worst possible individuals are those who have power and pretend to care but action things that contradict compassion.

The narrative is quite clinical and this serves the book well for the most part. It adds to the feeling of a morally flawed society. The haves and have nots. The fear of failure. The dread of being owned and having no rights. The matter-of- fact way people are shown to have little concern for fellow human beings. But it could also leave the characters somewhat at arms length for me. 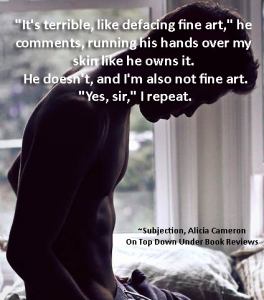 the MCs. I want fire from Sascha and passion from Cashiel. Cashiel needs to become less detached and more open – he also needs a big belief adjustment, but that takes time and if it had happened suddenly I’d be sceptical. Sascha requires an injection of the rebellious spirit that’s within. I need to fall in love with at least one of these guys next book, and I’m counting on this happening as it progresses. Having said that, Subjection has a very addictive quality to the writing. It makes you want to turn those pages and keep reading to see what’s going to happen next – even if that makes you shudder or want to slap sense into someone. It elicited definite and strong emotions from me as I read, and that’s a big key in my reading needs. I liked that both of these men are products of environment but are trying to buck a micromanaged and cruel system. They may be on different plains at the moment as to why they’re doing it, but I’m hopeful that will change dramatically over the next books.

The books end is not a cliff hanger, but it’s subdued and at an in-between place. There’s a lot of momentum to be gained between the characters, the projects and research that Cashiel is working on, and his decision to involve Sascha.

Why didn’t Sascha rig the Assessment so both he and his twin, Abriel, passed the dreaded test? Did I miss something?

Sascha changes psychological position on (not) wanting to die in a breath, which had me scratching my head.

Then again, I don’t want to die, which is annoying. It would be easier if I wanted to die. I want to live, and I want to stay with my asshole of a master.
…

Perhaps I had failed a little bit on the last part, but I’m not complaining, not really. I’m just giving up on life and trying to die.

I just found it contradictory as Sascha is still Demoted, as he has been for the past three years, and has survived so much worse previously in re-education and after, so his primary position hadn’t changed.

The book has a good plot but it did get bogged down at times with some repetition that could have been edited more ruthlessly to make it leaner with more impact. The reader understands that Sascha is scared, terrified of being sold, jumpy, cowers, and why. The reader also gets Cashiel’s frustrations at Sascha and his background.

I’m definitely on board for the next in this series. I want to see, I want to know where Cashiel and Sascha go from here. There’s much promise. I need to  experience what awaits them both – I’m sure there will be a lot of ugly in there as their story progresses but it’s par for the course with the nature of the beast. Recommended for people who like slavefic that is darker and who don’t mind a non-standard romance and also don’t mind waiting for a possible/maybe impossible HEA. 4 Stars!

Review copy supplied by the author in return for an honest review.

This sounds so good kazza. I haven’t heard of alicia cameron before but i have to fix that. Great review i’m going to check it out. 🙂

Alicia Cameron was new to me as well, Jana. Very good reading, I hope you do read it and enjoy it . From memory you like a dark book 🙂

This looks like an interesting, yet disturbing, read. I can tell I’d likely attach to Sascha right off.

Great review of what I can tell is a good start to a series.

Thanks Cindi. It is a good start to a good series, I believe trilogy. Nice and dark with interesting characters. Very “Kazza.”

Very interesting premise and the review makes me want to check it out soon. 🙂