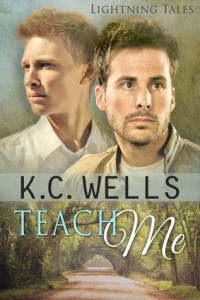 Nick Tremantle has had a rough ten months. His professional life took a nosedive, and then his mom’s health took a turn for the worse. In a short space of time, everything changed. So when he spies the young man hitchhiking, Nick pulls over – he needs all the Karma he can lay his hands on. But when the identity of the young man is revealed, it sets in motion a chain of events that unfold quickly, changing Nick’s life completely.

Alex Nordmann’s life has definitely not gone the way he’d planned. Gone are his dreams of an education and living his life ‘his’ way. He’d thought the worst was over, until the morning he decided to come out to his parents. It just goes to show, people will surprise you every time. For instance, who could have foreseen that the man who gives him a ride – and an unexpected lifeline – would have been Alex’s first crush all those years ago?

Alex has no idea what’s coming at him….

Nick Tremantle is a teacher in Florida. One particular day during spring break, when things are crowding his mind and he’s not feeling in the mood to be home alone, he takes a scenic detour. When he’s heading towards the local mountains he spots a guy in a hoodie hitch-hiking. He decides to pull over because Nick is concerned about the young guy’s demeanour. He gets more than he bargained for because it turns out to be an ex student he last taught eight years ago, Alex Nordmann.

He’d been driving about ten minutes when he spotted the hitchhiker in the hoodie, a backpack slung over his shoulder. The figure was standing by the side of the road, shoulders hunched forward, head low. There was something familiar about him even at a distance, his features hidden by the dark gray hood that shaded his face.

Alex is having a bad day. He came out to his parents who didn’t like the news too much. There was no screaming or yelling, but he was told that it wasn’t what they expected or wanted from their chid and it was best for him to leave. Not knowing what else to do, he decides to leave for Orlando where the chances are better of securing a job than in Eustis.

Nick won’t hear of Alex leaving like this. He knows things are troubling him. He knows Alex was a good student and had a scholarship at college but is obviously no longer going. Turns out that Alex is in leukaemia remission and had to take several years off to have chemo and recuperate. He’s still  tired, so college had to be on hold and Alex figures he won’t be able to get back in. He also felt that since his parents were supportive during his illness they can handle this news. He believes it’s best to be open about who he is – major illness will do that to you. Now he has something else to think about because he’s on his own and he’ll have to get a job to support himself.  Nick lets Alex know he can stay at his house to get fully on his feet. Nick’s not only been a good teacher, but he’s a good listener and a caring guy.

Alex isn’t the only one with some baggage. Nick has issues of his own that he 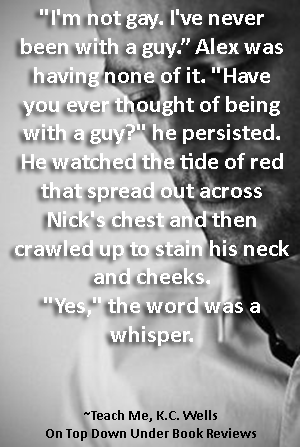 hasn’t discussed with anyone but Alex pushes because he knows something’s  bothering him, and not just because he no longer lives in the better part of town. On top of another issue, or two, Nick is well and truly in the closet and doesn’t know how to come out. He’s thirty nine, attracted to men but never been with one.

There’s a slow burn in this story. Both guys have crushed on the other without either ever knowing. Both guys are more about relationships than causal sex… and now they live under the same roof. Someone needs to make the first move. Will the teacher be schooled at last? Or will they both have enormous blue balls? It’s a gay romance so we can all guess the answer, it’s just nice reading the story and getting there.

This is nice. Sweet. Cute – that’s the best way I can describe the overall story and writing. There’s no big dramas or angst in Teach Me. There’s no antagonist threatening in the background. It’s all about the relationship development of the MCs. I’m not the usual nice, sweet, cute reader, but when I feel in the mood for it, this is pretty much the kind of book I’m looking to kick back with. I’ll certainly be reading more in this series now I’ve discovered the author. Highly recommended for lovers of gay romance. 4 Stars!

Based on your review, I can tell I’d love this. I love the ex teacher ex student thing and sometimes I just want… sweet. It looks like this delivers.

Thanks, Cindi. It’s nice when you like a sweet, romance-y read, and for some people that’s a whole lot. For me, it’s in between the nasty, lol

Thanks, Trisha. I don’t often read the sweeter romance books, but there are a couple of authors who write sweet stories that I enjoy. I enjoyed this 🙂