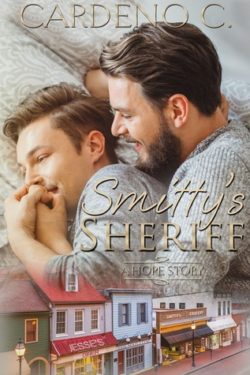 Retired soldier Richard Davis wants a stable life in a quiet town with a forever man. Becoming the sheriff of Hope, Arizona, accomplishes two of his three goals, but instead of finding a serious partner, he falls for too-young-to-be-committed and too-flakey-to-be-serious Todd Smitty. Richard won’t find the right man if he’s obsessed with the wrong one, so he walks away from Todd.

It’s lust at first sight when Todd meets his sister’s army friend. He sets his sights on the worldly, strong, stable older man, and the more time he spends with Richard, the harder he falls. But after three years together, Richard cuts off all contact with no explanation.

When a mutual obligation requires Todd to move into Richard’s house, he’s thrilled at the opportunity to earn a second chance. Ignoring Todd from across town was hard enough. Can Richard resist temptation under his own roof?

Boy, I struggled with this book. Richard infuriated me throughout. He was so condescending and conflicting in regards to his thoughts about Todd, who I have to admit also bothered me. For god’s sake, think of yourself as someone worthy of the best people in your life, especially if that person is someone you want as a significant other. Todd used to be in an odd relationship with Richard for about three years until it broke down. Richard was upset that Todd hooked up with other guys but it wasn’t discussed and Todd was left unsure of what happened. However,  Todd wants back in Richard’s life, although it’s hard to know a lot of things in regards to Todd because he’s quite insipid. Todd’s sister leaving a baby with Richard presents an opportunity for him.

I just kept thinking that Todd needed to take some time to think about himself. He needed to like and believe in himself a lot more, he needed to be independently happy before jumping (back) into a relationship with anyone. It needed to seem like it was more than being bored and Richard was the best he could get. Mostly, that Richard was better than him and that’s what relationships are about, someone being better, not a partnership or feelings of equality.

He wasn’t as smart as Rich, wasn’t as experienced in anything, didn’t understand the laws and politics in Rich’s job. Todd couldn’t give useful advice or solve anything, so talking to him was a waste of Rich’s time.

Richard’s jealousy was infuriating. Tip 1 : If you have issues about someone having sex with others when you never talked about monogamy in the first place, someone you only saw here and there and never introduced to others anyway, then you have no cause to be ticked off when they do hook up with others. First off, communicate like the then thirty seven year old man you were, the forty one year old you are now. Todd is in twenty four, tell him what you feel. Show him. Sort your shit out with a therapist. Or know you can’t do it, move on, and don’t come back to a relationship with the person you are struggling the most with. Deal with your jealousy. When a guy delivering pizza has to leave without being paid because he’s accused of something he wasn’t doing with Todd : Houston, we have an unpleasant problem.

Tip 2 : Don’t offer to allow someone you are in a (quasi) relationship with to go though your phone simply because they are jealous and insecure, when you have not done anything wrong. Nope. That’s being disrespectful to yourself and it’s also enabling bad behaviour that will, contrary to fictional romance, only get worse.

“The password to my phone is your birthday. Go look at my call history so you can see I wasn’t talking to anyone. I didn’t clear my tasks so the video is probably paused on my screen. You can see that too.”

I can deal with the little things that I don’t always like in a few romance books – head bobbing, which seemed to be in overdrive in this book, the cutesy ‘kays, the fluttering eyelashes, the also cutesy uh-huhs. But I really like- love Cardeno C’s characters and they normally take over the page in a positive way. Not this time. I just could not connect, and further, I didn’t like them. When the MCs in a romance are going to have sex and I make the sign of the cross muttering, “please no. Please. No!” That’s both sad and bad.

I am certain there’s readers out there who will enjoy Smitty’s Sheriff – those who like an age gap, the lack of real angst, that this is a contemporary gay romance, complete with HEA. I really enjoyed book #2 in this series, Jesse’s Diner, but this one didn’t work and I am bummed because Cardeno C is a usually ray of bright sunshine in my often darker reading world. You can’t love them all, and this one left me flat. 1 Star!

Richard is the type of person I despise in the real world. No doubt I’d hate him in the book too. Todd kind of seems like a doormat, another type of character I’m not a fan of. Great review.

Yeah, these guys did not work for me. I generally love Cardeno C’s characters and the amount of 4 and 5 stars reviews I’ve written for their books backs that up, but, as we both know, books and characters don’t always work for us.