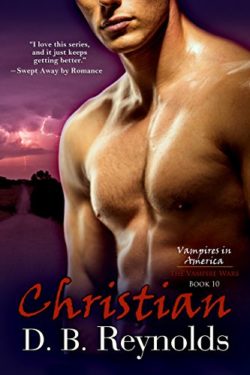 They want him dead and her enslaved . . .

Texas . . . the heart of a territory that stretches from the golden deserts of New Mexico to the turquoise shores of the Florida Keys. It’s big, it’s rich, and it’s the next battleground for some of the most dangerous vampires in the world.

Christian Duvall . . . charismatic and powerful, and determined to claim the South as his own. But with old enemies and new fighting to stop him, victory suddenly takes on a brutal, and far more treacherous, edge. Because what one of his enemies wants more than anything else already belongs to Christian . . . and her name is Natalie.

Natalie Vivant Gaudet . . . brilliant and lovely, a strong Southern woman who can unravel the most intricate financial schemes designed to swindle and steal. She loves her complex job and the simplicity of her life. And then she meets Christian. He’s beautiful, he’s complicated, and she’ll fight to keep him alive.

With allies trying to kill him, and enemies readying a horde of zombie vampires to roll over all of Texas, it will take every shred of Christian’s power and Natalie’s determination to win this war and give North America a brand new Lord of the South.

Christian Duvall is a European vampire who refused to take part in the plot against Raphael by Mathilde, his mistress/sire, and opted to take his chances in America – Deception. Because this book is enmeshed with the characters in Deception and Vincent. I recommend you read those books first. At the time of the events in Hawaii, Christian was visiting another European Vampire Lord in Mexico and discovered that the Lord of the South was soon going to be stepping down, and that Lord Hubert has every intention of challenging for the territory. A polite abdication is not something that happens in vampire circles. Normally territories are fought over, often to the death, but Raphael no longer supports Anthony. Anthony makes all the right noises about contracting back to his home town of New Orleans and supporting the challenge, which is based out of Houston. However, we soon learn that Lord Anthony runs the South like the most disreputable politician, with no intentions of being true to his word or his supporters, and with no sense of honour. Anthony also underestimates both Raphael and Christian. He is also too keen to lead from the rear and allow others to face dangerous situations of his creation.

“Fucking Noriega,” Marc muttered.
“Fucking Anthony,” Christian corrected. “Sending one of his own children to die. He had to know Noriega couldn’t best me. You know—” he said thoughtfully. “I was prepared to let Anthony retire to New Orleans when I become Lord of the South. But now . . . I think I’ll have to kill him.”

Christian visits Raphael before he decides to challenge, out of respect and an unwritten protocol, and I loved seeing Raphael and Cyn through his eyes. Neither fully trusts him after Mathilde’s attempt on Raphael in Kauai, he’s from her court, but they’re prepared to hear him out. Having Raphael behind any challenger and (potential) Vampire Lord is important and Christian is no fool. Raphael is technically the Lord of the West but he wields power over the North American Council and the territorial lords are loyal to him. It’s why America is cohesive, unlike what’s been happening in Europe for centuries, and part of why Christian wants in. Raphael also has Sophia in place in Canada and Vincent in Mexico. Vincent is a part of this story because Hubert is wreaking havoc in Vincent’s new territory, raising an army of zombie-like vampires to use in his challenge for the South. Technically, the more vampires behind a lord the more power they can syphon from them, and the lords who are not benevolent, like Hubert, use and abuse the power. In contrast, Christian has made one new vampire during his lengthy existence, his lieutenant, Marc, and out of necessity brings another into the fold, Scovell, but he is powerful in his own right. 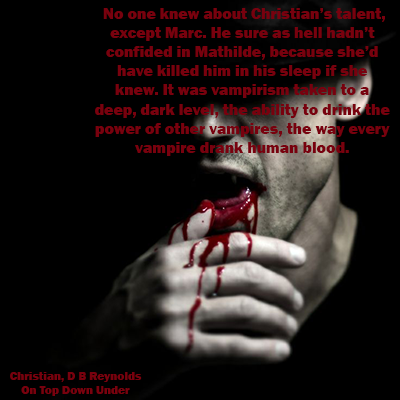 Natalie Gaudet is a forensic accountant who has been employed by Anthony for the past two years. She is attempting to untangle the mess that Jabril left behind. The previous Lord of the South, Jabril created major problems when he turned and enslaved one of the Hawthorne sisters, trying to do the same with the second, and took over the Hawthorne Trust and Estate. Like Anthony, Natalie is originally from New Orleans, and is supposedly a cousin of Anthony’s, but he’s a very distant one and is more likely to use family members to get his way than care about any of them. Now Christian has turned up and appears very interested in Natalie, Anthony has decided to step up his intentions for her himself, and he doesn’t care how he goes about making Natalie his possession. He believes Natalie to be a proper Southern lady, someone who will look good on his arm and do as he says when his plans come to fruition and he rules New Orleans. To say Anthony was the ultimate anachronistic creeper is an understatement. While Natalie may not be the most experienced with men, she is no shrinking violet when it comes to Anthony’s increasingly despicable and erratic behaviour, and Christian’s necessity to kill challengers doesn’t phase her either.

You get both POV in the book, and while it is a tad insta-love, I bought it because I really liked both Christian and  Natalie. They have chemistry and make a good couple, I can see them being another power couple, and characters are a big part of what makes or breaks a book for me. Natalie uses her forensic computer skills to help Christian at a pivotal moment, and she isn’t sitting around waiting for the cavalry to arrive when she finds herself in hot water – and I laughed at Cynthia’s present to Natalie, even if it was for some… interesting reasons. Natalie is also quick to fire humour at Christian and he likes her that way. Christian is suave, alpha and a coffee connoisseur – you have to appreciate a coffee-loving vampire.

In amongst the action and the romance, the overarching plot of the war between European and American vampires is heating up even more and I can’t wait to see where it all goes. The sex was hot and was the in right ratio to the paranormal plot and UF elements. This book ends with details leading into the next one, Lucifer, and I can’t wait to revisit Sophia and her mate Colin, although I know it will be under difficult circumstances. Because Cyn and Colin have history in the trenches together, so to speak, I’m really hopeful that Raphael and Cyn will make more than a cursory appearance.

Christian successfully heralds in book #10 in the Vampires in America series, a series that is still going strong. I’ll be reading book #11, Lucifer, very shortly. May Vampires in America continue for years to come, but I think I’ll also visit The Stone Warriors series next. 4.5 Stars!

“Christian is suave, alpha and a coffee connoisseur – you have to appreciate a coffee-loving vampire.” <—-Now that's my kind of man, um, vampire. 🙂 I can tell I'd like Christian and Natalie together. I'm glad that another female in this series isn't a shrinking violet. It's always nice to read books with strong female characters. Anthony sounds a lot like current (and real) politicians in the South now.

I really like them both, and he’s your (vampire) man, he loves his coffee and even has a big-arsed professional coffee machine, lol